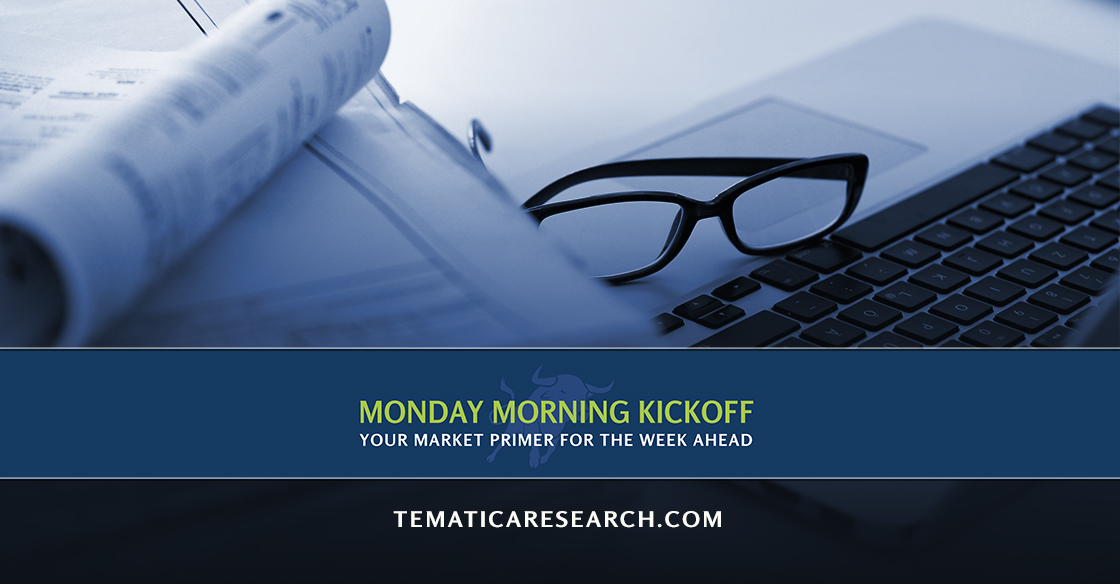 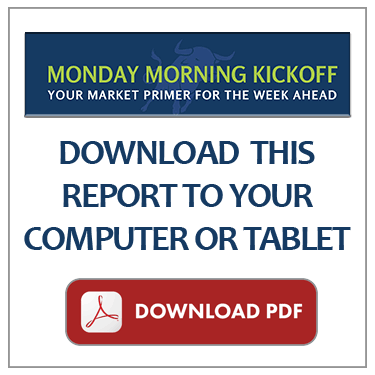 After a weekend that was filled with news and analysis surrounding the impact of Hurricane Irma, we’re doing our best to turn our attention to what’s going to be the focus on the trading week ahead. There is something distinctly unnerving seeing equity markets relatively calm when mother nature is tossing a whopping 4 apocalyptic-like disasters our way — Harvey, Irma, the earthquake in Mexico, and now Hurricane Jose. But then if the South Korean Kospi doesn’t care about North Korea rattling its nuclear sword, then we suppose the S&P 500 might not be terribly fussed about nature tossing a little Armageddon our way.

Make no mistake, we too will be putting pencil to paper as we follow up on those companies that are likely to be hit by Irma, as well as those that are likely to see a pull forward in their business as rebuilding gets underway. If you missed those thoughts, as well as our larger recap of last week — including all the DC drama and what the latest economic data told us — you can find last Friday’s Weekly Wrap Up here. The title alone should tell you there was far more going on that the debt ceiling deal, Harvey fallout and getting ready for Irma.

Turning our focus to the coming days . . . this week we’ll be looking at:

Outside of the economic data, there are a number of items that will catch investor attention, but with relative certainty, we can safely say that most will be paying close attention to Apple’s (AAPL) “special live event” on Tuesday, September 12. Because Apple touches a number of our investment themes, we too will be watching the event to separate fact from internet rumor and innuendo over the company’s next iPhone, Apple TV and Apple Watch products, as well as any other surprises.

We previewed what we’re expecting on last week’s Cocktail Investing podcast, and at a minimum, it’s safe to say that for at least a few more quarters Apple’s fortunes will be largely tied to the iPhone. Late last week, it was reported that Apple is facing a month long production delay for the new iPhone. In our view this means one of the most critical things to watch as it concerns expectations for Apple’s current quarters is the ship date for the next iPhone.

With an eye on our Tematica Investing Select List, we’ll be looking to see how many new iPhone models Apple launches this week and how many of those models include organic light emitting diode displays (OLEDs). There has been much speculation over this and Apple’s investment of $2.67 billion in LG’s OLED production for smartphones certainly fueled those thoughts. Outside of Apple, other smartphone, TV and wearable manufacturers are embracing OLED displays all of which is pressuring the currently capacity constrained industry. Disruptive Technologies companies Applied Materials (AMAT) and Universal Display (OLED) are both positioned to benefit from increasing OLED capacity, and wider spread adoption of the technology, respectively.

Other Thematic Data Points We’ll Be Looking Out For

In three weeks, we shut the books on the current quarter and before too long it means we will once again be hip deep in quarterly earnings. While the earnings calendar has thinned considerably in recent weeks, there are several reports coming our way this week that we will be watching. Among them is results from Food with Integrity contender United Natural Foods (UNFI), which has Whole Foods as its largest customer. As most are probably aware, Whole Foods was recently acquired by thematic investing poster child Amazon (AMZN), and we’ll be parsing through comments from United Natural Foods for any insight on Amazon’s plans for this business.

Recent sales and traffic data has pointed to continued struggles for the restaurant industry. This week we’ll be hearing from food service supplier and distributor Farmer Brothers (FARM), and it’s quarterly results as well as its outlook should put some perspective on the near-term state of the restaurant industry. In particular, we’ll be looking for signs of the shifting preference for “food that is good for you” products, a key driver of our Food with Integrity investing theme.

On the other side of the spectrum, Cracker Barrel (CBRL), a company whose business is more related with our Fattening of the Population theme, will be issuing its quarterly results as well. Also on deck next week is earnings from Oracle (ORCL), and odds are those results will be a litmus test for enterprise IT spending.

The End Of The Current Quarter Is In Sight

Following the usual sparse corporate news flow in August, we suspect investors will be focusing on the rash of upcoming investor conferences to revisit and fine tune expectations. Here are several of the conferences that we’ll be keeping tabs on as they pertain to our Aging of the Population, Connected Society, Cashless Consumption and Economic Acceleration/Deceleration investing themes:

Each week we look for data points pertaining to our 17 investment themes, or as we call them Thematic Signals. These signals can be confirming or they can serve to raise questions as to whether a theme’s tailwinds are strengthening or ebbing. Be sure to check out the Thematic Signals section of our website to read more about these stories and others we publish throughout the week. Here are some of the highlights we saw this week:

Last week there were several noteworthy cyber attacks, the most impactful being the one at Equifax (EFX) that compromised personal information such as Social Security numbers, birth dates, addresses and driver’s license numbers as well as credit card numbers for approximately 44% of the entire population of the country! A few senior executives sold $1.8 million worth of shares in the days following the breach that were not covered under any regularly scheduled sales. They reportedly knew nothing of the breach, hmmm.

Top management isn’t immediately informed of a data breach affecting nearly half of the people in the country? We suspect there is a lot to follow in this story. (You can go here to check if you were one of the millions impacted.)

Also last week it was reported the hacker group known as “Dragonfly” attacked computer networks at U.S energy companies. These attacks and others like them serve a reminder of the widening set of targets for cyber attacks, and this pain point bodes well for IT budgets to shift their spending to favor cyber security.

As we discussed on the most recent episode of the Cocktail Investing podcast, Facebook’s (FB) original video-viewing hub, called Watch, is now live for everyone in the US on the mobile and desktop versions of Facebook, as well as Facebook TV. During the summer it was reported that Facebook was in talks with Hollywood studios to produce scripted, TV-quality shows, with an aim of launching original programming by late summer.

With its 183 million active daily users in the U.S. exiting 2Q 2107 (roughly 56% of the current U.S population), Facebook has the potential reach with Watch to disrupt the grip that TV has on advertising dollars. This move also thrusts Facebook into the “content arms race” that we are in the thick of as it competes for viable content with new content players Amazon, Apple, Hulu, Netflix (NFLX) and exiting ones like Disney (DIS) and Time Warner (TWX).

Cash-Strapped Consumer
Consumers Looking for Ways to Stretch Their Dollars

The Fed’s latest annual Report on the Economic Well-Being of U.S. Households offered some depressing, yet confirming data for the current condition of the Cash-Strapped Consumer. The report’s findings revealed that nearly a quarter of Americans are unable to pay their monthly bills on time, and nearly half have less than $400 in the bank. A separate study published by HowMuch.net found that in most areas of the country, the average working-class household is running a spending deficit.

Taken separately or together these two reports point to shoppers looking for ways to stretch their spending dollars where possible. This likely means recent restaurant and retail pain is poised to continue, as consumers continue to favor eating at home, shopping at Wal-Mart (WMT), Costco Wholesale (COST) and scouring both Amazon (AMZN) and the internet for savings and deals. In our view, this makes Harland Clarke acquisition of online coupon site RetailMeNot earlier this year a smart move.

At its 2017 WWDC event, Apple showed how Augmented Reality (AR) can disrupt the gaming industry, but it is the beauty products industry that is embracing AR to improve the consumer digital shopping experience. We see other retailers mimicking the move by companies like Sephora to win over consumers as they continue to shift toward digital shopping platforms at the expense of brick & mortar retailers.