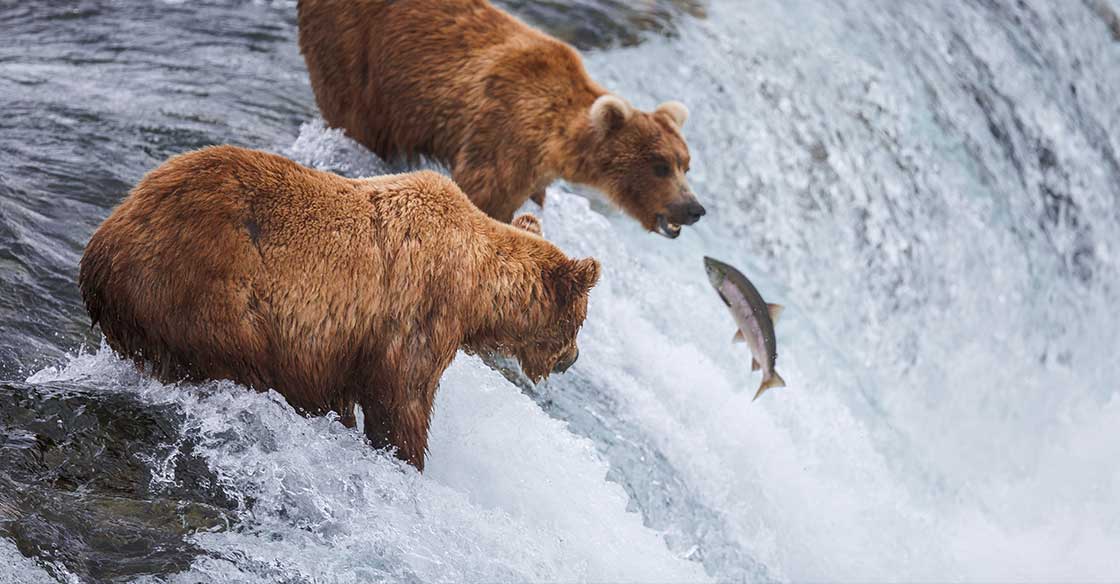 We’ve been bearish on shares of Blue Apron (APRN) and we’ll try not to pat ourselves too hard on the back as we take a victory lap on that call. 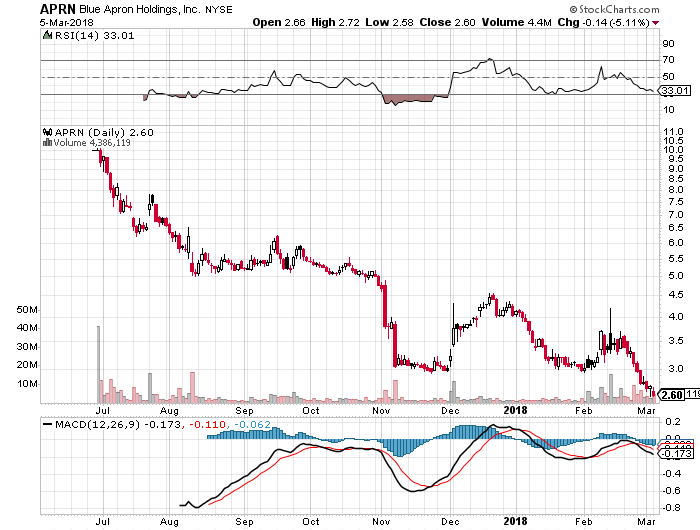 As we saw yesterday, there is a good reason to remain that way as Walmart (WMT) is formally getting into the meal kitting business. While many were expecting Amazon (AMZN) to leverage its Whole Foods Market business with its own meal kitting offering (we still are), Walmart is leveraging its position as the largest grocer to enter the fray. The goal for the brick & mortar retail giant is to help build its digital footprint as well as take share from the restaurant industry, which has been pressured by weak traffic and average ticket pressure. Odds are Walmart is also looking to ride the consumer shift toward healthier eating and snacking that is part of our Food with Integrity theme along with a hefty dose of our Connected Society one.

All in all, this looks like a good extension for Walmart and one that is poised to make an already challenging environment even more so for Blue Apron.

Another company that has been running into a significant thematic headwind is GNC Holdings (GNC). Once a dominant player in the sports performance and nutrition space (otherwise known as body-building), the supplement retailer has been attempting to reposition itself to a wider audience as a seller of “health, wellness and performance products.” As the performance market has moved online and to other sources, GNC has been attempting to capture more women and appeal to the Boomers and their set of nutritional needs, which are far different than the iron clangers in the free weight section of the gym.

To say this stock price chart looks like a one-way roller coaster that only goes down would be an understatement. A better comparison would be an alpine slide that starts extremely high up a mountain, has several twists and turns, but only goes in one direction – down. Since peaking in late 2013 near $60, that’s exactly what we’ve seen with GNC shares as its profits turned to losses despite a comparatively modest dip in revenue over the last few years. 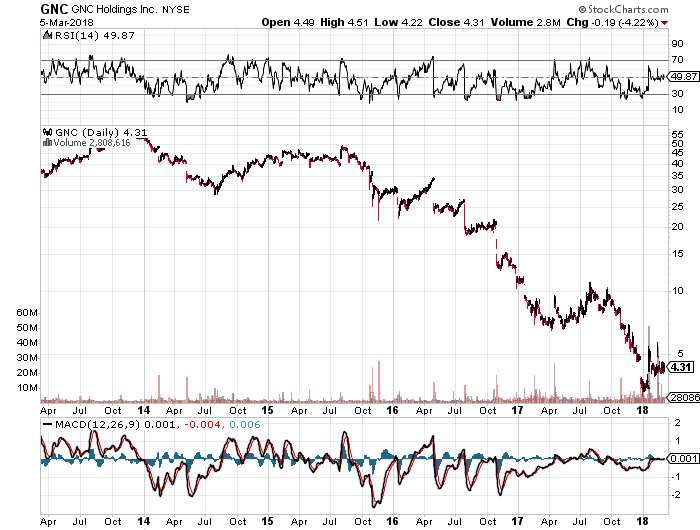 In perusing the company’s latest 10K filing, the company offers up an explanation of sorts: “Prior to 2017, we had been experiencing declining traffic trends leading to decreasing same-store sales in our retail stores. After extensive consumer research and market analysis, we determined that our business model needed to be reimagined.”

Not exactly what a shareholder, existing or prospective one, wants to hear, but at least we can credit the management for not acting like an ostrich with their head in the ground as Amazon rolled into space as did others. The combination of having to “reimagine” its business model as well as fend of competitors led annual Selling, General & Administrative expenses to rise over 2015-2017 as revenue shrank, pushing GNC to deliver bottom-line losses.

Digging into the financials, the company experienced negative same-store sales in every quarter during 2016 and the first two of 2017. Making matters worse, average transaction amount was in negative territory over the last five quarters, and sales at GNC.com sales were falling as well. December 2017 quarterly sales were up 0.2% in company-owned stores vs. down 1.2% in the September 2017 quarter.

Not exactly a recipe for success, but clear signs the company could be in turnaround mode. What makes this potential turnaround interesting is the new partnership with CITIC Capital and Harbin Pharmaceutical Group. As a way of background, CITIC Capital is a global investment firm with a strong position in China and the Harbin Pharmaceutical Group is a joint venture of several China-based pharmaceutical companies. CITIC will invest $300 million in the form of a newly issued convertible perpetual preferred security with a 6.5% coupon payable in cash or in kind and a $5.35 conversion price. GNC will use the funds to repay existing debt and for other general corporate purposes, and on an as-converted basis, CITIC will hold roughly 40% of GNC’s outstanding equity. That’s a significant shareholder and one that will also appoint a total of five members to GNC’s newly expanded 11 member board.

The company expects the transaction to close in the second half of 2018, but it will require regulatory approval in both the U.S. and China. Given the current geopolitical tensions we are reading about almost daily, there could be some speed bumps associated with these approvals. Also too, GNC is ramping marketing associated with its recently launched pricing strategy and loyalty program, One New GNC strategy in the current quarter. This likely means margin pressure is poised to continue.

The bottom line is even though GNC is facing steep competitive domestic pressures, it’s new relationships could pivot its business but there are several hurdles to be overcome. Keyword being “could.” The risk related question I find myself asking is “Yes, I understand what the management team is saying, but what if the pivot or turnaround doesn’t happen as expected?”

We’ve seen many a company that in the face of thematic headwinds and mounting competitive pressures have attempted to reposition their businesses. Few have succeeded. My gut tells me that GNC, much like Blue Apron, Blackberry (BBRY), Angie’s List, GoPro (GPRO), Fitbit (FIT) and others, is on the road to nowhere for investors. But that’s my gut, which means reminding myself to keep an open mind and watch the data as it becomes available.