During the last few weeks, the stock market, as measured by the S&P 500, has undergone a powerful rally. As of last night, that market had climbed 8.6% from its Feb. 11 close. While we are enjoying the market’s move higher, the economic data has continued to point to a slower domestic and global economy. Examples include the following:

Taking all those data points together, along with those from January, tells us that the velocity of the global manufacturing economy slowed further in February. Quarter to date, the global economy appears to be hitting another speed bump. My concern is the increased probability of a repeat of what happened coming into 2016 — slow or weakening economic data, currency headwinds and cuts to earnings expectations.

Turning back to the stock market… the recent and welcome market rally has pushed the NYSE McClellan Oscillator (an indicator of market breadth based on the number of advancing and declining issues on the NYSE) even higher than last week and back to levels from which we’ve seen the market correct significantly. 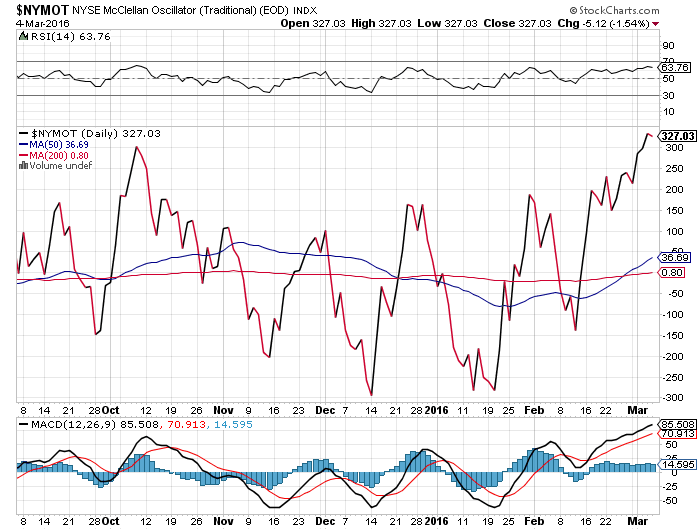 In addition, as of last night, the S&P Capital IQ Short-Range Oscillator shows the market is now significantly overbought — two times overbought to be precise.

What this tells me is we once again are back in cautious territory and that means that not only are the ProShares Short S&P 500 ETF ([stock_quote symbol=”SH”]) shares a buy at current levels, but we need to be cautious when adding new positions in the short-term as well. Our current thematically driven and dividend-heavy portfolio has served us well in 2016, allowing us to easily outperform the market indices.

Given the increasing probability that growth and earnings expectations will need to be revised lower yet again, amid the current overbought nature of the market, my plan is to keep these more defensive positions in Aging of the Population play Physicians Realty Trust ([stock_quote symbol=”DOC”]), Connected Society play AT&T ([stock_quote symbol=”T”]), Guilty Pleasure investment Philip Morris International ([stock_quote symbol=”PM”]) and Content is King holding Regal Entertainment Group ([stock_quote symbol=”RGC”]) intact. Even American Capital Agency Corp. ([stock_quote symbol=”AGNC”]), with its monthly dividend stream and annual dividend yield at better than 13%, warrants holding as things are poised to once again get a little bumpy.

Here’s the thing — we’ll once again have a chance to buy thematically well-positioned companies at better prices and more compelling risk-to-reward trade-offs. Let’s not jump the gun, but rather be patient and prudent. As an experienced carpenter would say, “measure twice and cut once.”

The best performer over the last week has easily been PayPal ([stock_quote symbol=”PYPL”]) shares, which rose more than 5% to $38.80. That has our PYPL shares up 16.6% since mid-September vs. less than 1.7% for the S&P 500. Fueling the recent move in PYPL shares was a rumored tie-up between PayPal and charge and credit card company American Express ([stock_quote symbol=”AXP”]). However, Wall Street was very quick to shoot that rumor down. With takeout speculation abating and concerns over the direction of the market near-term, my thought is it’s better to take profits and look to buy PYPL shares back at better prices. Long-term, I continue to like the company’s position as a standalone play for our Cashless Consumption investing theme. Therefore, we are updating our rating on  Paypal to “Sell” at this time.