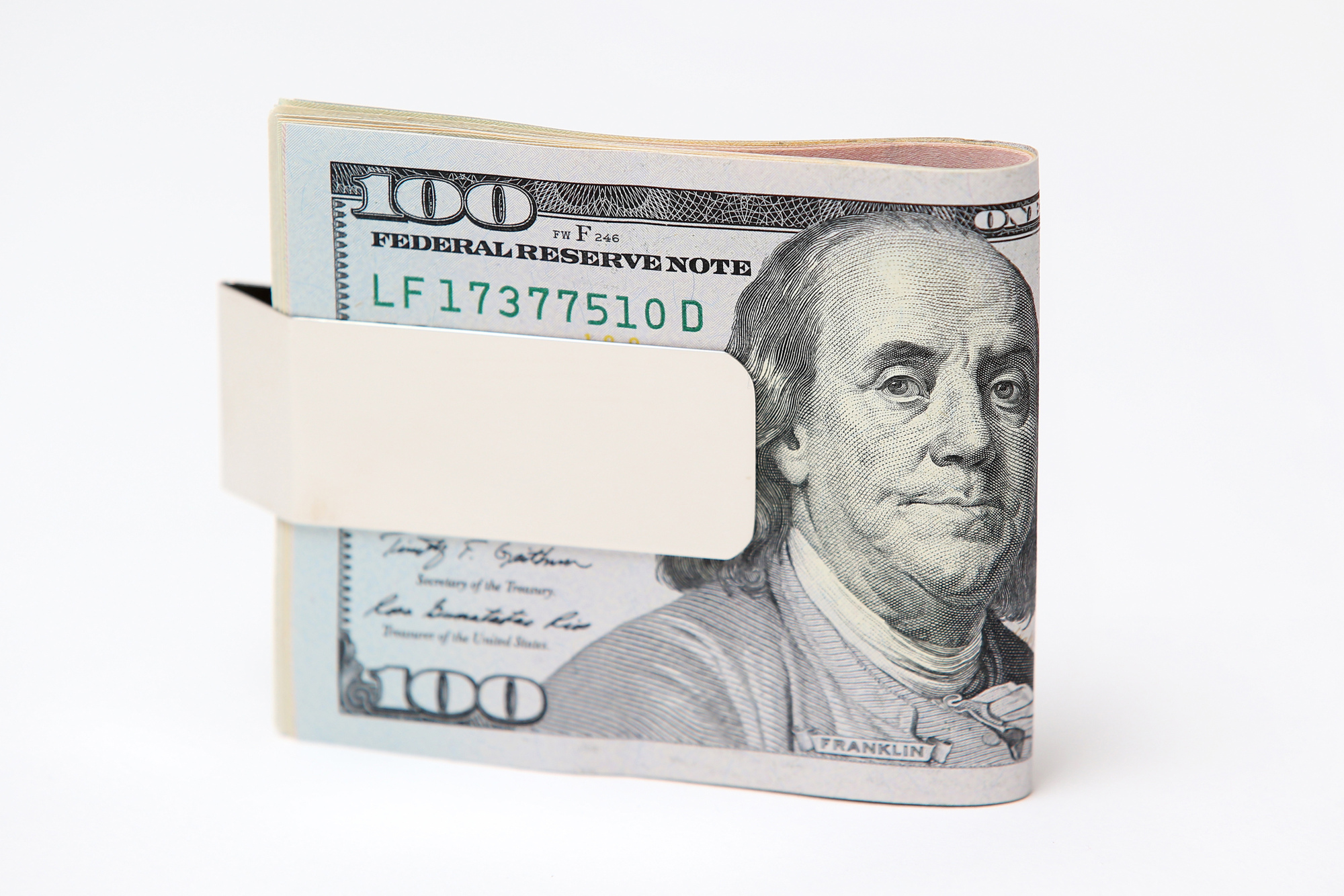 If forward guidance is any indicator, the third quarter earnings season, (How can it be the third quarter already!?) will deliver solid results. So far 54 companies in the S&P 500 have issued positive revenue guidance, which is more than double the 5-year average of 25, while 43 companies have issued positive EPS guidance, also well above the 5-year average of 27.  If the actual number with positive revenue guidance remains 54 or more, it will be the highest number since FactSet began tracking revenue guidance in 2006. The current record level is 45 from Q1 of 2011. The last time we saw this level of positive EPS guidance was in the fourth quarter of 2010. 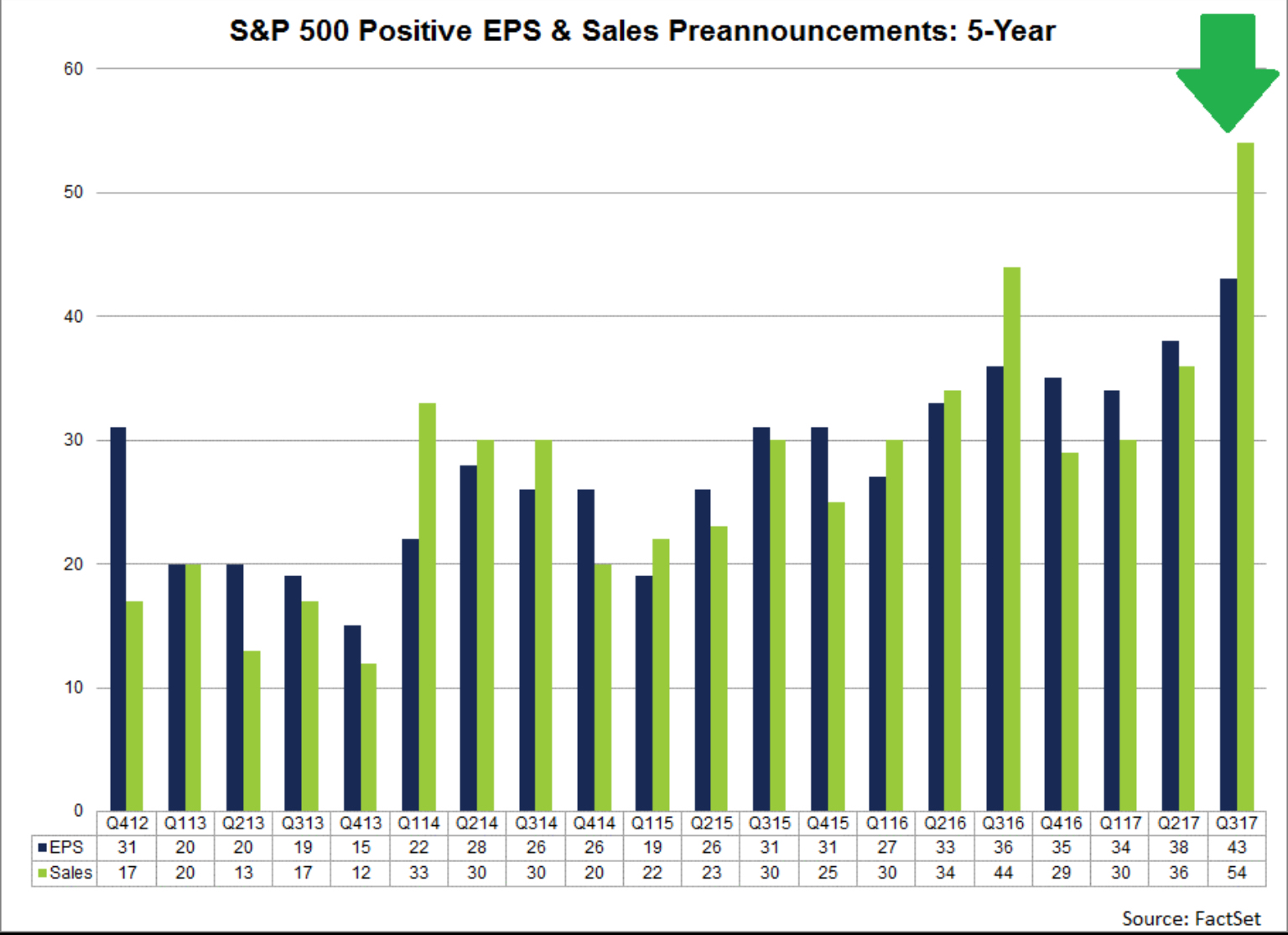 What is driving such enthusiasm? The optimism looks to driving mostly from revenue improvements, as opposed to cost-cutting measures, as 72% of those issuing positive EPS guidance has also issued positive revenue guidance. For those who regularly read our work, we don’t exactly see an economy that is booming, so this unusually high level of revenue beats driving EPS beats is worth investigating. At the sector level, we can gain some insight. Here we find that 70% of the positive guidance on Sales are coming from the Information Technology sector at nearly 2x the normal level, (18 versus 9.5). Another 26% comes from the Consumer Discretionary sector, with 11 companies issuing positive sales guidance versus the 5-year average of 3.9. Health Care accounts for 19% with 8 companies versus the 5-year average of 3.9. Given that the tech sector relies quite heavily on international sales, this looks to be meaningful.

How do companies explain the improvement in sales revenue? (Hat tip to FactSet for accumulating these comments)

From an FX perspective, that’s a little bit of a different story. We had about $0.16 benefit from FX this quarter. And when we look at Q4, we have about a $0.12 FX benefit. So, some nice benefit coming from currency in Q3 and Q4.” –Cooper Companies (August 31)

Moving to our second quarter outlook, which also does not include the impact of the divestiture. We expect revenue to be up 25% to 28% in constant currency which at guided rates, including favorability from foreign currency, translates to $1.260 billion to $1.290 billion. –Symantec (August 2)

The increase in our guidance is due to our confidence in the performance of our business in terms of volumes, especially in China. As Corning mentioned, we had a very good performance in Asia, better than we expected, and that is why we are – that’s the principal reason we are increasing our guidance. –Air Products & Chemicals (August 1)

And I think in general, even the performance in China, Tim has mentioned it. We think that the performance will continue to improve. So those are the drivers of our guidance range for the quarter. –Apple (August 1)

While we love to see companies beat on revenue and EPS expectations, we like those beats to come from truly improving sales, not changes in exchange rates. The dollar weakness has truly been profound since the election, with the USD Dollar Index (DXY) remaining below its 50-day moving average for 118 trading days, the fifth-longest such streak ever. On September 25th, the dollar finally broke above its 50-day for the first time since April 12th and is at the highest level since late August. The last time we saw such a streak was back in 2009 when it went 162 trading days below its 50-day as the massive flight-to-safety trade into U.S. dollars unwound as the Fed began forecasting its quantitative easing plans.

The dollar has recently been showing signs of strength, rising nearly 2% from its recent September lows, which means that we need to take upward pressure on the dollar into consideration when assessing the meaning of this quarter’s results. We would also point out that while the dollar had fallen nearly 11% when looking at the DXY index as of early September, inflation declined from 1.9% year-over-year in October 2016 to 1.4% in July – not at all what one would reasonably expect with a falling dollar an improving economy.

If the dollar has resumed its uptrend, companies whose revenue is primarily domestic will likely outperform those that generate most of their revenue overseas, which is a reversal of the trend we are seeing with respect to forward guidance for the third quarter. Yesterday’s sell-off in the tech sector may be reflecting the potentially rising dollar. While the S&P 500 tech sector year-to-date through the end of August had gained over 25%, outperforming the S&P 500 by 15%, it has been one of the weakest performer in September, falling 1.8%.