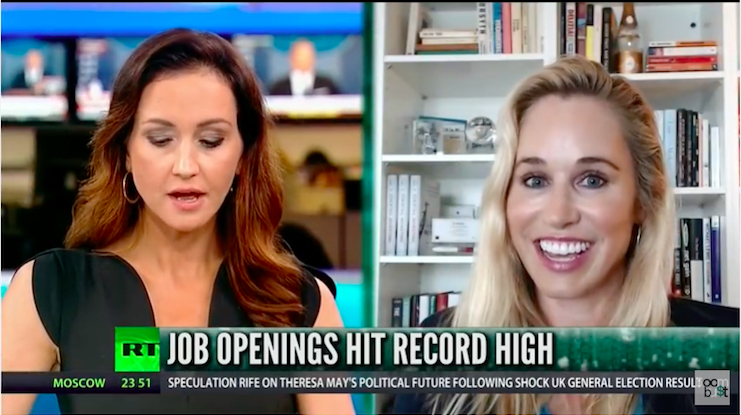 Earlier this week I spoke with Lindsay France on Boom Bust about the reality of the employment situation in the United States. We keep hearing talk out of DC about how this policy or that is going to ignite the economy, and while we would dearly love to see that happen, we rarely hear anything that addresses the only two factors that truly affect the growth rate of the economy: The growth rate for an economy is the sum of the growth of the labor pool and productivity.

Yet, we continue to hear from those in D.C. and the mainstream financial media that the economy is going strong and starting to accelerate to the upside. Errr what? The jobs data tells a very different story. Earlier this month the Bureau of Labor Statistics nonfarm payrolls report for May showed that only 138,000 jobs were added during May, well below expectations for 182,000 and we saw 66,000 removed from the March and April new jobs. Looking at the trend:

That is not a story of an improving economy.

The recent JOLTS (Job Openings and Labor Turnover Survey) report from the Bureau of Labor Statistics reveals a continuation of a concerning trend that we’ve been watching for quite a few years. The number of job openings hit yet another record high at over 6 million, while hirings continue to lag.  The spread between openings and new hires has also reached a new record high. Even more concerning, the number of new hires has fallen in two out of the past three months, as companies struggle find the right match for their needs. This reduces productivity because when positions remain empty, everyone needs to work around the void, impacting their ability to take care of their own workload, so here we have a hit to both the labor pool and productivity.

From the post-recession lows, the economy has added about 14 million jobs, yet we’ve seen no real wage pressures. This is partly because we have 23 million Americans, (more than the entire population of NY) in the prime working age that are not engaged in the labor pool, which is 25% above the historical average level – that’s some serious deadweight on the economy.