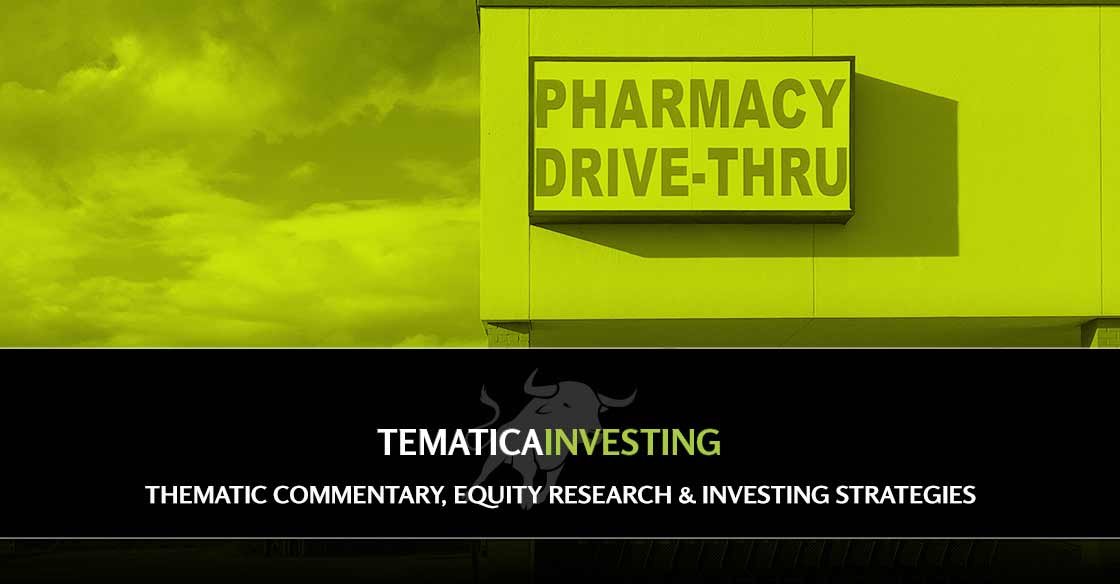 There are several facets to our Aging of the Population investment theme, ranging from the obvious — assisted living, pharmaceuticals, financial services and vitamins and supplements — to the not so obvious such as online shopping, disruptive technology and artificial intelligence which can help maintain independence as the physical realities of an aging body take hold.

We as a people are also living longer, and statistics tabulated by Milliman show an encouraging pattern of increased life expectancy which will trigger increased consumption patterns in the population for medical services and pharmaceuticals. This should be a positive tailwind to pharmacy companies, such as CVS Health (CVS), Walgreen Boots (WBA) and Rite Aid (RAD) that are also pivoting their businesses toward health and wellness offerings. This tailwind also bodes well for the pharmacy businesses at Tematica Select List holding Costco Wholesale (COST) and other companies, like Kroger (KR) and other grocery chains, that have pharmacies.

Looking back over 2017, it was a painful year for Rite Aid, as its shares fell around 75%. Part of that reflects regulators blocking the acquisition of Rite Aid by Walgreens Boots Alliance for some $9.4 billion. After attempts to structure a deal that would placate regulators, this past September the two companies announced that Rite Aid would instead sell off more than 1,900 stores and three distribution centers to Walgreens for $4.375 billion in cash. Rite Aid is in the process of transferring those stores and facilities over to Walgreens, a process that’s expected to span through most of 2018. In exchange, Rite Aid will be receiving an influx of cash, which it has earmarked to primarily reduce the outstanding debt on its balance sheet. That debt reduction should drive a favorable decline in interest expense, enabling the company to drop more to its bottom line in the coming quarters.

Current Wall Street expectations call for Rite Aid to post losses of $0.06 per share in 2018 and $0.03 per share in 2019. Those consensus figures are tallied from six active analysts following Rite Aid and their consensus price target is $2.07, with a consensus view of “Hold.”

As I mentioned above, we here at Tematica see the aging of the U.S. population unfolding as more baby boomers pass 70 years of age, making it a multi-year tailwind to the pharmacy business, particularly as people are living longer. That’s not to say it will be easy peasy for Rite Aid considering the pharmacy businesses at CVS Health, Walgreens, Walmart (WMT), Kroger (KR), Costco Wholesale and others. Note, we haven’t even mentioned the rumblings of bricks and mortar crusher Amazon’s (AMZN) potential entry into the category.

I’m not going to sugar coat it, folks. What all of this tells me is Rite Aid is a turnaround story, and expectations are low, which also makes it a “show-me story.”

The hope/opportunity is that the Rite Aid management team is able to transform the company quicker than expected by leveraging the 20.7 million customers in its loyalty program, improving its offerings and shrinking its operating costs as it looks to offset reimbursement pressure. Management has already identified some $96 million in administrative cost savings, and I suspect there could be more savings to be had in the coming quarters as Rite Aid continues to right size itself.

I also see the company’s predominantly domestic footprint making it a solid beneficiary in terms of tax reform. As I shared in yesterday’s weekly issue of Tematica Investing, tax reform related EPS benefits are arguably all over the map, but Rite Aid should see some lift to its 2018 EPS forecast – the question is how much? More than likely this combination will lead to better-than-expected EPS performance over the coming quarters, and with the current low expectations that would likely move RAD shares, especially if its analyst following became either more bullish or less bearish on the company.

The question is one of magnitude in terms of tax reform benefits vs. expectations, and for that reason, I’m inclined to hold off on adding RAD shares to the Select List until we have some clarity on this key issue, especially since Rite Aid has been received income tax benefits in recent quarters. With the company’s next earnings report likely to occur in early April, we can look at results from CVS Health and Walgreens to get a handle on the potential tax reform impact to be had at Rite Aid. CVS shared that as a result of tax reform it sees its effective tax rate to run near 27% this year, which should increase its cash flow by roughly $1.2 billion, but Walgreen’s recent guidance did not factor in any impact from tax legislation.

Not very helpful, and rather than jump the gun on this, I’ll continue to assess the potential benefit on Rite Aid’s business and what it could mean for its shares. Until that clarity arrives, I’m adding Rite Aid shares to the Tematica Contender List as part of our Aging of the Population investment theme.