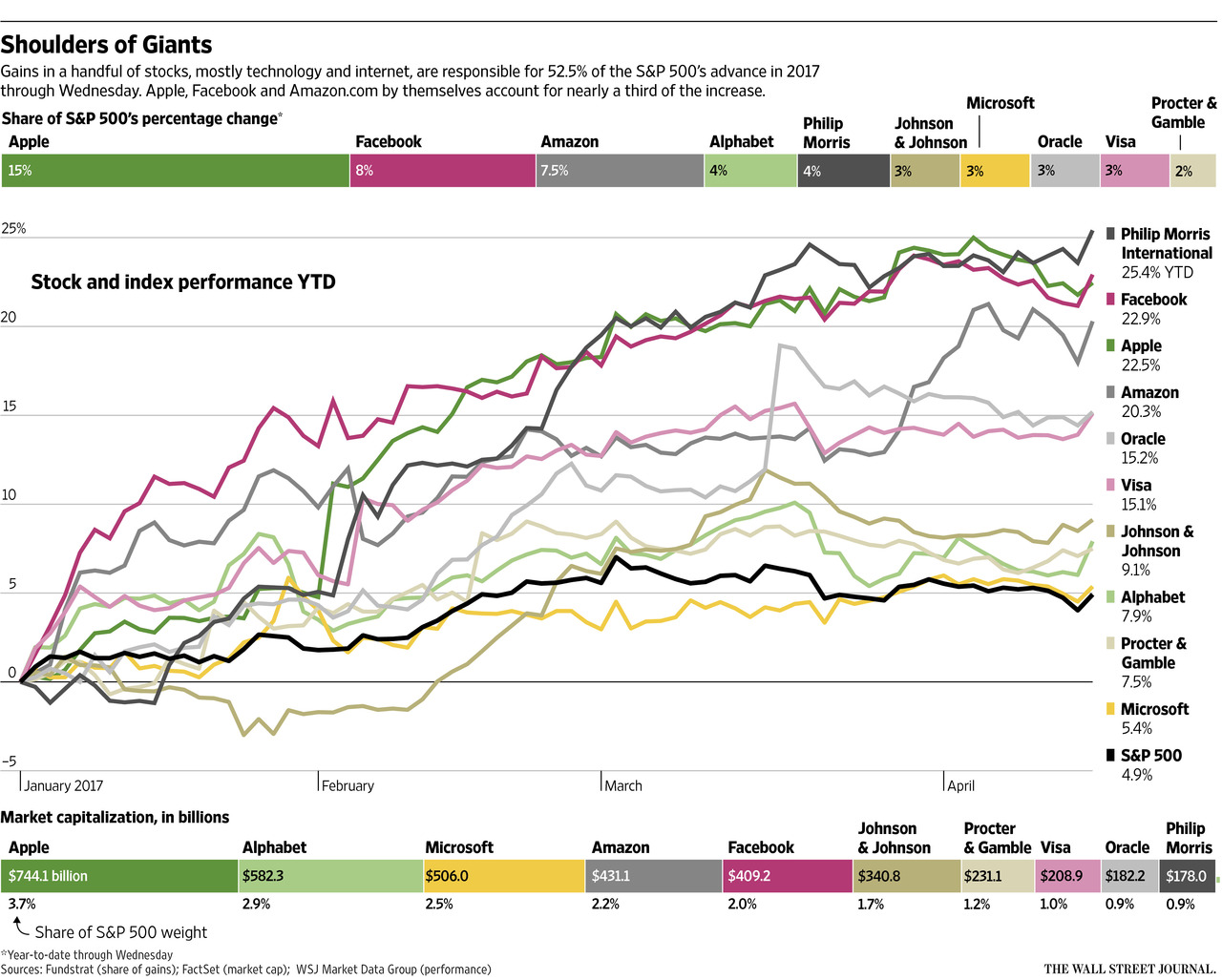 We are seeing the beginnings of de-risking as for the first time since the election as the S&P 500 has broken below its 50-day trendline, but is still just 3 percent shy of its all-time high, so let’s not get overly carried away here. Volatility, in the form of the CBOE’s volatility index (VIX), rose every day last week and has jumped 24 percent to be at its highest level since November. Meanwhile, those talking heads on mainstream financial media keep focusing on the same thing the herd does – which rarely results in successful investing.

Ten big stocks are exerting an unusually large influence on the S&P 500 in 2017, the latest sign that the herd instinct is alive and well on Wall Street. Those 10 large stocks have powered nearly 53% of the S&P 500’s 4.7% advance this year, according to Fundstrat Global Advisors’ data through the middle of last week. During an average year, the 10 stocks with the greatest impact typically account for only 45% of the market’s price moves, according to analysis of data from AQR Capital Management.

Looking at what has happened with core CPI and PPI rolling over as well as current GDP estimates for Q1, we think it is quite likely that non-financial corporate profits may have contracted in Q1 on a quarter-over-quarter basis while rising on a year-over-year basis thanks to the weakness in Q1 2016. Those CPI and PPI numbers tell us that corporate pricing power just isn’t there, a reality that does not support the narrative of “animal spirits” igniting post-election. Nor is the reality of declining productivity in the face of rising unit labor costs, which serve to squeeze margins.

As for that accelerating economy narrative, it is wholly inconsistent with the data coming out of bank earnings reports with commercial loan balances at J.P. Morgan Chase (JPM) and Wells Fargo (WFC) unchanged over Q1 while new auto loans fell 17 percent at JPM and 29 percent at Wells on a year-over-year basis. Citigroup’s (C) profit from consumer banking in North America dropped 25 percent thanks to credit losses on some credit cards while JPM and WFM consumer banking profits dropped 20 percent and 9 percent, respectively.

Treasury bonds benefited from Trump’s talk last week on preferring low-interest rates, despite his criticism of Fed Chair Yellen during his campaign, with the 10-year Treasury falling to levels last seen in November. We suspect there is more room for rates to fall here as all those sentiment surveys sync up with the much weaker hard data.

Rates aren’t just falling here though as the 10-year Japanese sovereign bond yield is now below zero again for the first time since November, with the German 10-year falling below 0.2 percent. With all the talk about the U.S. needing a weaker dollar, gold is moving up, well on its way to cracking $1,300.

The risk-off move is likely driven in large part by the geopolitical tensions ranging from the recent MOAB drop in Afghanistan to North Korea getting cranky again to the upcoming elections in France where a Marie Le Pen victory has become more of a possibility. If however, Macron wins in the second round, we wouldn’t be surprised to see a bit of a rally in those battered French bank stocks.

As the first 100 days of the Trump administration nears its end, we’ve gone from campaign of isolationism to a more aggressive military; the failed healthcare reform plan is returning to center stage while tax reform, deregulation, and infrastructure spending are pushed further back. Those who follow our analysis ought to be unsurprised that the Trump Trade is fading fast.