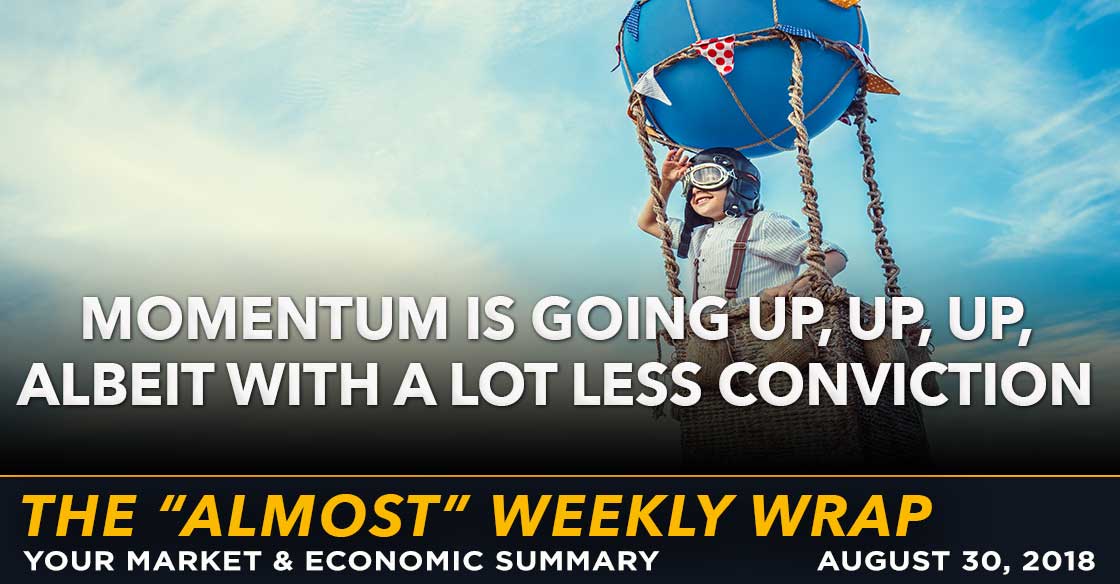 Due to travel logistics this week, we’re giving you a quick recap at the midweek before heading into the last hurrah of summer and the Labor Day holiday weekend in the United States.

You’ve heard this one before right? Equity markets making new highs while volatility continues to be exceedingly low. Here are a few thoughts as we exit the summer and head into the final months of the year.

Narrowing breadth, profit levels elevated relative to historical norms and future growth expectations highly optimistic – the risk that the market will be disappointed in the coming months looks pretty high to me.

The economic data continues to be a mixed bag, but more data is coming in weaker than expected than is coming in better than forecast. The Economic Research Institute’s Leading Economic Index has declined in 5 of the past 6 weeks and is not at its lowest point for the year. Market reaching new highs while the LEI hits a 2018 low – the markets and the economy often don’t accurately reflect one another.

One of the biggest geopolitical risks continues to be these ongoing trade wars. This week looks to have made progress with Mexico and maybe Canada, but, and for the life of me I don’t know why this isn’t discussed more, Congress still has to vote on these agreements and I wouldn’t exactly describe the relationships on Capitol Hill as warm and fuzzy. We’ve also got mid-term elections coming up with a decent probability that the Democrats are going to gain ground, which means inside the beltway would be even more cantankerous.

As for those trade wars and revised terms with Mexico and Canada, they pretty much translate into higher prices for consumers. So, the big question is with consumer spending accounting for around 70% of GDP, will any gains in wages (which has so far been rather elusive) be sufficient to make up for rising prices thanks to new terms of trade and the overall rising costs we’ve been hearing about?

Then there is Italy. No one seems to be paying much attention to the fact that the third largest economy is Europe is having a political meltdown. I’d like to point out that more people died in Rome this year from accidents largely due to the utterly horrendous roads than died in the bridge collapse in Genoa. On a side note, I’ll be back in Genoa next week. I get a massive lump in my throat when I think what it will be like to drive past the collapsed bridge. Italy’s political leadership has been giving social media more mockery material than I would have ever dreamed, or perhaps that’s more of a nightmare. This situation is going to get much, much uglier and then there is that Brexit mess. But markets are making new highs so, it’s all good.

It’s all about momentum and the momentum is going up, up, up, albeit with a lot less conviction than I’d like to see. The economic and geopolitical picture when one looks out beyond the next six months makes me want to distract myself by uncorking a nice Barolo. That said, Labor Day weekend is upon us so go enjoy the sun, your friends, your family, and think of all for which you can be grateful. Eat a bit too much. Laugh a bit too much. Life is sweet and all too short. Enjoy.

During next week’s four trading days, we’ll be looking for the ISM Manufacturing and non-Manufacturing Indices and motor vehicle sales as well as the productivity numbers for Q2 and July Factory Orders. We’ll also get August’s payroll reports and average hourly earnings.