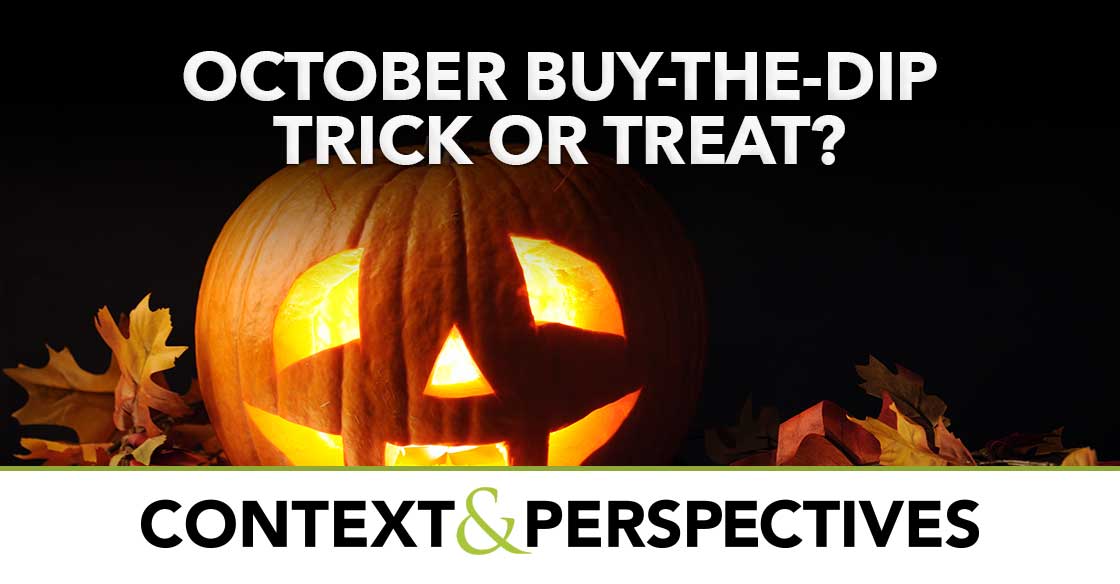 So much for the typical October strength in equities – a month in which the major US indices historically have gained ground 75% of the time. We’ve seen major index support levels broken while earnings beats have been smaller than we’ve seen over the past year with revenue and forward guidance giving investors jitters.

Over the summer and through September we warned that this earnings season would likely be a very bumpy ride as earnings would probably be decent, but guidance would not support the market’s multiples. Our concerns have proven warranted. Overall this earnings season the average company that has reported saw its shares fall 2% on its earnings reaction day – if this keeps up it will be the worst stock performance reaction on record since 2001.

How bad has it been?

Investors are taking note with the weekly sentiment survey from AAII reporting that bullish sentiment fell to 27.9% from 34%, the fourth weakest reading for bullish sentiment this year. Bearish sentiment rose from 35% to 41%, the highest reading since the last week of June. Other indicators, such as the CNN Fear & Greed Index which fell to Extreme Fear (6) this week from Greed (64) a month ago, also point to increasing investor unease.

What is driving all this is the market starting to sync up with the reality of geopolitics and economics.

The big question is where do we go from here?

Just 13% of stocks in the S&P 500 are above their 200-day moving average – these are mostly in the aforementioned Consumer Staples and Utilities sectors. This level has only occurred a few times in the past, marking just how oversold near-term the market has become. There is not one Energy or Industrial sector stock above its 50-day moving average. Rebounds are to be expected with such near-term oversold conditions.

Looking at the economics, the Citigroup Global Economic Surprise Index has been in negative territory, (meaning more data coming in below expectations than above) since April – the longest stretch in 4 years. The October Eurozone PMI fell to a 25-month low. Back in the US, the Richmond Federal Reserve local business conditions index for services hit a 7-year low, similar to what we’ve seen on the manufacturing side.

The employment situation is increasingly worrisome. The Richmond Fed’s wage expectations index for 6 months out recently jumped dramatically up to a level not seen since March 2000 as the available pool of labor has dropped to an 11-year low. Looking at who has been getting jobs recently, 70% of job gains over the past 6 months and 100% over the past 4 months have gone to folks with just a high-school degree or less. While we love to see more people getting jobs, from the corporate side of things, that means that companies are having to hire those with the weakest skill set. Great for the person getting a job as they can now develop more skills, but brutal for the employer who is facing weaker productivity as a result – that hurts earnings which are already facing rising costs from tariffs and trade wars as well as rising interest rates.

The bottom line is we are likely to see some interim rebounds, but it doesn’t look like the market is yet in sync with global realities. We have been pointing out for months that US stocks indices have been outperforming the rest of the world to a degree that was simply not sustainable.

The market is starting to appreciate the magnitude of the fiscal stimulus economic sugar high, that trade wars aren’t so easily won, that geopolitical risks are material, that the change in central bank liquidity flows matters and that future earnings growth is likely slower. We haven’t even gotten started when it comes to the fireworks I’m expecting from the Italian situation. We are likely to see the occasional rebound, but my money is that more pain is yet to come. That is great news for those that are focused on solid, long-term investing themes like the ones we have developed at Tematica Research, and have a shopping list of stocks ready for the bargains that will be coming our way.