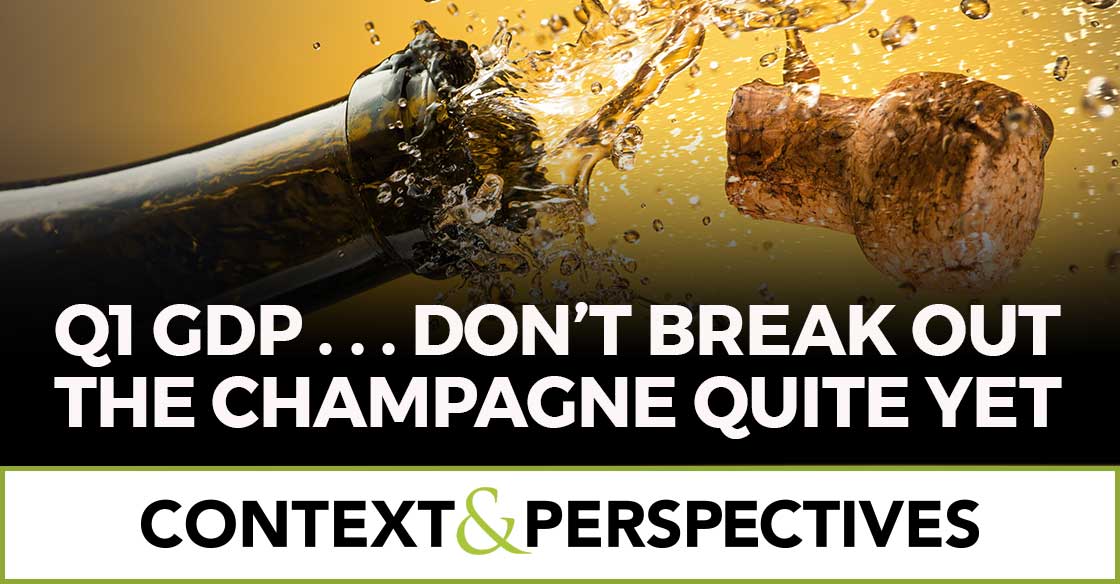 This morning we received the first estimate for Q1 2019 GDP, and it looked at first glance to be considerably better than was expected with the economy expanding at a 3.2% annual pace versus consensus expectations for 2.3% and growth of 2.2% in Q4 2018. Just don’t break out the champagne quite yet as right away we see reasons to dig deeper.

Net exports plus a build-up in inventories contributed 1.68% to GDP. That’s the biggest bump in 6 years and muddies the economic waters. We’ve now had three consecutive quarters of buildup in nonfarm inventories, likely in defense against further tariff increases. That buildup is a pull forward of growth from the future. The 103-basis point contribution from net exports in the face of ongoing cuts to global growth makes this unlikely to continue. The 46% annualized increase in food exports looks to be more about trade wars than sustainable improvements in trade. Despite the government shutdown, government spending, (primarily at the state and local level) contributed 41 basis points, driven primarily by 35 basis points at the state and local level in “Gross investment.” Given the condition of most government budgets, this isn’t sustainable.

Digging further into the details we find areas of weakness that are more in line with the weaker expectations:

On the plus side, durable goods orders grew at the fastest pace in 7 months with a sign that business investment is rebounding. Perhaps on the hope that those China trade talks might actually get somewhere beyond hopeful sound bites that something wonderful is right around the corner? The bigger picture year-over-year factory orders data is less rosy, painting a picture of more slowing. Keep in mind that orders can be cancelled. Shipments for capital goods on a year-over-year basis is solid, but has been consistently slowing.

For a different view on the economy, we can look at how 3M (MMM) and Intel (INTC) have fared, both of whom are bellwether cyclicals. Both companies have seen their shares get pummeled recently thanks to their less-than-rosy outlook. Take a look at United Parcel Service (UPS) whose profits are down 17%. What can be more reflective of the economy than deliveries?

So far Q1 earnings are at a -3% year-over-year decline and Q2 forecasts are expected a -0.5% decline. At the start of the year, expectations were for both to be in positive territory. At the same time, the major market indices have managed to break through to new highs with the Nasdaq up 22% and enjoying its best year since 1991 and the S&P 500 up around 17% and enjoying the best performance since 1987. Then again, look at how 1987 ended. The market’s rally so far this year has been all about multiple expansion, rising from 16.5x to 18.7x on a trailing basis. 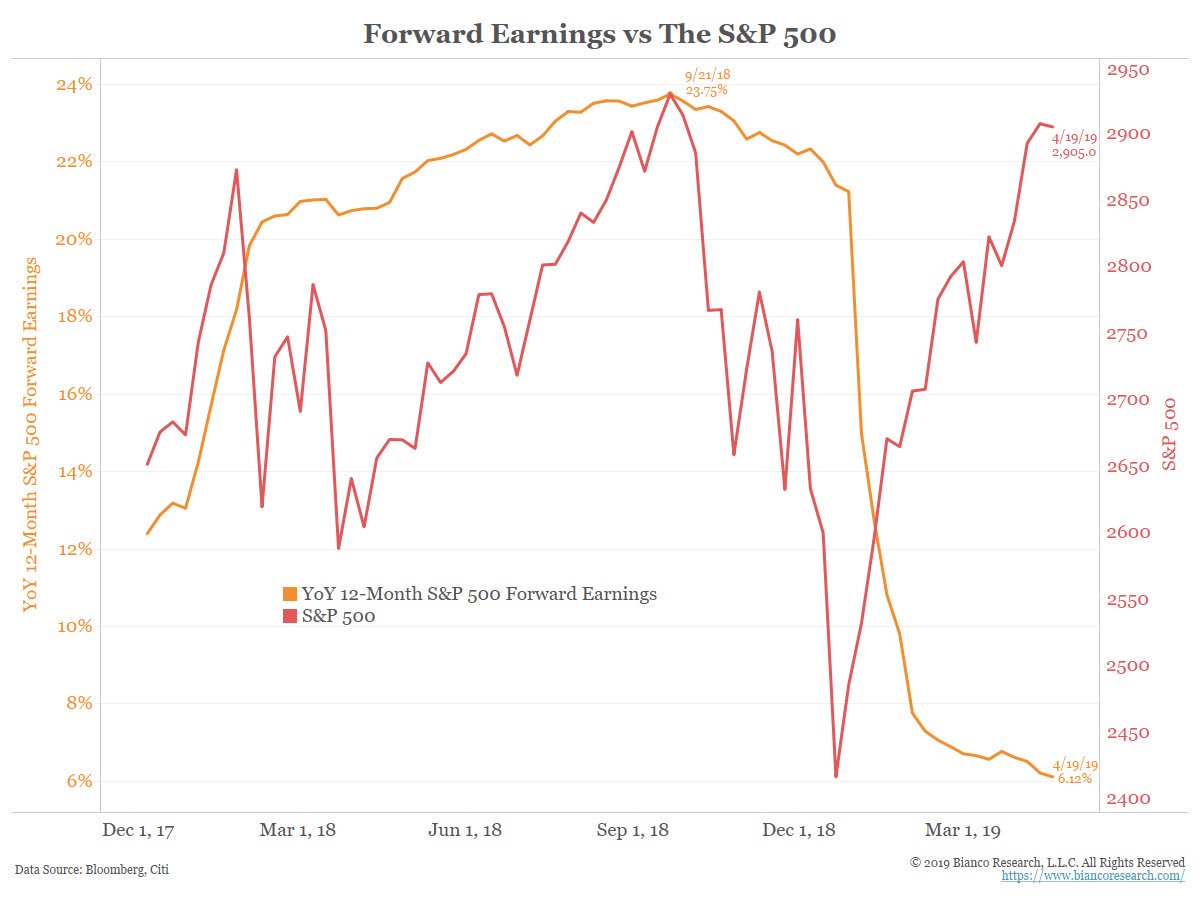 As the Federal Reserve once again indicates that it has the market’s back, the S&P 500 has decided that the economic data just isn’t all that relevant.

Yes, jobless claims are still exceptionally low by historical standards, but we always look for confirming data points and we aren’t finding them.

For a different look on how the consumer is faring, household formation declined in the first quarter – the kids are back to living at home with mom and dad. Mortgage originations at Wells Fargo (WFM), the nation’s fourth largest bank by assets, declined 23% year-over-year in the first quarter and 18% and JP Morgan (JPM), the nation’s largest bank by assets. In fact, revenues at Wells fell across all business lines with profits only coming as a result of cost reductions. Today’s GDP report saw residential construction decline -2.8% on an annual rate, the fifth consecutive quarterly decline.

Let’s keep this simple and just look at growth in the major parts of the private sector on an annual basis – consumer spending, housing, nonresidential construction, business capital spending:

Tell me again how the economy is growing like gangbusters?