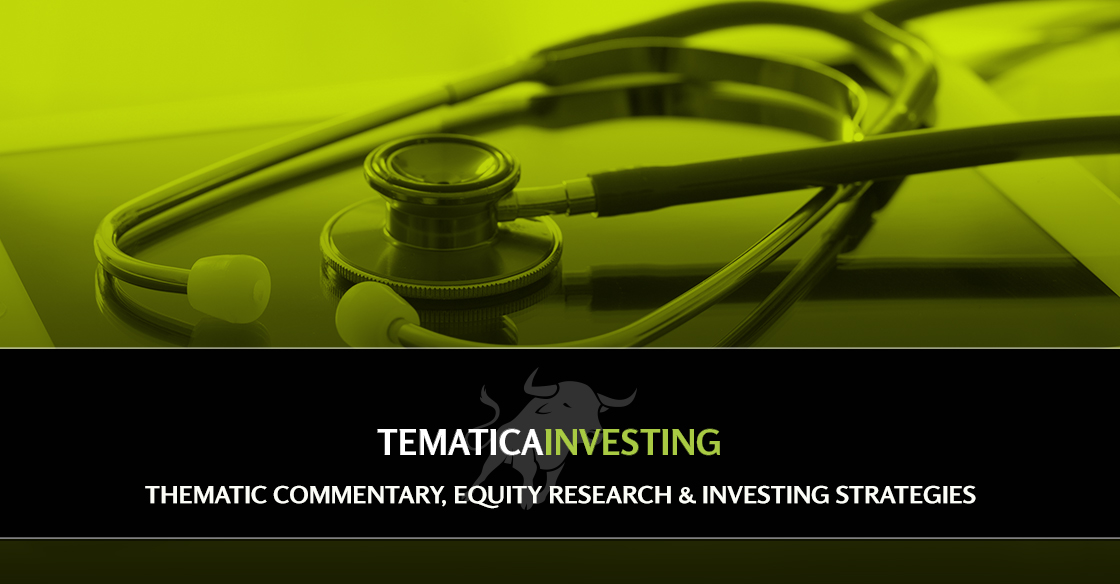 Today we complete the recasting of our 10 investment themes that we’ve undertaken over the last several weeks. That process has led to several new investment positions and today we have a new one as well as we revisit our Aging of the Population investing theme.

Stepping back a few paces, I recognize that we’ve introduced several new positions in as many weeks. Hang tight for a day or two, and I’ll share the logic behind what we’ve been up to, and I suspect you’re going to nod your head as you read it. For now, let’s get to Aging of the Population and that new pick.

There Is Just No Fighting Father Time

As we look around us, it’s rather obvious that people are living longer, which in many respects is a good thing, but those extra years have a significant impact on society. As we age our needs and abilities change, and with that so do the services and products that we consume.

According to a National Center for Health Statistics report released in 2016, the average life expectancy in the U.S. stands at 78.8 years on average, with women outlasting men by a few years 81.2 years of age vs. 76.6 years. By 2030, the Administration on Aging (AOA) estimates there will be about 72.1 million people aged 65 or older, more than twice their number in 2000. In 2010, the baby boom generation was between 46 and 64 years old, and that generation is now beginning to enter their 70s.

Over the next 13 years, all of the baby boomers will have moved into the senior generation, resulting in a major structural shift in demographics. From 2010 to 2030, the percent of the population over 65 will increase from 13 percent to 19 percent while the percent of the U.S. population aged 20-64, the primary working years, will decrease from 60 percent to 55 percent. The broadening of the upper age pyramid is poised to significantly impact demands on healthcare, housing and transportation and question the ongoing viability of social service programs like Medicare, Medicaid and Social Security. Ah, yes more fun times to be had in Washington over the next decade.

Canada, Japan, and most of Europe have an even higher percentage of their populations in the older age brackets. According to population projections from the United Nations published in its 2013 “World Population Ageing” report, the global population aged 65 and older will triple over the next 40 years, from 500 million in 2010 to 1.5 billion by 2050, thus doubling the share of this demographic across the world from 8 percent to 16 percent. There is a shift toward older age brackets in almost every country as people live longer and have fewer children. Digging into the specifics of that UN report one sees that:

How does this stack up against what it used to be?

This living longer is the basis for our Aging of the Population investment theme. It will lead to new products and services that cater to the needs of this increasing “older population ”demographic, but it also means greater demands on savings and investments. Unfortunately, according to a report by the Economic Policy Institute (EPI), the average household aged 56-61 has amassed a retirement nest egg of just $163,000 which equates to an average monthly income of just $681 across a 20-year retirement according to EPI. Worse yet, an estimated 41% of households aged 55-64 have no retirement savings at all and over 20% of married Social Security recipients and 43% of single recipients 65 and over rely on their monthly benefit checks to provide at least 90% of their income.

The big issue facing the nation is the assumption of a 20-year retirement time period when data from the Social Security Administration shows one out of every four 65-year-olds today will live past the age of 90, while one out of 10 will live past 95. It’s no wonder 60% of baby boomers claim they’re more afraid of outliving their savings than actually dying. This is a massive problem across much of the world as rising life expectancies place much greater strains on government managed retirement programs while the percent of the population paying into those programs declines. Payout levels are growing while relative contribution levels are declining.

Who will ride the Aging of the Population tailwind?

The bottom line with this massive worldwide demographic shift towards a more senior population is a reallocation of spending and consumption habits. Money that was once dedicated to supporting a young and growing family will increasingly shift toward spending that serves an aging population. Pronounced spending shifts such as these can have a dramatic impact and in this case, the snowballing of the “older population” likely means an even greater compounding effect will be had.

How big will this overall aging lifestyle-spending shift be?

According to research firm A.T. Kearny, worldwide spending (remember the aging of the population is global) by mature consumers is forecasted to reach $15 trillion annually by 2020. That’s a large opportunity for industries that are meeting the particular needs of consumers age 65 and older and with the aging population only expected to grow further between 2020 and 2030, spending by this cohort will grow substantially in the coming decade-plus. It also likely means that more companies will tailor products and services to meet this opportunity.

There are a number of industries that will likely be beneficiaries. Some are obvious — healthcare, pharmaceuticals and medical technology are what come to mind for most people and certainly receive significant weighting in the Aging of the Population index. Others are less obvious but just as important and likely to feel the same thematic impact. We’re talking about:

One of the key aspects of our Aging of the Population investing theme centers on the aging of the baby-boomer generation and the corresponding needs and pain points. Looking at the domestic population, no matter the data or the source, it all points to the same thing — more people over age 65 than ever before.

Now for the real whammy: According to the National Council on Aging, 80% of older adults have at least one chronic condition, and 68% have at least two. Combined with the underlying demographic shift, this will place far greater demands on the domestic health care system in the coming years.

While many tend to focus on any one of the various aspects of the health care systems, the combination of the aging population and chronic conditions is a demand driver for nurses. But here’s the problem: The U.S. has been dealing with nursing constraints over the last few decades. Viewed against the aging population and an aging nursing workforce with limited capacity at nursing schools, that constraint is looking more and more like an outright shortage.

Where does this leave us?

The nursing shortage that we’ve identified as part of our Aging of the Population theme looks to benefit from both a significant increase in demand but also a scarce-resource tailwind as well. That combined tailwind has been extremely beneficial to the shares of AMN Healthcare Services (AMN), a healthcare workforce and staffing solutions company with an emphasis on the nursing industry. Tematica Investing subscribers should be familiar with the company given the AMN shares resided on the Tematica Investing Select List from August 2016 until May 2017, when we were stopped out of the position.

Staffing Industry Analysts (SIA) estimates that the segments of the target market in which AMN primarily operate have an aggregate 2018 estimated market size of $17 billion, of which travel nurse, per diem nurse, locum tenens and allied healthcare comprise $5.4 billion, $3.7 billion, $3.7 billion and $4.2 billion, respectively. Based on the consensus revenue forecast of $2.15 billion this year for AMN, the company has approximately 12.5% market share across those aggregate markets. And as the population continues ages, those figures will continue to rise, giving the opportunity for AMN to place not only nurses but assist in other physician leadership searches as part of its Managed Service Program offering. Generally speaking, AMN’s revenue and profit stream reflect the number of healthcare professionals it has placed on assignment multiplied by the average bill rate. More than likely as the shortage continues, the company’s average bill rate is poised to move higher making for nice incremental margin gains.

The question to be asked now is if there is sufficient upside in AMN shares to have them rejoin the Select List at current levels?

Looking at the discrepancy in the monthly JOLTS reports between the number of healthcare job openings vs. the number of filled healthcare jobs, we know the healthcare workers shortage pain point remains. Over the 12 months ending June 2018, per the monthly JOLTS report, the ratio of healthcare and social assistance job openings to hires has remained near 1.9x.  The analysis of the nursing shortage over the last few pages also tells us that it’s not going to be solved in one year’s time let alone in the coming few years, which means the sting of that pain point of that shortage will be felt some time to come. This will likely translate into continued top and bottom line growth for AMN as its revenue model capitalizes on that pain point. Should we see an increase in the number of new nurses coming into the market, this will likely augment AMN’s revenue stream as it leverages its market position and places a percentage of those new entrants.

Over the 2012-2020E period, AMN is expected to grow its bottom line at roughly a 17% compound annual growth rate (CAGR). As the nursing shortage pain point has intensified over the last several years, AMN shares have peaked at more than 21x earnings and bottomed out at an average P/E multiple at 14x. Applying these historic multiples implies upside from current levels to $72, with downside risk to $48. With more Baby Boomers turning 70 years old every day, odds are those historic PE multiples, particularly to the downside, will move higher in the coming years as the severity of the nursing and aging pain point is more fully recognized. While we could stretch the P/E multiple to warrant a $75-$85 price target (and downside to just under the current share price), a better way to view it would be to place a discounted P/E placed on expected EPS of $4.00 in 2020, which gives us a $75 price target.

Companies riding the Aging of the Population investing theme