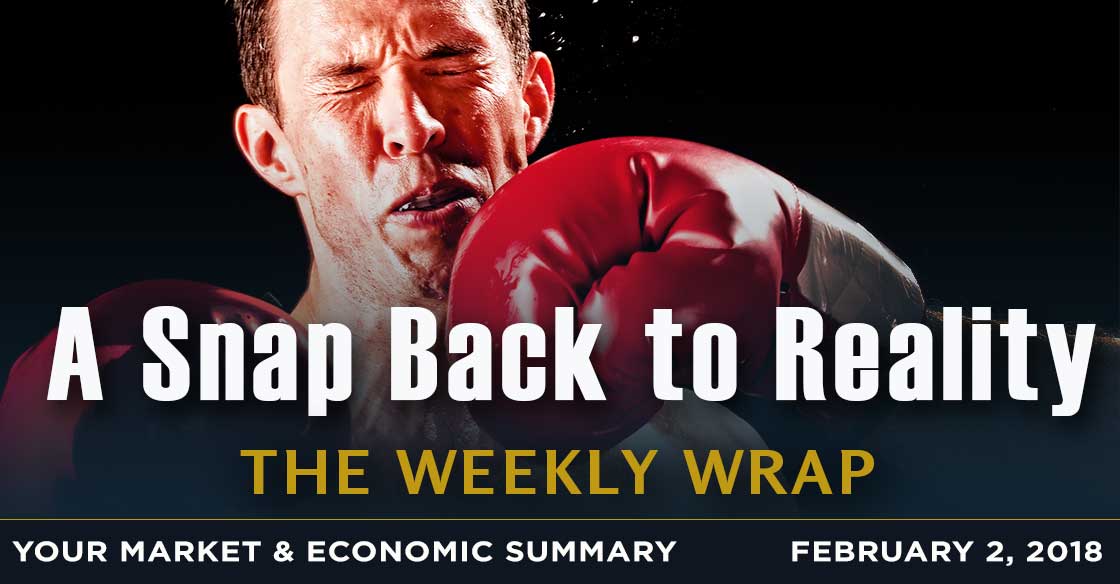 Well, this past week was something different as equities took it on the chin! By Friday morning every major equity index in the U.S. was on track to experience its worst week in two years as the U.S. 10-year Treasury yield moved over 2.8%, hitting the highest level we’ve seen in over four years, while the 30-year broke through 3%. The dollar made new lows during the week, dropping to December 2014 levels. The rout was also seen in the cryptocurrency world as Bitcoin, which had reached over $19,000 in December, dropped below $8,000.

The week started off on a negative tone on Monday as the S&P 500 broke its streak of 99 consecutive trading days without a 0.6% decline. Tuesday the index broke another streak, this one was a whopping 310 trading days without back-to-back declines of 0.5% or more. As of early Friday afternoon, the index was on track to end the 449 calendar day streak without dropping 3% from a closing high.

On the political front, President Trump gave his first State of the Union address and Fed Chairwoman Janet Yellen conducted her final committee meeting as the head of the Fed. The following FOMC statement, which described employment and household spending as “solid” and asserted that “market-based measures of inflation compensation have increased in recent months” combined with former chair Alan Greenspan’s “bubble” comments unnerved markets increasing the possibility for four rate hikes in 2018. With this concern, we’ve seen bond yields rise substantially not just at home, but on a global basis, with the German and Canadian 10-years hitting a multi-year high, while European investment-grand bond spreads have narrowed to the tightest level in over 10 years.

Mid-week, the ADP Employment report hinted that we might see stronger than expected payroll numbers on Friday, with a gain of 245k jobs in January versus expectations for 185k. Friday’s report from the Bureau of Labor Statistics did surprise to the upside, reporting 200k new jobs in January with the unemployment rate unchanged at 4.1%. The unemployment rate has now been below the Fed’s official NAIRU (non-accelerating inflation rate of unemployment aka full employment) for eleven consecutive months. The headline for the BLS reported looked solid, but the details paint a different picture, which you can read about here.

Thursday’s auto sales came in below expectations and were the weakest since August 2017 as the aftermath of 2017’s horrific natural disasters fades, coming in at 17.04 million units on a seasonally adjusted annual rate (SAAR) versus the expected 17.2 million and well below December’s 17.76 million. Ford, Fiat-Chrysler and Hyundai were quite weak, while Toyota, GM, Audi, Mazda and Nissan managed to put up decent numbers. Truck sales, which provide a good read on the overall health of the small business sector, slowed in January, following a blowout December that featured the fifth strongest units since 1996.Now for the perspective, despite that “blowout” December’s figure was an increase of just 1.6% on a year-over-year basis.

Manufacturing saw a slight decline in January, according to the ISM Manufacturing Index report, but came in above expectations at 59.1 versus 58.6 expected and 59.3 in December. Despite the decline, the number was the fifth highest monthly print in the current business cycle.

While many in the markets are today worried the Fed may raise rates more than was previously expected, we’d like to point out a few realities. These may or may not affect the Fed’s decisions, but in our view, they deserve some attention.

On February 1st we learned that nonfarm labor productivity in the fourth quarter actually declined -0.1% on an annual basis versus expectations for an increase of 0.7%. In addition, Q3’s increase of 3% was revised down to 2.7%. Recall that the growth of an economy is a function of the growth in the workforce and the growth in productivity. Today the 12-month moving average for the growth in the labor force is just 0.7%. Putting the two together doesn’t give an exactly robust picture and yes, a picture is indeed worth a thousand words. 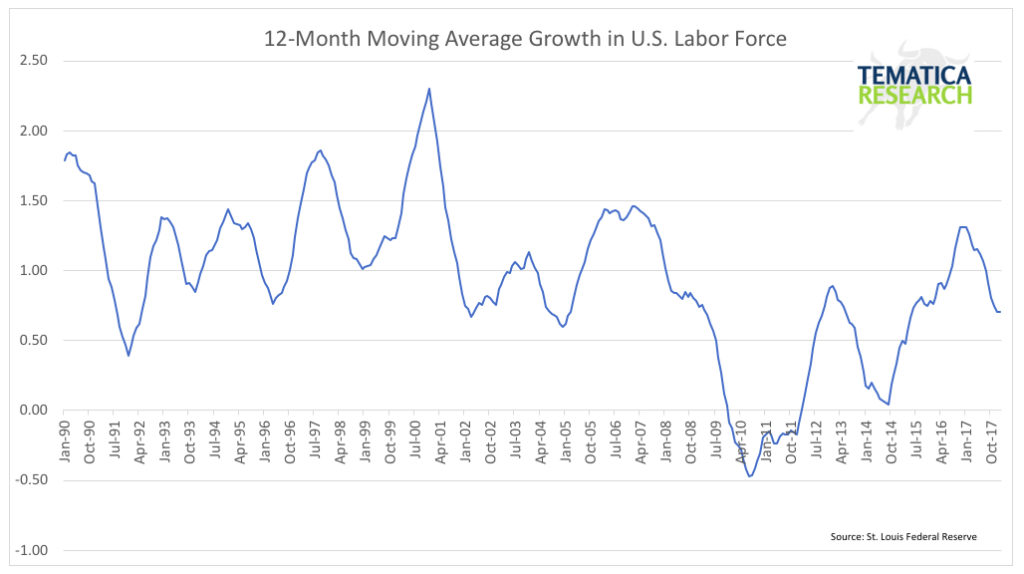 The bottom line this week is richly priced equities are taking a serious punch from rising interest rates, which increase borrowing costs in an economy that is once again heavily indebted across the board. This week the Wall Street Journal reported that government borrowing in the first quarter of 2018 is set to hit the highest level since 2010 when the unemployment rate was 10% versus the 4% we have today. Here’s a quick look at the estimated federal debt issuance:

This ballooning level of borrowing is coming at a time when the Fed is reducing its balance sheet, thus hitting the bond market from both sides – weaker demand and extra supply. Add this to record high corporate debt and ballooning consumer credit card debt and you have yourself one painful debt-fueled headwind. Odds are all of this is going to make the next round of Federal government funding talks even more fiery in D.C.