Today the Washington Post featured a piece that highlights what we at Tematica have been saying for months and is highlighted in our Middle-Class Squeeze investment theme. All is not well in many American households at a time when unemployment is at a 50-year low, there are more job openings than there are job seekers and the powers that be keep telling us how great things are. The Post article noted:

A record 7 million Americans are 90 days or more behind on their auto loan payments, the Federal Reserve Bank of New York reported Tuesday, even more than during the wake of the financial crisis era.

This is particularly concerning given that a car is often more important than even making a mortgage payment or a credit card minimum payment as it is how most people get to work.

A car loan is typically the first payment people make because a vehicle is critical to getting to work and someone can live in a car if all else fails. When car loan delinquencies rise, it’s a sign of significant duress among low-income and working-class Americans.

Given that the population has increased since the Financial Crisis, the actual percent of auto loan borrowers that were 3-months or more behind on their payments is at 4.5% versus the peak of 5.3% in late 2010, but the record high number is concerning at a time when the economy is supposedly firing on all cylinders. What happens when it really does slow?

We are seeing similar worrying signs in the recent Federal Reserve Senior Loan Officer Survey which found that demand for consumer loans is in full-on contraction. This is not something you see when the economy is strong and people are confident about their financial future.

We will be discussing this and much more in our Context and Perspectives piece to be released later this week.

Source: A record 7 million Americans are 3 months behind on their car payments, a red flag for the economy – The Washington Post 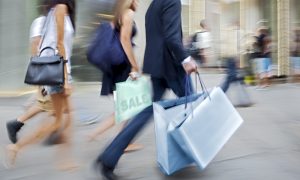 We’ve seen the reports of rising consumer debt, and a new one confirms one aspect of our Cash-strapped Consumer investing theme —  “wage growth has been stagnant for five years for a large segment of the working populace — and that using cards is the result of the simple fact that people have to use them to cover their basic living expenses.“

Sums it up in a nutshell, don’t you think?

The downside of higher debt levels, especially in a rising rate environment, is more income goes to servicing that debt shrinking disposable income in the process. Less disposable income means either more borrowing or less spending – one is a band-aid that will only drive interest payments higher later, while the other is a headwind to consumer spending.

No matter how you slice it, the eventual end result is the same. We at Tematica see this as positive for those companies that embrace our Cash-strapped Consumer and Cashless Consumption themes even though this is a headwind to domestic economic growth.

Credit card debt accounts for roughly one trillion of that number.“Where did the growth [in credit card debt] come from?” Schwartz asked rhetorically.  “Is it because card companies reached further down-market to pull more near- and sub-prime credit users into the market?

Or are we seeing more growth from the more affluent consumers who have higher [credit] scores and the ability to spend more?”

Answering that question, he noted, is quite complicated ten years after the recession,  because the answer is actually both — and it depends on what tranches of borrowers one looks at. The reality he said, is that wage growth has been stagnant for five years for a large segment of the working populace — and that using cards is the result of the simple fact that people have to use them to cover their basic living expenses.“

People have been using credit just to live their lives,” Schwartz said. “They aren’t putting $10,000 on their cards to take a fancy vacation — people have living expenses, and that is what is getting put on cards. I think we have seen a lot of that happen.”