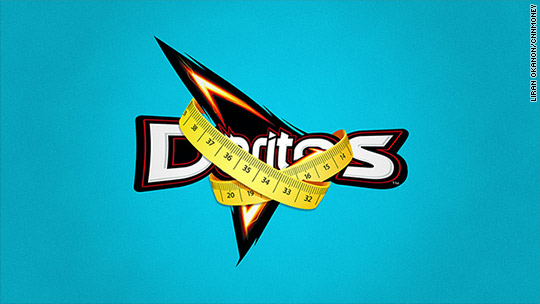 We’ve seen this trick more than a few times by food and other consumer product companies – shrink the package size and keep prices unchanged. A shifty version of a price increase if you ask us. Why do these companies embark on such a move? Largely because costs are rising, perhaps to the Scare Resource nature of certain commodities or the impact of currency shifts, and their pricing power is limited. We’ve seen this time and time gain at companies like JM Smucker and a bag of coffee that is no longer a pound in size to cereal from General Mills in tiny boxes. This stealth price increase means buying more to get amounts one might need – good for company sales and profits, but another thorn in the side of the Cash-strapped Consumer.

Mars has cut down the size of the bags of M&M and Maltesers in the U.K., while PepsiCo (PEP) decided to shrink packages of Doritos chips and other products.”We have been absorbing rising raw material and operational costs for some time, but the growing pressures mean that we can’t keep things as they are,” a spokesperson for Mars said Thursday.

A sharp decline in the value of the pound following Britain’s vote to leave the EU has pushed up prices of many imported goods, from food to electronics.

The pound has dropped 17% against the dollar since the referendum last June.

Commodities including cocoa are priced in dollars, so British producers are paying more for them. And factory costs have also gone up significantly in recent years.

Mondelez International (MDLZ) sparked outrage late last year after it changed the shape of its popular Toblerone bar. By adding space between the triangles, the company was able to keep the bar’s original packaging and length, but reduce the amount of chocolate.

Last Wednesday the European Central Bank (ECB) announced that it is launching its own quantitative easing program that was double what had been rumored, at an impressive €1.2 trillion. ECB Chairman Mario Draghi was able to pull off a program of this size by having some 80% of the bond-buying executed by national central banks. The agreement is that Germany will only buy German government bonds, France will only buy French bonds and so on. This was key to getting the program approved because if Spain or Italy goes off the rails, the German Bundesbank’s balance sheet won’t be immediately devastated. This is the main driver behind the rally in German bonds beyond the periphery bonds, which is also driving the rally in US bonds, as the markets can’t indefinitely maintain such a large spread between the only perceived risk-free rates left!

Despite all the rhetoric concerning how the economy is so very ship shape and all is going well on at least this side of the Atlantic, last year the best performing sectors were defensive ones: utilities and healthcare. This year with the crash in oil prices, the energy sector is forced to significantly delay capital expenditures and will by necessity put downward pressure on wages. Gasoline and diesel prices across the US have now fallen for a record 16 straight weeks. For the rest of the economy, the threat of global slowing and deflation may make many businesses hesitant to invest aggressively in expansions.

Central bankers across the globe have been on the frontlines of the newest form of international altercations, currency wars, which is driving yields into truly bizarre territory. Two weeks ago the Swiss National Bank removed the three-year currency cap on the franc and cut key rates having told the market just a month earlier that there were in fact no plans to remove the cap, sending markets into a veritable tizzy. India cut its key rate by 25 basis points and Bank of Korea lowered its outlook. Last week the Bank of Canada surprised everyone by lowering its main interest rate by a quarter percentage point for the first time since 2009. In Japan, Bank of Japan Governor Kuroda cut the nation’s core inflation forecast to 1% from 1.7%. Earlier last week the International Monetary Fund cut its forecast for inflation in advanced nations almost in half.   The result of these moves has left the Swiss 10-year yield in negative territory, the German 10-year at 0.52%, the French 10-year at 0.70% and the Japanese 10-year at 0.23% given that expected rates of inflation are all above these levels in their respective nations, 10-years in much of the develop world are now in negative real yield territory.   The currency war is on!

Those negative real yields reflect that most European countries are in or nearly in a recession. Italy for example is in a recession for the third time in six years, suffering from a 9% drop in output since 2008, and with unemployment increasing steadily from 7.8% in 2009 to 13.4% in November 2014. The ECB is expected to inject a massive monetary stimulus in an attempt to bolster the economies of these beleaguered nations, but the root of the problem isn’t monetary, thus the solution cannot solely be monetary. For example, in the January 10th edition of the Economist, Rwanda, which was in a bloody civil war just 20 years ago, is now cited to be a better place to do business than Italy! (Remember how we earlier mentioned that it is easier to start a business in Italy than in the U.S.?) No amount of monetary stimulus can fix those structural problems.

So we have defensive sectors outperforming and a material decline in trading volume, which tells you that investors are nervous.   Which brings us to the recent turn around in the yellow metal. Gold has traditionally had an inverse relationship with the dollar. For example, over the past four years the SPDR Gold Shares ETF (GLD) has had a -0.45 correlation with the Amex Dollar Index (DXY). From December 15th through yesterday, that correlation had completely reversed to be 0.75.   In 2015 so far, the correlation has been a mind-boggling 0.84! That’s a nearly perfect positive correlation. With central bankers around the world under pressure to manipulate their currency so as to inflate asset prices rather than having elected politicians deal with the very real structural problems, we believe it is no surprise to see gold once again showing strength. It has long been viewed as one of the only reliable stores of value and as long as the currency wars wage, will likely show continued strength, albeit with bumps along the way.

In yet one more example of the rule of unintended consequences, the Fed’s low interest rate policy and successive rounds of quantitative easing is supporting U.S. companies with their oversees investments. So in other words, United States citzens face a devalued currency, (which means our money will buy less) due to the rampant use of the Fed’s printing press, and other countries benefit from our companies expanding their operations outside of the U.S.  Borrow cheaply here, invest it over there. Was this what they had in mind? As always, tinkering around with the economy, much like my forays into home remodeling, always leads to unintended consequences that can be quite costly.  My favorite quote has to be from Richard Fischer, the President of the Federal Reserve Bank of Dallas in an October 19th speech, “I have begun to wonder if the monetary accommodation we have already engineered might even be working in the wrong places.”  Click here for the full article on Bloomberg.