As the velocity of June quarter earnings reports slows, in this issue of Tematica Investing we’re going to examine how our Middle-Class Squeeze investing theme is impacting the housing market and showcase a Digital Lifestyle theme company that I think subscribers would be smart to avoid. I’m also keeping my eyes open regarding the recent concerns surrounding Turkey and the lira. Thus far, signs of contagion appear to be limited but in the coming days, I suspect we’ll have a much better sense of the situation and exposure to be had.

With today’s issue, we are halfway through the current quarter. While the major market indices are up 2%-4% so far in the quarter, by comparison, we’ve had a number of strong thematic outperformers. These include Alphabet (GOOGL), Amazon (AMZN), Apple (AAPL), AXT Inc. (AXTI), Costco Wholesale (COST),  Habit Restaurant (HABT), Walt Disney (DIS), United Parcel Service (UPS), Universal Display (OLED) and USA Technologies (USAT).  That’s an impressive roster to be sure, but there are several positions that have lagged the market quarter to date including GSV Capital (GSVC), Nokia (NOK), Netflix (NFLX), Paccar (PCAR) and Rockwell Automation (ROK). We’ve also experienced some pain with Dycom (DY) shares, which we will get to in a moment.

Last week jettisoned shares of Farmland Partners (FPI) following the company taking it’s 3Q 2018 dividend payment and shooting it behind the woodshed. We also scaled into GSVC shares following GSV’s thesis-confirming June quarter earnings report, and I’m closely watching NFLX shares with a similar strategy in mind given the double-digit drop since adding them to the Tematica Investing Select List just over a month ago.

Last week we unveiled our latest investing theme here at Tematica – Digital Infrastructure. Earlier this week, Dycom Industries (DY), our first Digital Infrastructure selection slashed its outlook for the next few quarters despite a sharp rise in its backlog. Those shared revisions are as follows:

What caught my eyes was the big disparity between the modest top line cuts and the rather sharp ones to the bottom line. Dycom attributed the revenue shortfall to slower large-scale deployments at key customers and margin pressure due to the under absorption of labor and field costs – the same issues that plagued it in its April quarter. Given some of the June quarter comments from mobile infrastructure companies like Ericsson (ERIC) and Nokia (NOK), Dycom’s comments regarding customer timing is not that surprising, even though the magnitude to its bottom line is. I chalk this up to the operating leverage that is inherent in its construction services business, and that cuts both ways – great when things are ramping, and to the downside when activity is less than expected.

We also know from Ericsson and Dycom that the North American market will be the most active when it comes to 5G deployments in the coming quarters, which helps explain why Dycom’s backlog rose to $7.9 billion exiting July up from $5.9 billion at the end of April and $5.9 billion exiting the July 2017 quarter. As that backlog across Comcast, Verizon, AT&T, Windstream and others is deployed in calendar 2019, we should see a snapback in margins and EPS compared to 2018.

With that in mind, the strategy will be to turn lemons – Monday’s 24% drop in DY’s share price – into long-term lemonade. To do this, we are adding to our DY position at current levels, which should drop our blended cost basis to roughly $80 from just under $92. Not bad, but I’ll be inclined to scale further into the position to enhance that blended cost basis in the coming weeks and months on confirmation that 5G is moving from concept to physical network. Like I said in our Digital Infrastructure overview, no 5G network means no 5G services, plain and simple. As we scale into the shares and factor in the revised near-term outlook, I’m also cutting our price target on DY shares to $100 from $125.

Now, let’s get to how our Middle-Class Squeeze investing theme is hitting the housing market, and review that Digital Lifestyle company that we’re going to steer clear of because of Facebook (FB). Here we go…

If not single-family homes, where are the squeezed middle-class going?

To own a home was once considered one of the cornerstones of the American dream. If we look at the year to date move in the SPDR S&P Homebuilders ETF (XHB), which is down nearly 16% this year, one might have some concerns about the tone of the housing market. Yes, there is the specter of increasing inflation that has and likely will prompt the Federal Reserve to boost interest rates, and that will inch mortgage rates further from the near record lows enjoyed just a few years ago.

And let’s keep in mind, homes prices are already the most expensive they have been in over a decade due to a combination of tight housing supply and rising raw material costs. According to the National Association of Home Builders, higher wood costs have added almost $9,000 to the price of the average new single-family since January 2017.

Already new home sales have been significantly lower than over a decade ago, and as these forces come together it likely means the recent slowdown in new home sales that has emerged in 2018 is likely to get worse.

Yet our population continues to grow, and new households are being formed. 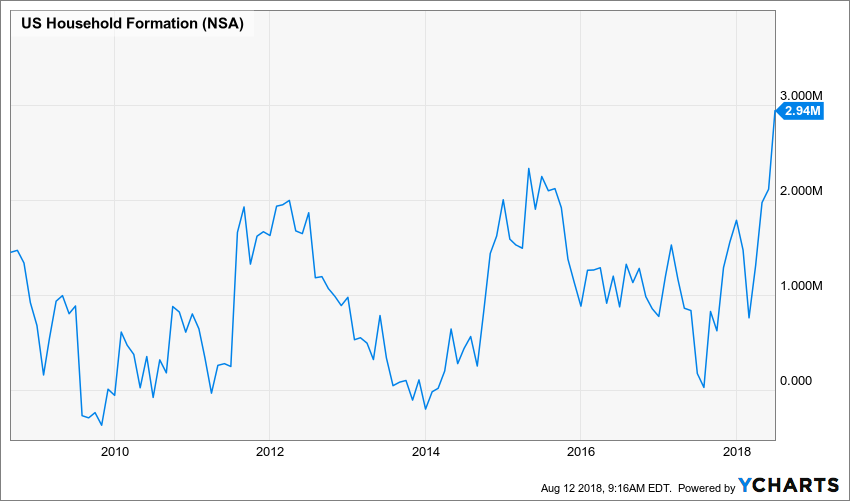 This prompts the question as to where are these new households living and where are they likely to in the coming quarters as homeownership costs are likely to rise further?

The answer is rental properties, including apartments, which are enjoying low vacancy rates and a positive slope in the consumer price index paid of rent paid for a primary residence.

There are several real estate investment trusts (REITs) that focus on the apartment and rental market including Preferred Apartment Communities, Inc. (APTS) and Independence Realty Trust (IRT). I’ll be looking at these and others to determine potential upside to be had in the coming quarters, which includes looking at their attractive dividend yields to ensure the underlying dividend stream is sustainable. More on this to come.

As important as it is to find well-positioned companies that are poised to ride prevailing thematic tailwinds that will drive revenue and profits as well as the share price higher, it’s also important to sidestep those that are running headlong into pronounced headwinds. These headwinds can take several forms, but one of the more common ones of late is the expanding footprint of companies like Alphabet (GOOGL), Amazon (AMZN) and Facebook (FB) among others.

We’ve seen the impact on shares of Blue Apron (APRN) fall apart over the last year following the entrance of Kroger (KR) into the meal kit business with its acquisition of Home Chef and investor concerns over Amazon entering the space following its acquisition of Whole Foods Market. That changing landscape highlighted one of the major flaws in Blue Apron’s subscription-based business model –  very high customer acquisition costs and high customer churn rates. While we warned investors to avoid APRN shares back last October when they were trading at north of $5, those who didn’t heed our advice are now enjoying APRN shares below $2.20. Ouch!

Now let’s take a look at the shares of Meet Group (MEET), which have been on a tear lately rising to $4.20 from just under $3 coming into 2018. The question to answer is this more like a Blue Apron or more like USA Technologies (USAT) or Habit Restaurant (HABT). In other words, one that is headed for destination @#$%^& or a bona fide opportunity.

According to its description, Meet offers  applications designed to meet the “universal need for human connection” and keep its users “entertained and engaged, and originate untold numbers of casual chats, friendships, dates, and marriages.” That sound you heard was the collective eye-rolling across Team Tematica. If you’re thinking this sounds similar to online and mobile dating sites like Tinder, Match, PlentyOfFish, Meetic, OkCupid, OurTime, and Pairs that are all part of Match Group (MTCH) and eHarmony, we here at Tematica are inclined to agree. And yes, dating has clearly moved into the digital age and that falls under the purview of our Digital Lifestyle investing theme.

Right off the bat, the fact that Meet’s expected EPS in 2018 and 2019 are slated to come in below the $0.39 per share Meet earned in 2017 despite consensus revenue expectations of $181 in 2019 vs. just under $124 million in 2017 is a red flag. So too is the lack of positive cash flow and fall off in cash on the balance sheet from $74.5 million exiting March 2017 to less than $21 million at the close of the June 2018 quarter. A sizable chunk of that cash was used to buy Lovoo, a popular dating app in Europe as well as develop the ability to monetize live video on several of its apps.

And then there is Facebook, which at its 2018 F8 developer conference in early May, shared it was internally testing its dating product with employees. While it’s true the social media giant is contending with privacy concerns, CEO Mark Zuckerberg shared the company will continue to build new features and applications and this one was focused on building real, long-term relationships — not just for hookups…” Clearly a swipe at Match Group’s Tinder.

Given the size of Facebook’s global reach – 1.47 billion daily active users and 2.23 billion monthly active users – it has the scope and scale to be a force in digital dating even with modest user adoption. While Meet is enjoying the monetization benefits of its live video offering, Facebook has had voice and video calling as well as other chat capabilities that could spur adoption and converts from Meet’s platforms.

As I see it, Meet Group have enjoyed a nice run thus far in 2018, but as Facebook gears into the digital dating and moves from internal beta to open to the public, Meet will likely see further declines in user metrics. So, go user metrics to go advertising revenue and that means the best days for MEET shares could be in the rearview mirror. To me this makes MEET shares look more like those from Blue Apron than Habit or USA Technologies. In other words, I plan on steering clear of MEET shares and so should you.