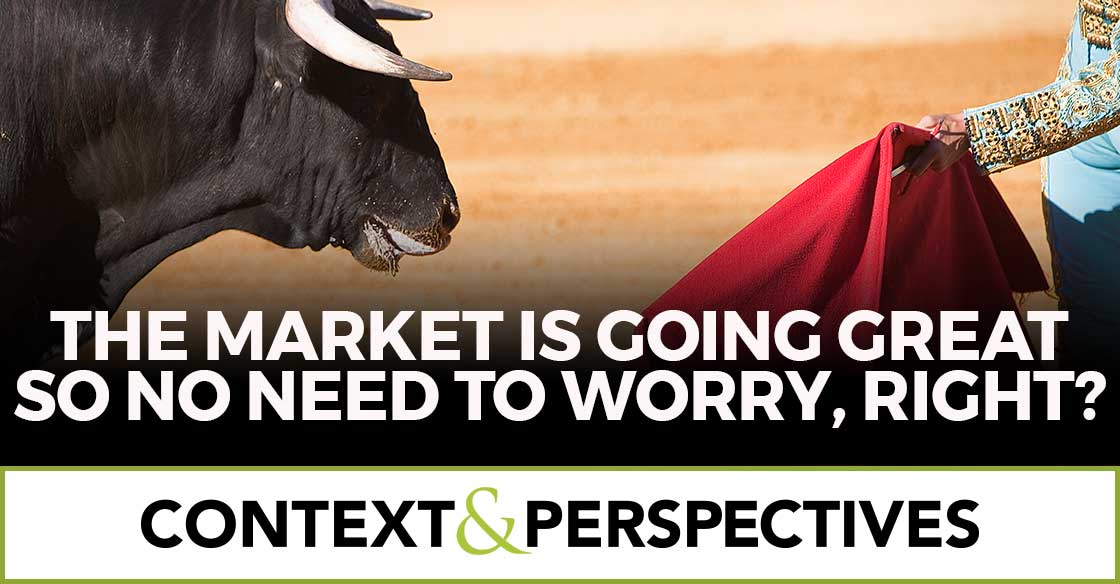 There are weeks when sitting down to write this piece is tough because not much worthy of note has happened in the markets or the economy outside of the usual noise. This week, that was most definitely not the case. Thank God it is Friday – we all need a break.

New Market Highs and the Economy Gets Uglier

Thursday the S&P 500 closed at a new all-time high and is now above its 50-day, 100-day and 200-day moving averages. The Reserve Open Market Committee meeting debrief gave the market essentially what it wanted, a significantly more dovish stance with plenty of reasons to believe future rate cuts are imminent. Perhaps the Marty Zweig adage, “Don’t fight the Fed,” has been flipped on its head to “Fed, don’t fight the markets.” Unemployment is at multi-decade lows with more job openings than unemployed persons, rising hourly earnings, and improving retail sales while the market hits all-time highs and yet the Fed is preparing to stimulate. Yeah, something’s off here.

Stocks may be partying like it is 1999 (for those who remember that far back) but the yield on the 10-year closed at 2.01% Thursday. To put that in context, on June 9th when the 10-year was down to 2.09%, the Wall Street Journal ran an article asserting that, “Almost nobody saw the nosedive in bond yields coming, but a few players were positioned well enough to profit. Some think there is more room for yields to fall further,” along with this chart. To be clear, despite not one respondent predicting the yield on the 10-year would fall below 2.5% in 2019, none of these economists are idiots, but the thing is they all tend to read from the same playbook.

The stock market is giddy over its expectations for lower rates, yet the spread between the 3-month and the 10-year Treasury has been inverted for four weeks as of this writing, not exactly a ringing endorsement for economic growth prospects. Every time this curve has been inverted for 4 consecutive weeks, it has been followed by a recession (hat tip @Saxena_Puru) for this chart. Note that the chart uses 10-year versus 1-year until the 3-month became available in 1982. Much of the mainstream financial media and fin twit believe this time is different. Time will tell.

Then there is this, with a hat tip to Sven Henrich whose tweet with a chart from Fed went viral – that in and of itself says a lot.

Both US imports and exports have declined from double-digit growth in 3Q 2018 to essentially flat today. The recent CFO Outlook by Duke’s Fuqua School of Business found that optimism about the US and about their own companies amongst CFO’s had fallen from the prior year.

The shipments of goods being moved around the country have plummeted since the beginning of 2018, as shown by the Cass Freight Index.

But hey, the market is going great so no need to worry right? If that’s what you are thinking, skip this next chart from @OddStats.

Geopolitics – From Bad to Oh No, No No

Brinksmanship with Iran continues as in the early hours of Friday we learned that the US planned a military strike against Iran in response to the shooting down of an American reconnaissance drone. The mission was called off at the last minute after the President learned that an estimated 150 people would likely have been killed. Frankly, the official story sounds a bit off, but what we do know is that we are in dangerous territory and one can only hope that some cooler heads prevail, and the situation gets dialed back a whole heck of a lot.

Given we weren’t enjoying enough nail-biting out of the Middle East news, an independent United Nations human rights expert investigating the killing of Saudi journalist Jamal Khashoggi is in a 101-page report recommending an investigation into the possible role of the Saudi Crown Prince Mohammed bin Salam citing “credible evidence,” and while not specifically assigning blame to bin Salam, did assign responsibility to the Saudi government. This week the US Senate voted to block arms sales to Saudi Arabia, rebuking the President’s decision to use an emergency declaration to move the deal forward. This matters when it comes to investing because there are some seriously high-stakes games being played out that have the potential to suddenly rock markets without any warning.

Over in more and more data points pointing to a slowing economy, which led to European Central Bank President Mario Draghi to announce that more stimulus could be in the works if inflation fails to accelerate. At the ECB’s annual conference in Sintra, Portugal Draghi stated “In the absence of improvement, such that the sustained return of inflation to our aim is threatened, stimulus will be required.” It isn’t just inflation that is troubling the region. Euro Area Industrial Production (ex Construction) has only seen increases in 2 of the last 11 months.

Italy continues to struggle with its budget deficit outside the limits allowed by the European Union, leading to a battle between Rome and Brussels. Friday Deputy Prime Minister Matteo Salvini (head of the euro-skeptic Lega party) threatened to quit his position if he is not able to push through tax cuts for at least €10 billion. While the US has been laser-focused on the Fed (and the president’s tweets) the Italian situation is getting and a time when UK leadership with respect to Brexit is also getting a lot . To put the Italian problem in perspective and understand why this problem is not going away, look at the chart below.

Today, Italy’s per capita GDP is 2.8% BELOW where it was in 2000 while Germany is 24.8% higher. Even the beleaguered Greece has outperformed Italy. Italy’s debt level is material to the rest of the world, its economy is material to the European Union, its citizens are losing their patience and its leadership consists of a tenuous partnership between a far-right, fascist-leaning Lega and a far-left, communist(ish) 5 Star movement lead by folks that very few in the nation respect. So that’s going well.

As if the European Union didn’t have enough to worry about as its new parliament struggles to find any sort of direction or agreement on leadership, the parliamentary process for selecting the next Prime Minister of the UK is down to two finalists. Enthusiam is rampant.

A hard Brexit is looking more likely and that is not going to be smooth sailing for anyone.

All this is a lot to take in, but there is a bright light for the week. Anna Wintour, Vogue’s editor-in-chief and eternal trend-setter, has given flip-flops her seal of approval. So, we’ve got that going for us. If that didn’t put a little spring into your step, I suggest you check out this twitter feed from Paul . Your soon-to-be more swimsuit ready abs will thank me, but your neighbors will wonder what the hell is going on at your place.