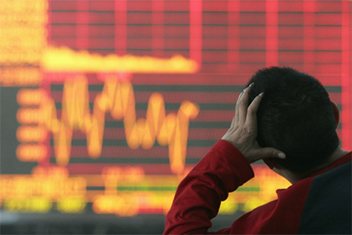 The U.S. dollar is continuing its steep decline today as the AMEX U.S. Dollar Index makes new lows for 2017 and is nearing the lowest point over the past year, pushing down towards 94. 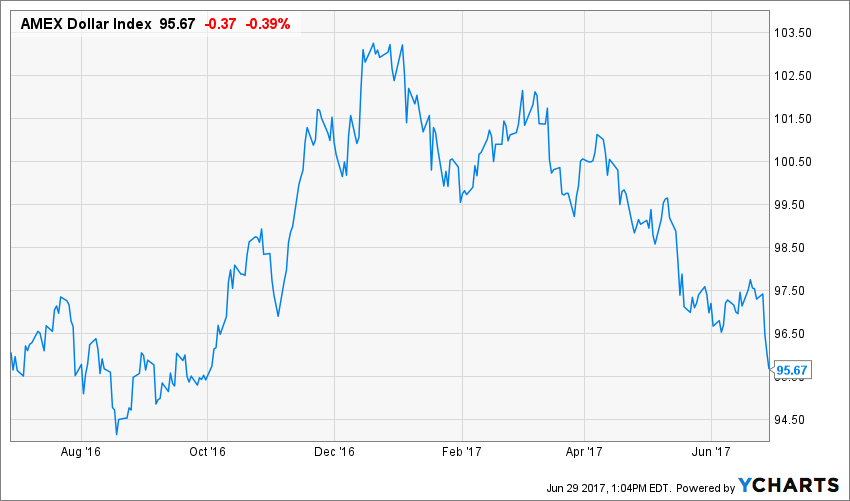 This represents not only an unwinding of the so-called Trump Trade, but speaks to how weak economic data has been coming in relative to expectations, (we’ve talked about this extensively which you can read about most recently here and here) AND relative to what we are seeing outside of the country. This decline has been driven primarily by the euro, the Mexican peso and the Japanese yen.

The dollar fell as the European Central Bank President, Mario Draghi, delivered a talk conveying more optimism for the European Union, citing growing political tailwinds, and the emergence of reflationary pressures. This came as Monday’s Durable Goods report showed the American economy is treading water, with Shipments and New Orders both dropping 0.2 percent month-over-month versus expectations for 0.4 percent gains. Core Capex has basically stagnated since February and despite all the euphoria in tech stocks, booking for new computers and electronics also declined 0.2 percent month-over-month and has now declined in 3 out of the past 4 months, which translates into a 6.5% decline on an annual basis: a long way from the 10 percent annual growth rate we saw at the start of 2017.

The Chicago Fed National Activity Index declined in May, the second decline in the past 3 months with the 3-month moving average essentially flatlining.

In Germany, the lfo business sentiment index recently hit a record high and across the Eurozone a collective sigh of relief can be heard as Italy is addressing its NPL (non-performing loan) problems. The latest was with a mix of state bailout, to the tune of €17b, on Banca Popolare di Vicenza and Veneto Banca that has equity and junior bondholders wiped out, protecting only senior note holders and depositors. More is likely to follow.

Looking at yesterday’s Consumer Confidence Survey, while the overall index rose from 117.9 to 118.9, it didn’t make up for the decline of 7.3 during April and May. That’s not terribly concerning, but this other bit in the details is. While the index for the Present Situation rose from 140.6 to 146.3 and is at the highest level since June 2001, Expectations fell again for the third consecutive month and are now at the lowest level since January. This type of divergence typically precedes a recession and if we look at these moves over the years, a recession typically hits 9 months after Expectations peak. That peak, so far, looks to have been in March.

Yes, but those Fed guys sound oh so confident despite tightening into an economy with slowing growth, declining inflation, weakening credit growth and a flattening yield curve. 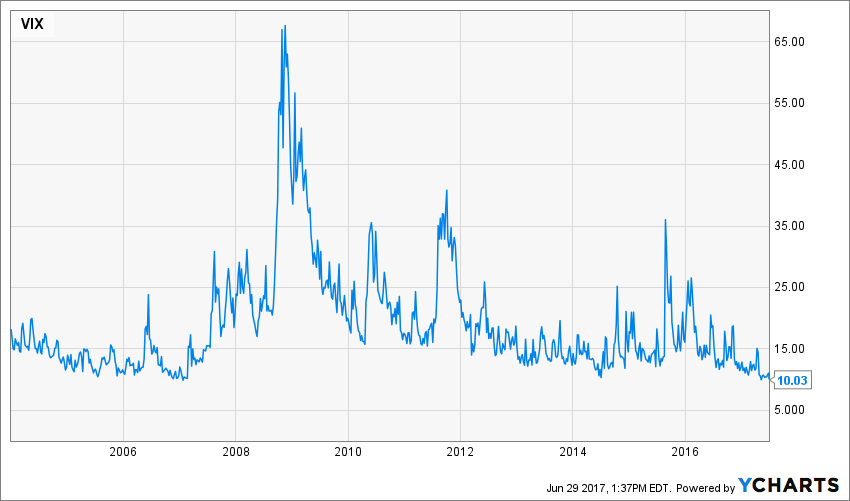 In the past month, short position contracts on the VIX have doubled to now sit at a record level.

Over in the bond market, the view of the economy isn’t all that rosy. As of June 20th, the net longs on the 10-year Treasury hit a level we haven’t seen since December 2007.

Today’s AAII Investor Sentiment report showed that neutral sentiment is at its highest level since last August at 43.4 percent while bullish sentiment declined from 32.7 percent to 29.7 percent. This market is seriously astounding with a record 130 consecutive weeks where half the investors surveyed were not bullish, while we’ve had such a smooth melt up in the first half of 2017. Only one other year have we seen even less of a pullback during the first half! Meanwhile, the Bears are also scratching their heads with bearish sentiment falling from 28.9 percent to 26.9 percent, the lowest level since the first week of the year.

With economic data coming in well below expectations while the market has continued its melt up (today notwithstanding) despite bonds telling a worrisome tale with falling long-term rates and a flattening yield curve, it is no wonder investor sentiment is increasingly a neutral “meh..” or perhaps more of an “Eh…?”

The Fed has trapped itself in a rate hike corner, having told the markets for nearly a year that the economy is doing great and it will need to raise rates, soon…very soon. Now there are signs of the economy weakening, other nations are devaluing their currencies and the U.S. is still stuck in ZIRP (Zero Interest Rate Policy). We’ve hit the point where the Fed must act or lose enormous credibility.

Yesterday was the biggest one-day decline in the Dow Jones Industrials Average since 2009 after the ECB provided less stimulus than was expected. This continued the decline that began with Janet Yellen’s testimony before Congress Wednesday, which left most market watchers thinking that a rate hike is all but assured. This morning we learned that private sector job growth for November came in above consensus expectations, which will have the market fairly convinced that a rate hike is all but assured. So what is this rate hike thing all about?

Why Do We Care About the Fed Rate Hike?

The rates set by the Fed act as the building blocks for all other interest rates, from the rates on your mortgage, to your auto loan, to rates of return on CDs and even corporate bond rates. When the Fed changes its rates, the rates on everything else move up or down with it as well. If the Fed does hike rates this month, for example, home mortgage rates will rise.  However, given that the Fed rate hike isn’t expected to be much, the increase will likely be minimal.

Why are super-low, zero rates a problem?

The problem with low rates is all about risk versus return. When the Fed pushes rates really low, it makes it hard to generate a reasonable return on savings. Right now this is particularly difficult for the nation given the baby boomers, the largest generation, are either in or about to enter retirement, when they need to generate income off their savings the most.

In order to deal with the low rates, investors are forced to take on more risk than they would otherwise.  You can think of risk as the likelihood of success. The higher the probability of success, the lower the demanded rate of return – no need to pay much to get people to invest in a nearly sure thing, but a really risky venture – now that takes a bigger promise of return to attract investors. So we have all these people needing to generate income from their retirement savings and they are being forced to take on more risk than they really should because interest rates are so low.

This has some major implications for the economy:

The next problem is the Fed has presented itself as being able to jump start the economy. The first quantitative easing problem began in November 2008 – seven years ago! If the Fed hopes to have any credibility concerning its ability to affect the economy, at some point it has to be able to say, “Look, it worked. The economy can stand on its own now!”

The Fed also faces asymmetric risk in that if the economy strengthens, it has plenty of room to hike rates, but if it weakens, there isn’t much room to maneuver as there is no evidence that negative rates at a central bank are stimulative.

The Fed has also been telling the markets for over a year that the economy was just about, almost there, oh so close… to being ready to stand on its own without the super low rates to support it. Chairwoman Janet Yellen has been telling us that she needed to see table job growth…well, we’ve been seeing at least headline job growth. (The underlying reality of the quality of the jobs is another thing entirely.)  Once again, the Fed is facing a credibility problem if they don’t raise rates here after so much lip service.
Problem is, our domestic rates are effectively being raised when other central banks around the world lower their rates.  The ECB just lowered their primary rate to NEGATIVE 0.3%.  Yup, they now charge interest on the money banks leave with them… That’s like Wells Fargo charging ME for the money I have in a savings account with them. However, the ECB didn’t lower rates as much as was expected which has given Yellen and company a much needed reprieve! Since the ECB didn’t go as negative as was expected, the dollar index actually fell over 2% yesterday for its largest single day decline since 2009.

You can almost hear Draghi, “Here’s your chance Janet, if you are ever going to do it, do it now!” Want to bet that after the Fed raises this month, the ECB will lower rates again further?

With the US raising rates while other major economies are lowering rates… some to even below zero, that makes the US dollar stronger and stronger.  Now this is fantastic for traveling as an American, but it is pure hell for American businesses that sell internationally. This means they sell less and will need to look to making more of their stuff outside the US where it is cheaper.

The strengthening dollar is also a major problem for emerging markets.  Earlier we talked about how investors needed to put money in riskier stuff than normal to try and generate any sort of reasonable return. One of the places they put money was in emerging markets.  Companies in these economies figured out that Americans were desperate for returns and they could get us to invest if they sold bonds denominated in US dollars.  Given that the dollar has been falling in value since the mid 1980s, with a brief upturn around the dotcom boom/bust, these companies were confident that they could issue in USD and lower rates than in their domestic currency, but wouldn’t likely have to worry about the exchange rate changing against them.

Ooops –the dollar has been strengthening significantly, which means those bonds are becoming insanely expensive for companies in emerging markets and many will end up defaulting. Ouch!  That hurts investors, but also isn’t likely to make us a whole lot more friends around the world. An argument can easily be made that we exported the pain we would have felt from all that quantitative easing to emerging markets and now they are paying the price for us! Not helpful at a time when the US is already struggling with its international relations.