As you sit down and digest this latest issue of Tematica Investing, you’ll notice it’s a tad shorter than the usual 6-10 pages that we fill to the brim. On the one hand, we’re inclined to say “you’re welcome,” but the reality is with the market rangebound over the last 20 plus days, the presidential inauguration about to take-over the news cycle, the velocity of earnings reports about to pick up, and Eurozone drama likely to re-emerge in the coming days, we’ve opted to see how things unfold over the next several days before making any new moves with the Tematica Select List.

Is the Trump Rally Over as Investors Keep the Markets Range Bound Since the New Year?

Since last week’s Tematica Investing, we’ve seen the overall stock market little changed, with the Dow Jones Industrial Average down slightly, the S&P 500 essentially flat and the Nasdaq Composite Index up a tick. 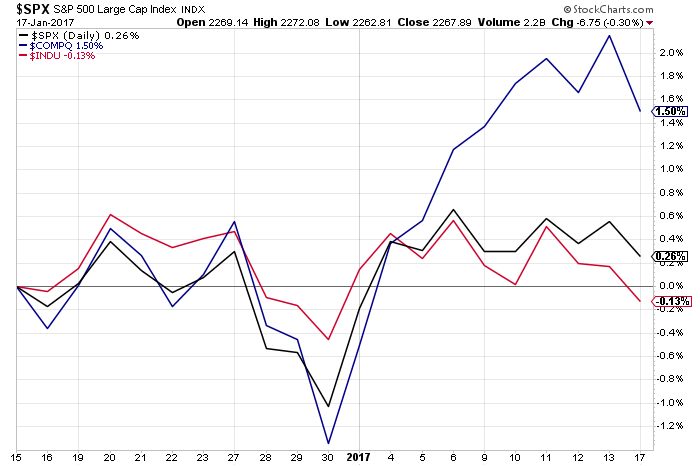 We’ve had a number of favorable moves on the Tematica Select List, with Facebook (FB) climbing more than 2 percent and Amazon (AMZN) up more than 1.5 percent with favorable moves in International Flavors & Fragrances (IFF), AT&T (T), Costco Wholesale (COST) and Universal Display (OLED) were had. Several Tematica Select List positions moved relative sideways during the week, like Alphabet (GOOGL) and Nuance Communications (NUAN), but we see that as treading water ahead of the earnings report deluge.

As the market braces for the deluge of fourth quarter earnings announcements, we continue to find confirming data for our active positions. Case in point, reports that smartphone vendors are concerned Apple (AAPL) could “monopolize OLED supply capacity for this year’s iPhone 8,” and are looking to secure organic light emitting diode capacity fits with our thesis and bodes well for our Universal Display (OLED) shares.

Another, even though we just added Disruptive Technology theme company Nuance Communications (NUAN) to the Tematica Select List last week, we continue to hear about new voice-enabled applications like the one from Adobe Systems (ADBE) called “intelligent digital assistant photo editing” that is more simply put a voice-controlled photo editor. We have to admit, we are rather excited for that one assuming it helps reduce the trial and error effort to touch up photos and get rid of all those red eyes.

As we mentioned above, we are preparing to drink from a firehose-like deluge of earnings announcements this week and the next few. As evidenced by what we’ve seen thus far from JPMorgan Chase (JPM), Bank of America (BAC), PNC Bank (PNC), United Continental (UAL), WD40 (WDFC), CSX (CSX) and Gigamon (GIMO) it’s going to be a rather mixed bag of reports over the coming weeks. Once again we’re seeing earnings misses relative to expectations lead to falling stock prices. Not a bad thing considering how far and how fast the stock market has jumped since early November, especially if you’ve been a prudent investor like we have been these past several weeks. During that time we added Rise & Fall of the Middle Class McCormick & Co. (MKC), Facebook (FB) as our latest Connected Society play and last week Nuance Communications (NUAN) given its disruptive voice technology.

While we could point out that all three have moved nicely higher, especially Facebook, which certainly has us feeling pretty good, it’s the opportunity to circle back to the ones that got away that has us rather excited this earnings season. It’s not that we want bad news, but rather the opportunity to buy well positioned, thematically driven businesses at better prices. That’s how we added Facebook shares to the Tematica Select List — we knew the company was a key player in our Connected Society investing theme, but we waited until we had a compelling risk-to-reward tradeoff in the share price.

This reminds us of one of “Uncle” Warren Buffet’s most used sayings, “Price is what you pay. Value is what you get.”

We suspect there will be far more value to be had in the stock market over the next few weeks compared to the last several as December quarter earnings kicks into gear. As we’ve shared in the last several issues of The Monday Morning Kickoff, expectations have been running high, but recently more investors have been scratching their heads as they put the economic reality puzzle pieces together and reassess what is “expected.” Making this even more challenging is we have the Volatility Index near its lowest levels in over a year. Looking at the chart below, the words “reversion to the mean” ring in our head.

What this tells us is should the news turn to something less than expected, we are bound to see a far more bumpy time in the market than the smooth sailing we’ve seen since early November.

Unless you live under a rock or are stuck under a very large piece of furniture with no access to a TV or the internet (yes, the internet has become so ubiquitous that it now lowercase), you know this week also marks the presidential inauguration, which will dominate headlines over the next few days. While we will watch the events of the week and listen to the speeches and confirmation hearings for clues as to what’s to come from the new Trump administration, we won’t be shedding a tear as we move past the event and onto the work that needs to be done.

As that happens, we also hope that President Trump rethinks his Twitter (TWTR) usage, but not necessarily for the same reasons as the media. While we like the push to bring jobs back to the US and put a more effective healthcare program in place, as investors we are not fans of the policy-by-bullhorn we have seen.

What makes this even more challenging is we have yet to receive a holistic view on what President-elect Trump’s policies will be, and this “keep them guessing” approach of one-off pronouncements may be good for his intended deal making, it’s added a layer of uncertainty for the stock market, and as we know the market doesn’t like uncertainty. 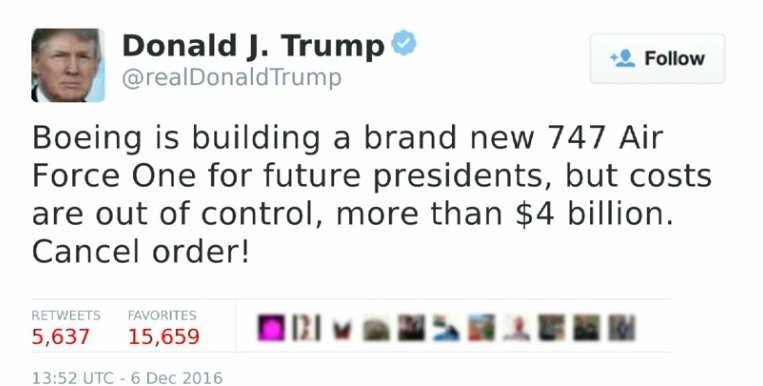 As we’ve seen from president-elect Trump’s tweets and interviews, his words have the potential to be very disruptive to the investment playing field:

Amidst All This Uncertainty, We’re Taking a Wait and See Approach

We’ve encountered many disruptions in the past and odds are these current events won’t be last. Over the last few years, we’ve seen earnings season become a greater source of stock price volatility — miss EPS expectations by a penny, and we now see share prices fall 10-20 percent, far greater than the single digits selloffs that had been the norm. These tend to be short-term disruptions that give way to market forces, which means that as we continue to focus on thematic fundamentals, we’ll be vigilant for opportunities presented by wide swings in stock prices.

With this in mind, we’re holding off making any moves with the Tematica Select List this week as we instead digest company comments regarding the tone of the economy, impact of the dollar on their business outlook and of course the strength of our thematic tailwinds.