Yesterday we talked about what the mainstream financial news isn’t telling you as the stock market continues to rise into headier and headier territory, so today we are going to discuss just what would need to happen for those lofty valuations to make sense and not feel like we are on a wobbly ladder climbing to the stars.

For stock prices to continue to rise from where they are today, either the P/E ratio needs to continue to move farther and farther away (as in higher) from historical norms, or earnings need to increase. It is possible that P/E ratios for individual stocks that have strong thematic tailwinds at their backs will continue to expand, like Amazon (AMZN) or Nuance Communications (NUAN) that are on the Tematica Select List. For the S&P 500 as a whole, the P/E ratio is well above historical norms but is still below the highest levels ever achieved.

Every time we have seen such lofty levels in the past, we typically see a parade of analysts rationalizing how this time things are different and those tired valuation norms of the past are no longer applicable. Every time we also then see those same analysts eventually with egg on their collective faces due to some known unknowns or unknown unknowns as Donald Rumsfeld would say. Sometimes that egg has flown at a glacial pace and that has us thinking about several rules from legendary great Bob Farrell. Let’s review:

Rule #1: Markets tend to return to the mean over time

When stocks go too far in one direction, they come back. Euphoria and pessimism can cloud people’s heads. It’s easy to get caught up in the heat of the moment and lose perspective.

Rule #2: Excesses in one direction will lead to an opposite excess in the other direction

Think of the market baseline as attached to a rubber string. Any action to far in one direction not only brings you back to the baseline, but leads to an overshoot in the opposite direction.

Rule #3: There are no new eras — excesses are never permanent

Whatever the latest hot sector is, it eventually overheats, mean reverts, and then overshoots. As the fever builds, a chorus of “this time it’s different” will be heard, even if those exact words are never used. And of course human nature never is different.

So yes, stock prices can continue to rise from lofty valuations, but risk versus reward looks increasingly unattractive.

Now let’s look at how that E (earnings) could rise which would make those valuations less lofty.

For earnings to increase, either revenue increases or margins improve or some combination of the two. So let’s first look at margins. The following chart shows US Corporate profits after tax (at a seasonally adjusted annual rate) as a percent of GDP going back to 1947, the earliest date for which I could pull the data without going completely mental. 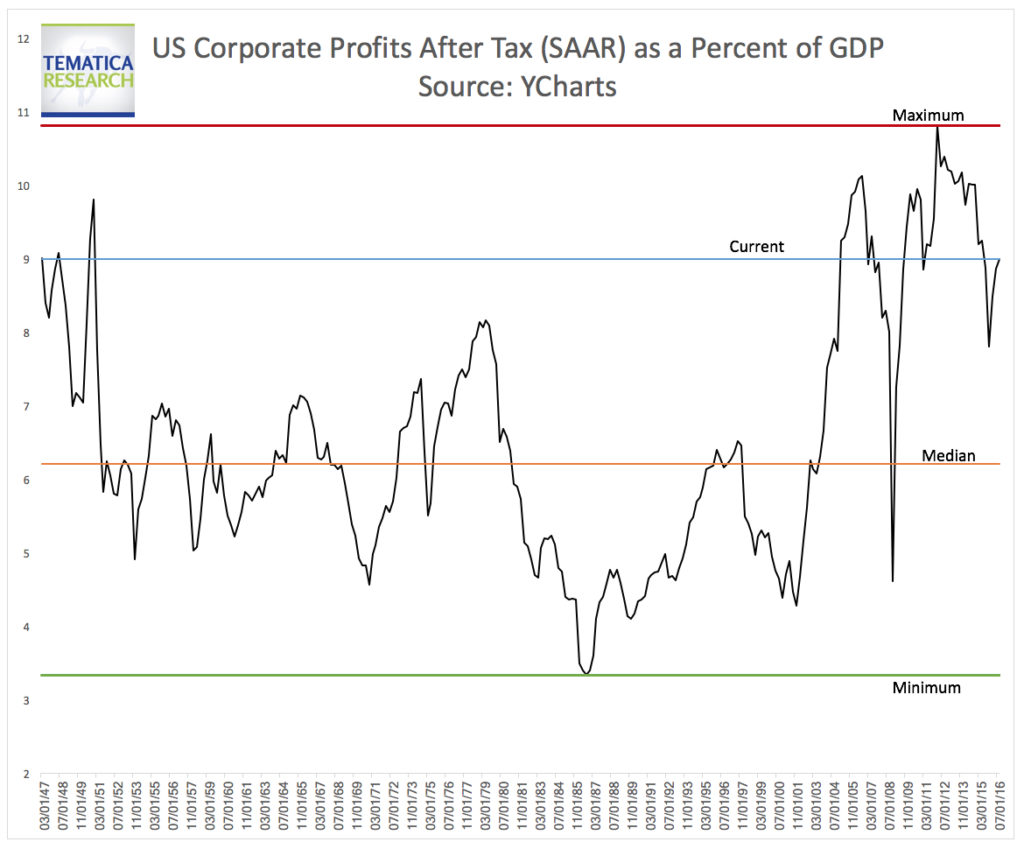 If President Trump can get through corporate tax cuts and reduce regulation, that would certainly reduce expenses for corporations and would thus increase their overall profitability, but given Farrell’s Rule #1, they are unlikely to remain a historically elevated percent of GDP. On the other hand, tariffs on imports which increase the cost of inputs American companies use would compress margins.

Investors need to keep another thing in mind, the growth we’ve been seeing in EPS hasn’t been all that genuine thanks to the boom in share buybacks, or as we like to call it, the Spanx and push-up bra of financial engineering. The fundamentals remained unchanged, but from afar figures look better!

So if increasing the percent of GDP attributed to corporate profits is unlikely, then how can we get GDP growing? An economy grows as a function of just two simple factors, growth in the workforce, an improvement in productivity levels or a combination of the two.

Our first challenge is that the working age population in the United States has been growing at a slower and slower rate. Even Fed Chairwoman Janet Yellen identified this during her congressional testimony yesterday. The following chart shows the monthly change in the working age population, aged 15 to 64 years and the twelve-month moving average, using data from the St. Louis Federal Reserve’s Fred System. 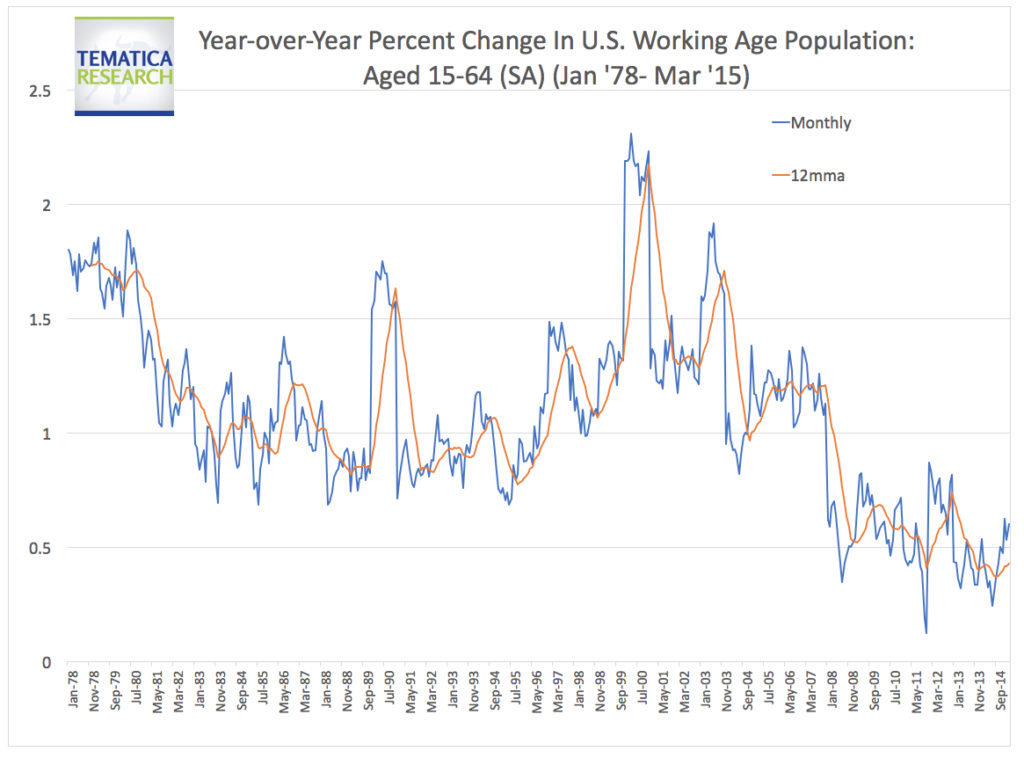 The events of September 11 coupled with the fallout of the financial crisis and later terror events have made the topic of immigration increasingly politically heated. Those who have lost their jobs and those who are fearful of further terrorist acts have very valid concerns, and we are making no assertions here as to what policies ought to be pursued to address those concerns, we are solely discussing the fundamental math involved.

American’s haven’t been getting their groove on as much in recent decades as the fertility rate in the United States has been declining, (as has been the case in much of the developed world) with the latest published rate at 1.86 percent. That is below what is necessary to keep the population level from shrinking. For the labor pool to grow, we need immigration of working aged people. The more immigration, the bigger the labor pool and the greater the potential economic growth rate. Policies which limit immigration, restrict the growth of the labor pool, thus limit the potential growth of the economy. Today’s political climate is such that we are likely to see less immigration rather than more.

The other factor that affects the growth of an economy is productivity. The following chart shows the change in productivity levels on a quarterly basis and on a rolling four quarter moving average going back to 1948, using data from the St. Louis Federal Reserve’s Fred System. 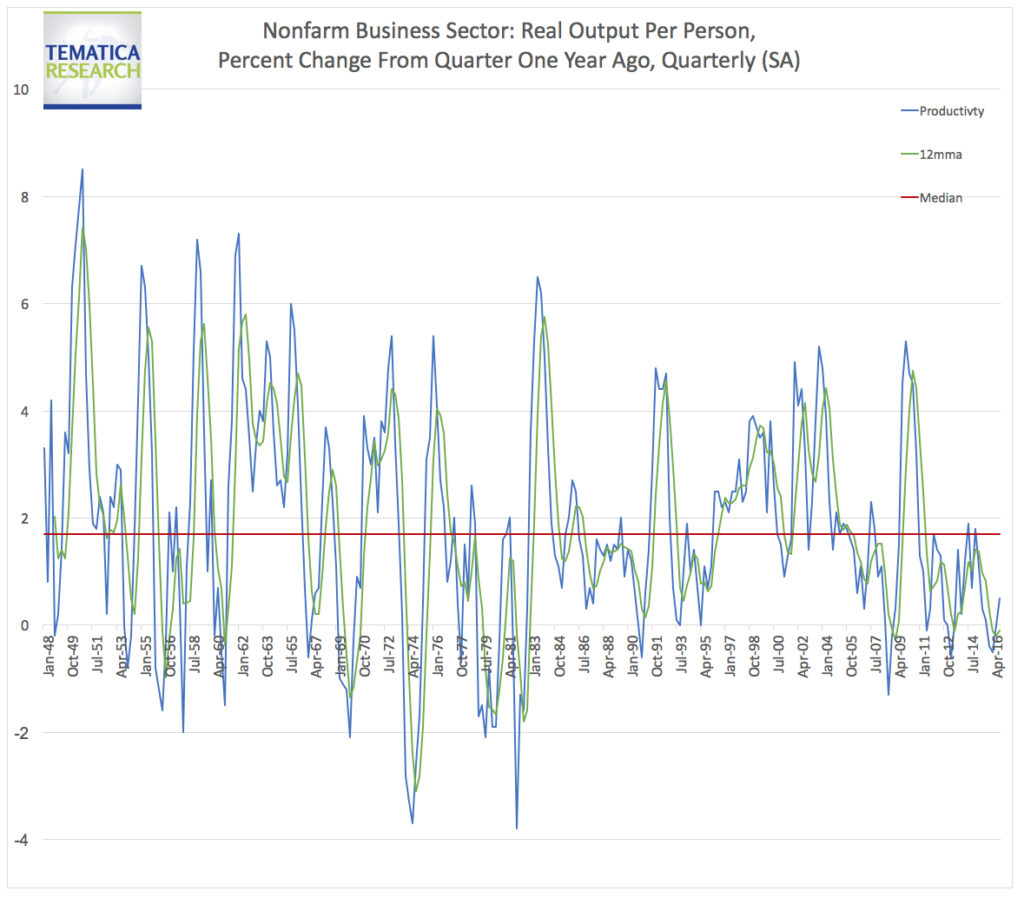 As you can see, productivity improvement peaked in October 1950 at 8.5 percent, with the peak rates declining since then. The declines over the past few decades have come after the technology-fueled boom of the late 1990s when strong productivity gains translated into robust growth in household incomes and the overall economy. Most recently, productivity levels have been consistently well below the historical median.

If we take a longer-term look, by focusing on the five-year moving average, the decline is even more apparent. 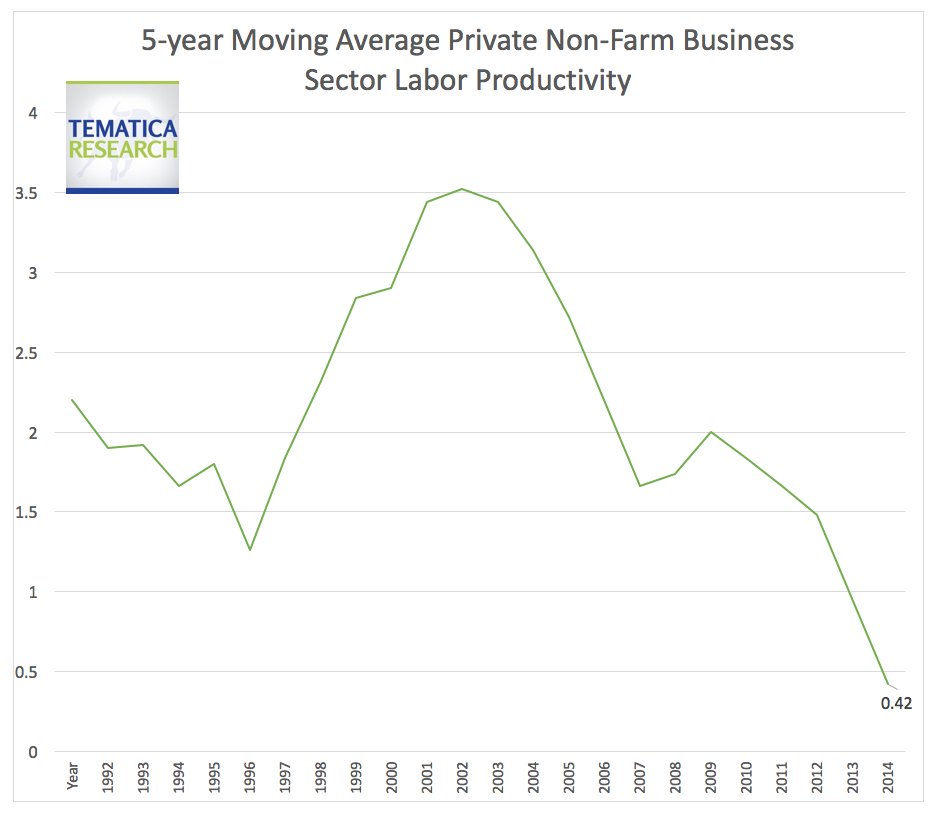 Most recently, productivity levels have been consistently well below the historical median which has likely been reinforced by unusually low levels of capital expenditures, otherwise known as business investment in new equipment, software, and facilities. Policies that support an increase in capital spending are likely to help increase labor productivity, which would be constructive for increasing the rate of growth for the economy.

Putting it all together

The market has been running hot on the assumption that President Trump’s election marks a significant shift away from a Presidency that was focused primarily on social issues to one focused primarily on growing the economy. Investors expect Trump will enact legislation that will positively impact corporate profits in direct and indirect fashion. In order for tax cuts or other significant legislation to be enacted, Trump will need most all Republicans in Congress to support him and will need some Democrats to cross the aisle. At this point, President Trump has the lowest approval rating of any president in history this far into his term and we are seeing a level of rancor in DC that is unprecedented in decades, which means that he faces significant challenges to get these measures passed.

The staffs of the House Ways and Means Committee and the Senate Finance Committee, which have jurisdiction over possible tax reforms, trade initiatives, and Obamacare have been reported as informally admitting that tax reforms are unlikely to be completed until the end of 2017, if not more likely in 2018. It is highly likely that the market may have jumped the gun, with expectations a year or so ahead of reality. We’ve seen this before and if history holds, it’s about as harmonious as a toddler not getting his or her ice cream on time.

In addition, there are simple economic realities that limit what can be done to accelerate growth within the near-to-medium term, such as slowing growth in the labor market and declining productivity rates. Materially improving either of those will take time.

Does this mean investors should head for the hills screaming and convert all their savings into gold bars buried in the backyard? For some, that may be the best way to sleep at night but isn’t something we’d recommend. What this analysis means is that there are an awful lot of challenges to be overcome in order to get the economy back on a sustained basis to higher rates of growth yet stocks are priced as if this is going to be a cake walk. To us, this means taking some defensive measures and/or diversifying one’s portfolio into areas that are more attractively priced, particularly, those benefiting from several of our thematic tailwinds.