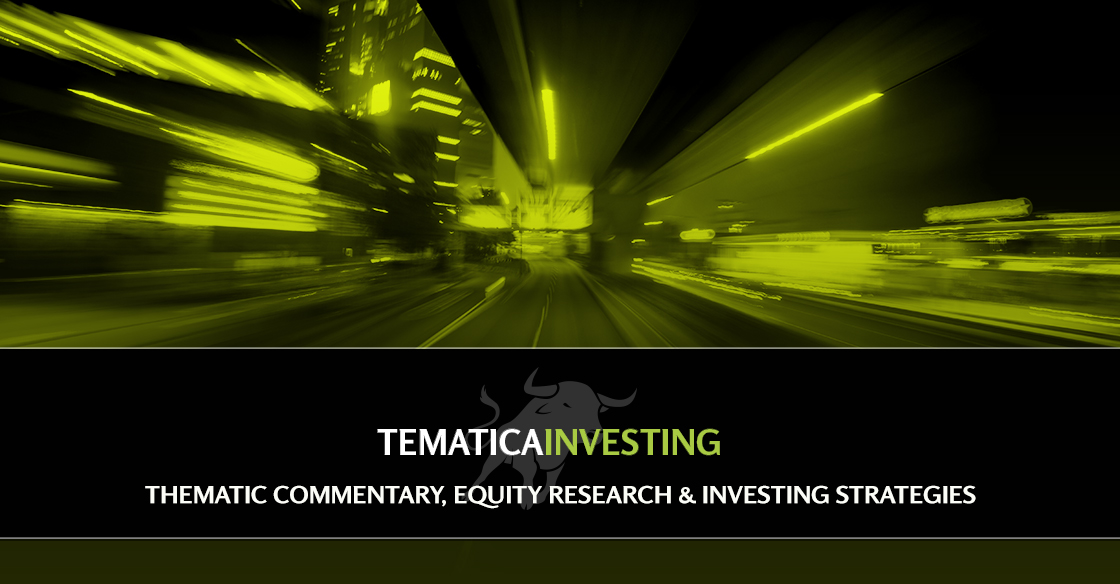 Last night President Trump addressed a joint session of Congress, and while it sounded somewhat like a campaign speech, the overall tone was far tamer and optimistic than we saw on the campaign trail and lacked his signature attacks. Even though there were no major policy shifts and as we expected few details, Trump called for both political parties to work together to get the country back on track after the last 8 years. That call for unity was far from surprising, given that in order to move tax reform ahead and replace the Affordable Care Act, Trumps needs a united GOP and support from at least some Senate Democrats. Given the quick exit of Democrats following Trump’s concluding remarks, odds are the President will have much work to do to get his agenda flowing.

There were a few surprises last night, including Trump’s softening stance on immigration as well as his calling on Congress to pass legislation to pave the way for a $1 trillion public-private infrastructure project. Trump has been rather vocal about the need to fix the country’s aging highways and byways, so the call itself isn’t surprising even though the price tag is larger than many expected. Again, the devil will be in the details for this public-private proposal given concerns for increasing the national debt even further than it has over the last several years.

All in all, it was a good speech and one that in our view signals a more presidential Trump, but for those looking for harder details there was little to be had and it looks like the policy timetable has probably been extended. While the stock market is gapping higher yet again today, it looks to us like it’s increasingly further out along its skis.

This morning we received the January reading on Personal Income & Spending, which showed income ticking up modestly month over month to 0.4 percent, but spending in January tumbled vs. that in December. Yes, there tends to be a seasonal dip following the holiday filled December, but even so, the January spending figure of 0.2 percent came in below the expected 0.3 percent reading. After dipping to 5.4 percent in December, the Personal Saving rate inched higher in January to 5.5 percent.

Now, that is a modest miss on the personal spending side of the equation, but when we pair it with January’s weaker than expected core capital goods orders and shipments, it’s another sign the domestic economy as a whole likely remains stuck in low gear this quarter. We talked about this earlier this week, as well as the current mismatch between GDP forecasts for the first half of 2017. Later this morning, we’ll get both the ISM Manufacturing Index and Markit Economics Final February Manufacturing PMI reports and we’ll be going over them to see what’s what when it comes to the current quarter’s GDP.

This morning also brought the final February Manufacturing PMI figures for the Japan and the Eurozone as well as the first viewing of the same for China. The final data for both the Eurozone and Japan are very much in line with the Flash reports we received last week, pointing toward a firming global economy from a  production and order perspective. The data also showed that their weaker currencies relative to the dollar is generating stronger export business; in the Eurozone, February saw the fastest growth of new export business in almost six years. While the February Manufacturing PMI figures of 53.3 and 51.7 in Japan and China clocked in lower than the 55.4 recorded for the Eurozone, the underlying economies continued to improved compared to several months ago. One of the key signs that we watch as an indicator of future business, orders, trended higher leading to the first expansion in work backlog levels in Japan since the end of 2015.

One other key element from these Final PMI reports was the pick-up in input costs due primarily to higher commodity and raw material costs. We’ll look for confirmation in both the Final Manufacturing PMI for the US as well as ISM’s February Manufacturing Index. Per data published by ISM, over the last few months prices have been expanding at a stronger pace and if this continues, we expect Federal Reserve representatives to talk more about inflationary prospects ahead of the March Federal Open Market Committee meeting.

On the back of President Trump sharing a $1 trillion infrastructure spending plan last night, should the February ISM and Markit data show continued manufacturing strength, we are likely to see share prices for companies like US Concrete (USCR), Ingersoll-Rand (IR), Home Depot (HD), and Granite Construction (GVA) that fit our Economic Acceleration/Deceleration investment theme benefit. The same can likely be said for shares of The Industrial Select Sector SPDR Fund (XLI) as well as Financial Select Sector SPDR Fund (XLF) should the market mentality shift to one that thinks a March rate hike for the Fed looks increasingly likely. Given the run several of these have had, we’re taking a hard look at what entry points offer subscribers a favorable risk vs. reward profile. 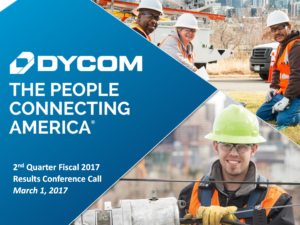 Early this morning Connected Society holding Dycom Industries (DY) a specialty contractor that serves the wireless and wireline industries, reported stronger than expected quarterly revenue and guided the current quarter ahead of expectations. For the January quarter, Dycom delivered EPS of $0.82, well ahead of the expected $0.69 and $0.54 in the year-ago quarter, on revenue that rose 25 percent year over year to $701.1 million, also well ahead of the $659.4 million that was expected.

Breaking down the quarterly revenues, organic contract revenue rose just under 23 percent and acquired businesses during the year added another $13.4 million. Year over year, adjusted EBITDA rose more than 29%, which in our view reflects solid cost control at its installations and projects, but we also recognize the 4 percent decline in the share count helped improve year over year EPS comparisons. Even so, it was a solid beat all the way around.

Details tend to be scant in the earnings press release, but the company does provide some additional details ahead of the earnings call. Peering over that material, we saw that Dycom’s customer composition that has had AT&T (T), Comcast (CMCSA), CenturyLink (CTL) and Verizon (VZ) among its top customers remained largely unchanged during the quarter. On a combined basis those four companies accounted for just over 70 percent of Dycom’s revenue in the quarter vs. just over 69 percent in the prior quarter and just under 63 percent in the year-ago quarter. We attribute that improvement to Dycom’s position with the wireless and wireline players that are building out network capacity and prepping to bring next generation networks to market in order to deploy more advanced service offerings.

We’ve noted previously the combined 2017 capital spending plans for AT&T, Verizon, CenturyLink and Comcast for broadband and wireless will be up modestly year over year with a greater portion of spending on network capacity and new technologies (5G, Gigabit fiber). We continue to see Dycom as a prime beneficiary of that wireless and wireline capital spending. In the earning press release, Dycom guided revenue for the current quarter, which is benefitting from mild winter temperatures, in the range of $715-$745 million vs. the consensus of $715.75 million with EPS in the range of $1.11-$1.24 compared to the consensus of $1.13. We expect far more details to emerge on the company’s earnings call that will be held this morning at 9 AM ET.

On the housekeeping front, this morning Dycom’s Board authorized an additional $75 million share repurchase.