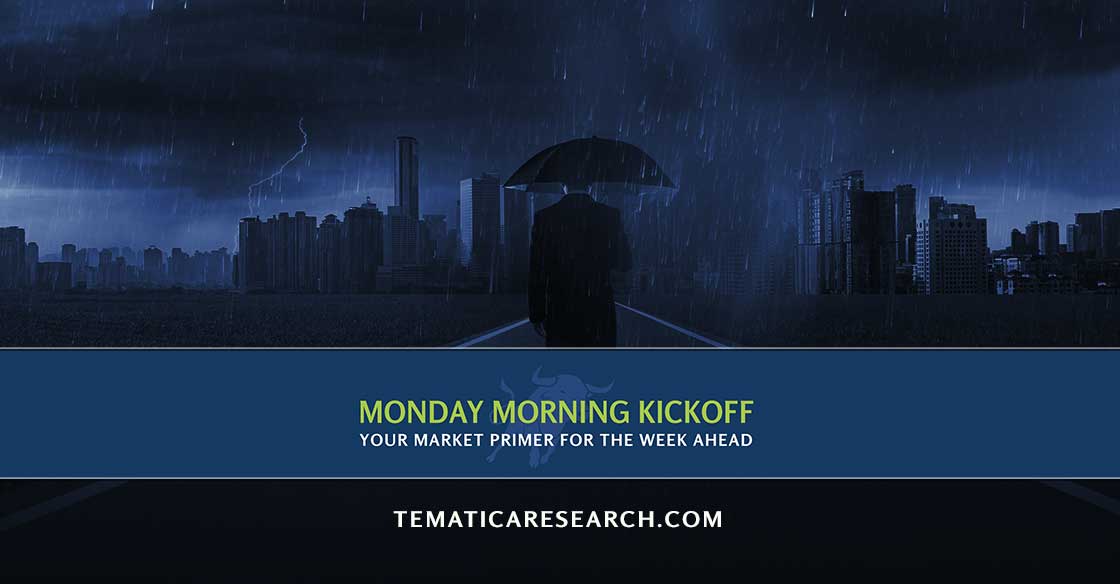 We had another several days chock full of earnings reports last week, more than 600 in all. We also saw much ado in Washington, with not only the “skinny” repeal of Obamacare failing the Senate vote, but also the shake up inside the White House with the arrival of Bull in the China Shop Anthony “the Mooch” Scaramucci as Director of Communications.  Capping the week off, Chief of Staff Reince Priebus resigned as White House Chief of Staff late last week.

As far as the failure, yet again, of the GOP to push forward healthcare reform, it raises the question as to what’s next for the GOP–. Tax reform? Another run at healthcare? Infrastructure spending? At the same time, the reshuffling of the deck in the Trump Administration just a little over six months into a term raises concern over what is going on in the White House, especially after the highly publicized exchange between Scaramucci and Ryan Lizza at The New Yorker.  All told, even though it gave late night talk show hosts much material to work with, it only adds yet another layer of uncertainty for investors as they assess.

That uncertainty also comes at a time when the initial reading for 2Q 2017 GDP missed expectations.

The number we got last week for GDP did represent a rebound compared to 1Q 2017; however, perspective is everything and historically the second quarter does tend to be one of the stronger quarters of the year due in part of inventory re-stocking.

Even so, the 2.6 percent for this year’s second quarter reading still missed the consensus expectation of 2.7 percent and the Atlanta Fed’s 2.8 percent forecast. Let’s remember too, all of those expectations have been inching down throughout the last several weeks as more data has been reported and so it’s more than just the raw number we have to look at, its the vector and velocity that’s important and as far as the economy goes, neither is headed in the right direction. 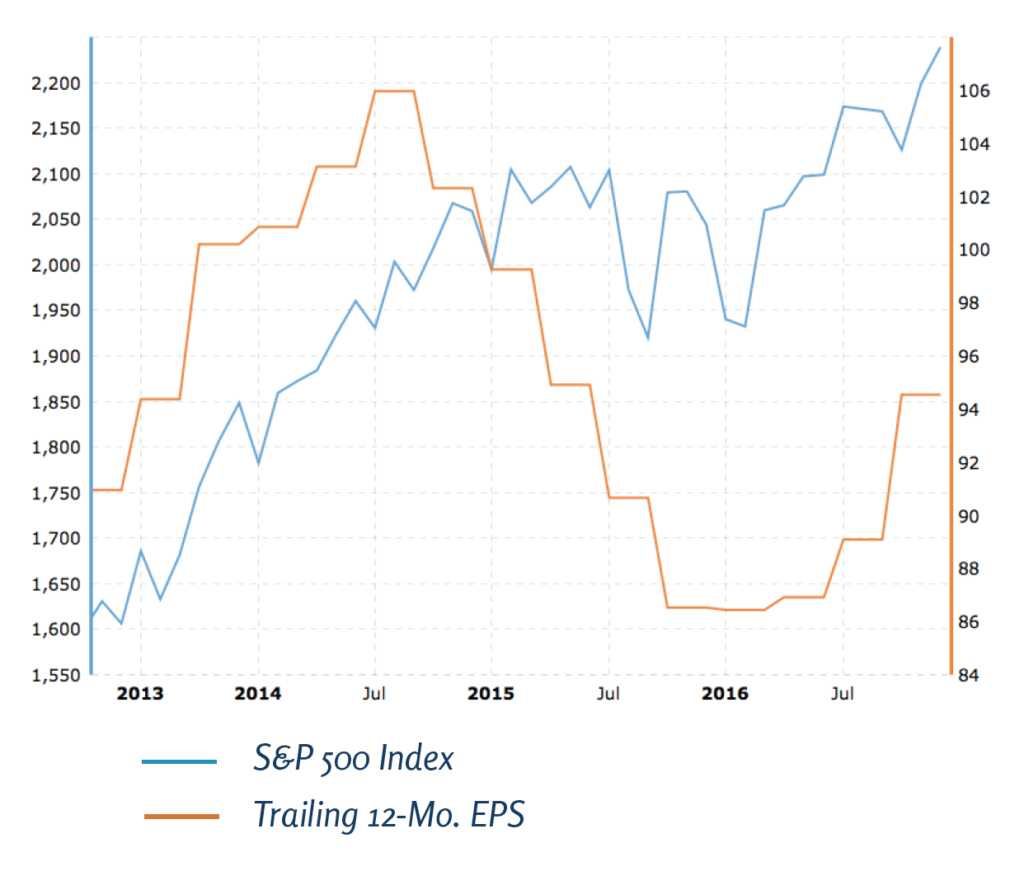 As we entered the current earnings season, we said one of the key things to watch would be corporate outlooks as they will set the tone for the back half of the year. Heading into the reporting season, expectations were clearly running high with EPS expectations for the S&P 500 to grow more than 11 percent compared to the first half of the year, well ahead of the 5.6 percent we’ve seen in the last several years.

Not to be repetitive, but rather to set the table, amid slowing domestic growth, consumers that are swimming in debt, a lack of real wage growth and an increasingly stalled White House agenda, our concern was executives would at a minimum temper their expectations for the coming months.

Peering through those 600 earnings reports, we found just that:

“ While I remain optimistic about our long-term future, the near-term environment has become more challenging than maybe we saw at the beginning of the year. So category growth has slowed broadly in lots of places over the last year or so, and we expect that growth will pick back up over time, but that pickup may not happen quickly.”

“I think the outlook is actually stable…in the U.S. and the progress is directionally good, but the speed is not that what we would like of course.”

“ . . .however you wanted to describe it, an eroding plateau…we don’t see anything in terms of the economy, the health of the consumer, housing, oil…that would suggest that over the next two…years, that there’s any kind of significant collapse or dramatic change. We do think it’s going to decline. We think it will be a soft gradual decline”

At the close of last week, 57 percent of the S&P 500 companies reported quarterly earnings, which means we have more than 40 percent to go. We’d note that those companies reporting upside surprises, such as health care and information technology, are ones that have our Aging of the Population and Connected Society investing tailwinds at their back. In particular, semiconductors — or was we call them the new fabric of our increasingly connected lives — was the revenue growth standout and we saw that reflected in the better than 5 percent move for SPDR S&P Semiconductor (XSD) ETF over the last month.

As we get the remaining earnings results from that 40 plus percent of S&P 500 companies, we’ll be matching it up against current expectations for the back half of the year. As we write this, those expectations call for

Not to be Debbie Downer, while we continue to see pronounced thematic tailwinds blowing for companies on our Tematica Select List, we continue to question how those 500 companies will meet earnings growth expectations given the current backdrop? That brings us to the week ahead . . .

We’ve got more than 1,200 companies reporting quarterly earnings this week, making it the high water mark for such activity this time around. Among those will be 133 S&P 500 companies (including two Dow 30 components). As we tend to do, we’ve shared the key earnings reports we’ll be watching and pouring over from a thematic perspective this week. While we’re not traders, but rather active investors, that means collecting data and assessing it via our thematic lens, and this week should be chock full of data.

Also on the heels of the first official reading for 2Q 2017 GDP, we’ll close the books on the first month of 3Q 2017 this week – the month of July. It means that as we head into the dog days of summer, and before too long back to school, we’ll get the usual start of the month economic data as well as some data remnants for July. As part of our Cash-Strapped Consumer investing theme, we’ll be breaking down the July Personal Income & Spending report, while for our Rise & Fall of the Middle-Class investment theme it means we will be dissecting July auto & truck sales data. We’ve seen growing inventories on dealer lots and greater use of incentives, but thus far those efforts have been less than successful in overcoming rising consumer debt levels.

With the Fed’s expected no-action at last week’s July monetary policy meeting, the focus will shift back to data watching as the Fed looks to “assess realized and expected economic conditions relative to its objectives of maximum employment and 2 percent inflation.” Candidly, the data we’ve been getting has been anything but supportive of the next interest rate hike move, which explains why the timetable has continued to slip. Per the Fed Rate Monitor Tool, the Fed meeting with the highest probability of ending in a rate hike is March 2018, and it stands at a whopping 39 percent.

We here at Tematica see a bigger hurdle to get through before the next Fed rate hike, namely the normalizing of the Fed’s balance sheet. Plain and simple, this unwinding of the Fed’s QE efforts is something we’ve never seen before. While the Fed is signaling what is to come, as Tematica’s Chief Macro Strategist Lenore Hawkins recently said on an episode of the Cocktail Investing Podcast, it’s likely to be like a cat wearing silk slippers while ice skating – meaning it could be all over the place and not what was expected.

With that hurdle ahead of us, which is slated to begin as soon as September, there is a good chance that once again September could be one of the worst months of the calendar year for the stock market. According to the “Stock Trader’s Almanac,” on average, September is the month when the stock market’s three leading indexes usually perform the poorest. Since 1950, the month of September has seen an average decline in the Dow Jones Industrial Average of 1.1 percent, while the S&P 500 has averaged a 0.7 percent during the month. Looking at the Nasdaq Composite Index, which was established in 1971 it too has fallen during September averaging a 1 percent decline.

Some might say, “but those are averages” and while that is true, with market valuations extended, Washington filled with even more uncertainty after last week, reports of North Korea inching along on its weapons progress and uncharted territory for the Fed, as we head into a seasonally weak time of year for the stock market, we see uncertainty taking investor mindshare over the coming weeks. It could lead to some additional upside in the overall market, but more likely, we see it range bound with more downside risk than upside surprise to be had.

As we continue to assess and reassess the underlying economic foundation and juxtapose thematic data points, the glass half full view is any pullback in the market in the coming weeks will take the current froth out of the market and allow investors to buy stocks and ETFs at better prices. The end of 2017 isn’t too far away and much like you, we shake our heads as we say that given we are only about to enter August, but from our experience, it pays to be looking forward.

Thematic Earnings on Tap this Week

Fattening of the Population

Rise & Fall of the Middle Class