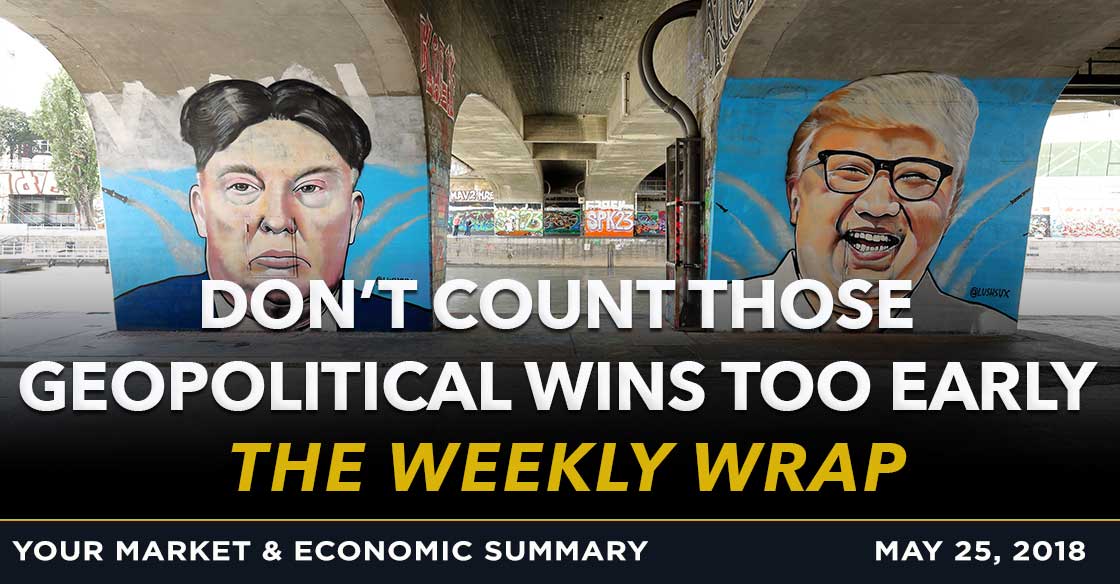 This week the markets lost the vigor from last week as investors learned to not only to count on those geopolitical wins too early in the game but to expect the negotiation flip-flopping to continue, bringing uncertainty along for the ride.

Monday the markets were in a jovial mood after the weekend’s indications that the trade war between the US and China had been given a stay of execution, though as of Monday’s close, it remained to be seen if Treasury Secretary Mnuchin’s declaration of a cease-fire would get the support of the rest of the administration. That trade relief mood led the S&P 500 to gain over 0.7% and the Russell 2000 gained 1.3% on the day.

Tuesday things took a decided turn for the worst as once again, in this era of instant news and policy by tweet, the stories of China and the US resolving the trade dispute around Chinese company ZTE Corp, (who had previously been fined $1.2 billion under the Obama administration and was banned from sourcing chips and other parts from the US for 7 years) were more rumor than fact.  On top of that, the Senate Banking Committee passed an amendment by 23 to 2 to limit the president’s ability to remove sanctions on Chinese telecom companies – we talked about this and much more on this week’s Cocktail Investing Podcast. I’m thinking some senators might have voted themselves off a certain someone’s Christmas card list. As for that meeting with North Korea, by the latter part of the week, it was off the table too, but by this morning Trump shared the two are once again talking and the June 12 summit could be a go.

Not to be outdone in this era of political instability, Italian politics have proved to once again be a fantastic source of reality TV style drama. Giuseppe Conte, a little-known attorney and law professor, who was nominated by Luigi Di Maio of the Five-Star Movement and the League’s Matteo Salvini to be Italy’s next prime minister saw his chances take a serious blow as it appears his 12-page curriculum vitae may be a tad overstated. In it, he claims to have studied at some of the world’s most prestigious universities, including New York University, which have since stated they have no record of his attendance. Another report from an Italian journalist based in Germany found that Conte’s claim to have studied law at the International Kultur Institute in Vienna in 1993 seems unlikely given it is a language school. In the end, it turns out Italian President Sergio Mattarella was just fine with the creative license and approved the populist candidate’s nominee.

Aside from the entertainment value, why should investors care about this circus?

Italy is a critical member of the European Union. Its economy is 10-times the size of Greece’s – it matters. Its public debt is the largest in the eurozone at €2.3 trillion and the fourth largest in the world. Non-residents held nearly €700 billion of Italian government bonds at the end of last year and the Italian central bank owes the Bundesbank €443 billion. The bottom line is this — Italy’s debt makes it at once too big to fail and in reality, too big to save.

Italy’s economic growth since the eurozone was launched has been weaker than that of Greece and the Italians are more than a little angry that the rest of the major European powers have no interest in being involved in Italy’s immigration crisis. Pick up a map and you’ll get a feel for just how bad it is in the nation. Italy’s unemployment rate stands at 11%, compared to Germany’s at 3.4%and France’s at 9.2%. The youth unemployment rate is a shocking 31.7%, which is a serious headwind to the country’s future. This is a nation in desperate need of massive reform in which voters are becoming increasingly angry over the continual broken promises from everyone they elect.

Many Italians blame the European union for their suffering and they now have two parties with wildly differing ideology in some sort of bizarre union with a prime minister who has absolutely no experience or qualifications that would indicate he just may be up to this monumental challenge. This is a crisis on low heat on the back burner, but one that could flash to a boiling point, thus warranting our continual monitoring. We’ll be pulling the curtain back on this more with next week’s Episode 63 of the Cocktail Investing Podcast, but in our view, the iShares MSCI Italy Capped ETF shares, which are now down nearly 11% from its January highs, aptly reflect these concerns.

By Thursday’s close, the major indices were mostly flat for the week. The S&P had gained 0.6%, the Russell 2000 0.1%, the Nasdaq 1.0% and the Russell 1000 0.5% from the prior Friday’s close. The best performing sector over the prior 5 days has been Utilities, with the Utilities elect Sector SPDR ETF gaining 2.6%. The weakest sector has been energy, falling 2.0%.

Last week we mentioned rising freight costs could become a material headwind for margins and that we would be keeping an eye on this sector. Monday the monthly report by Cass Freight revealed that the overall slowing we’ve seen internationally is occurring domestically as well. The report found that shipments, seasonally adjusted three-month over prior three-month annualized, have slowed from a more than 20% growth rate to around 10%. Pricing has also fallen. Linehaul prices were rising around 12% early in the year but are now down to up roughly 6% on an annualized basis. So far shipping data remains strong on an absolute basis, but directionally we see material signs of slowing.

On the positive side, the Kansas City Fed Manufacturing Index surprised to the upside, joining the other factory surveys that have recently delivered positive surprises. The composite index rose to the highest reading in the history of the survey. Putting all five manufacturing surveys together, we should see a solid upturn in the ISM Manufacturing PMI this month. Digging into the details though, the KC Fed report indicated that there are rising concerns of higher costs and a meager pool of available labor which means margin compression in the future. That echoes similar comments from other reports we’ve received over the last several weeks.

New home sales were weak in April, rising just 1.5% month-over-month at a 662k annual rate, versus 672k annual rate in March, which was also revised down from a prior 694k pace. Digging into the detail, things look grim. Sales of completed homes fell 15% to 210k units, which is the slowest since August 2017. Sales of homes that are currently under construction fell 5.3% to a four-month low of 231k. For all the talk of home prices, the median new home price declined 6.9% month-over-month, the steepest decline since May 2016 and the fourth decline in the prior five months. The year-over-year price increase has slowed from 10.5% in February to 4.3% in March to 0.4% as of April and the share of homes priced below $300k rose to a thirteen-month high of 47% from 41% in March.

Existing home sales fell 2.5% during the month of April and are now 1.4% below the level from this time last year. This is likely impacted by the fact that 30-year mortgage rates have risen to their highest level since September 2013 and have been on the rise for seven consecutive months amidst home prices that are up 5.3% year-over-year, grossly outpacing income growth. Which leads us to Residential mortgage lending, which was rising at 4.6% annual rate toward the end of the first quarter but over the last four weeks has declined at a 5.4% annual rate.

Once again, the data does not sync with the narrative of an accelerating economy. Over the past four week, US commercial bank lending growth to businesses and households slowed to a 1.8% annual rate from over 7% at the end of March. Commercial and Industrial lending growth has slowed to 2.6% annual rate from the 17.4% pace at the end of March while consumer auto loans have actually contracted 2.3% over the past four weeks and consumer credit card balances are rising at a 3% annual rate.

Reports from the retail sector didn’t exactly point to a consumer whose wallet is full. Walmart (WMT) reported this week that its online sales in the US rose 33.0% during its most recent quarter, compared to just 23% in the prior quarter but below the over 50% growth it enjoyed in online during each of last year’s quarters. Total revenue and adjusted EPS both beat analyst estimates. On the other end of the spectrum, store traffic in the US rose a meager 0.8%, the weakest rate in over a year. J.C. Penny (JCP) reported disappointing same-store sales and cut its full-year guidance – same for Target (TGT), Lowe’s (LOW) and Home Depot (HD). Perhaps this is in part due to the reality that even though consumer sentiment is high, according to the Federal Reserve Report on the Economic Well-Being of U.S. Households in 2017, 40% of adults would not be able to cover an unexpected $400 expense, this at a time when the unemployment rate is 3.9%. Despite having no appreciable savings, 74% of adults reported that they were either doing okay or living comfortably in 2017. That noise you hear all of us here at team Tematica scratching our heads as we digest the implications of that.

The bottom line for the week is that while manufacturing has been strong, the lack of available talent in the labor pool and rising transportation costs are a headwind to margins. Despite an exceptionally low unemployment rate, most adults have little in the way of savings, which means when we do hit those economic bumps in the road, most don’t have a safety net upon which they can rely. Consumers may report feeling pretty good, but their piggy banks aren’t sharing their enthusiasm.

Next week we have a shortened trading week thanks to Memorial Day holiday on Monday. During the week we’ll be looking for the S&P Corelogic Case-Shiller Home Price Index, Consumer Confidence, The Dallas Fed Manufacturing Survey, Retail and Wholesale Inventories, Personal Income and Outlays, the PMI Manufacturing Index and the ISM Manufacturing Index. We’ll also be keeping an eye out on all those geopolitical dramas.

Have a great week!