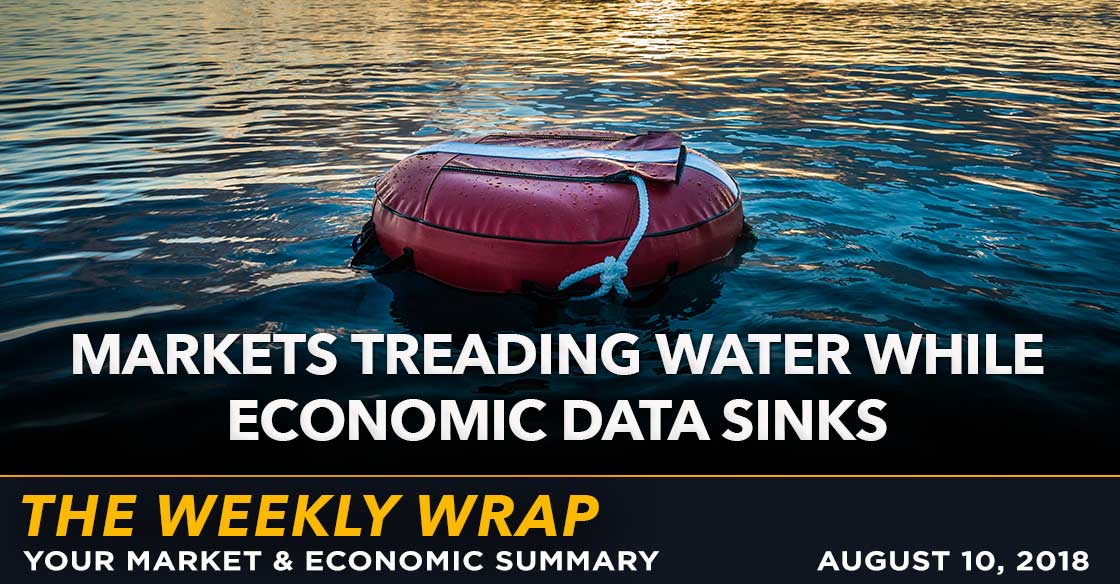 Monday, the markets were unsurprisingly quiet. With the bulk of earnings season in the rearview mirror, save for a few remaining big names, the summer doldrums and vacations led to the day having the third lowest trading volume of the year at just 2.6 billion shares, compared to the 3.5 billion daily average for all of 2018. The Nasdaq managed to hold onto its second-highest close in history, less than 1% away from its all-time closing high thanks to a 4.5% jump in Facebook (FB) shares on the news that the company is looking to work with banks to help facilitate transactions on its platform – while this meshes with our expanding Digital Lifestyle investment theme, it also cues up the nerves of having one’s social media presence now linked to one’s financials.

Tuesday, the market news was dominated by a tweet from Elon Musk concerning taking Telsa (TSLA) private at $420 a share. Yep, the CEO of a publicly traded company announced that he was mulling taking the company private at a specific share price and that funding was already locked up. First, I’m pretty sure that Twitter’s (TWTR) Sales Department regularly sends fruit baskets to Elon and Trump. Second, Tesla’s Investor Relations department and Corporate Council must have Xanax dispensers on their desks. 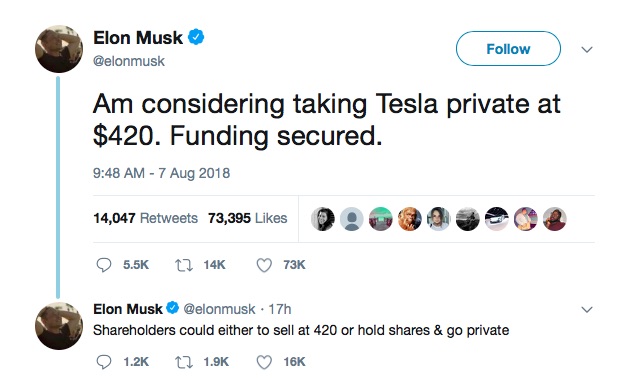 Shares were already on the move for the day after news that Saudi Arabia’s sovereign wealth fund had taken a $2 billion stake in the company, according to the Financial Times. The major news outlets all scrambled to get some clarification from Tesla’s Investor Relations department, who could only confirm that the tweets did in fact originate from Elon Musk himself.

Trading of shares of Tesla was halted until 3:45ET, during which time a Tesla blog post was released containing Elon’s email to employees in which he shared that, “”A final decision has not yet been made, but the reason for doing this is all about creating the environment for Tesla to operate best.” In his letter Elon Musk claimed that the wild swings in the share price “can be a major distraction,” the quarterly earnings cycle making the focus on the short-term rather than what is in the company’s long-term best interest and that the company is the target of short sellers. While true, I would raise the counter point that perhaps a CEO should not be so focused on the share price and instead focus on the long-term strategy driving the business.

It remains to be seen if any of the short-sellers that he mentioned decide to go after Elon for damages or if the SEC will find him guilty of attempting to manipulate the share price. Former SEC Chairman Harvey Pitt told CNBC that, “the use of a specific price for a potential going private transaction is highly unprecedented and therefore raises significant questions about what his intent was. So, that would have to be investigated.”

The fallout around Elon’s tweets have, I’m sure much to the chagrin of the 49ers new quarterback, replaced Mr. Garoppolo, (at least temporarily) with @matt_peach1 as the top candidate for the next Mr. Hawkins. 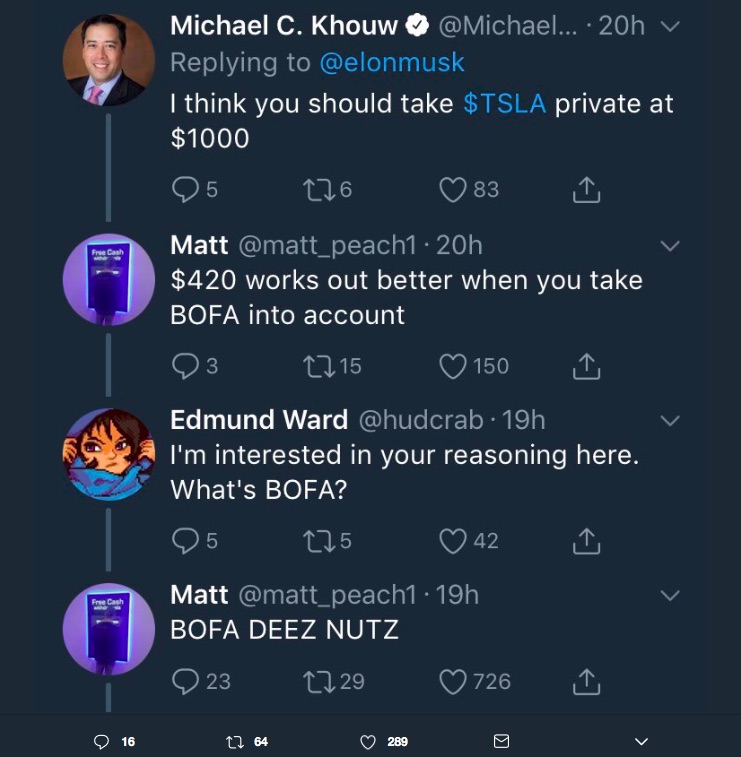 Who says the markets gets boring in August?

By Wednesday the Wall Street Journal had reported that the Securities and Exchange Commission had already made inquiries into the veracity of Elon’s tweets. The company had not revealed the source of the some $71 billion needed to take the company private at that share price. I’m starting to think Twitter needs a McDonald’s (MCD) coffee style warning,

“Caution – Tweets may be read by the public and you may be held responsible for what you tweet.”

Wednesday, the S&P 500 started the day just 14 points away from its all-time high, but couldn’t quite break through that level during another day in which trading volume was well below the average for the year. The index had closed higher four consecutive days, but Wednesday it closed basically flat, falling -0.03%.

Thursday, the major market indices all closed very slightly in the red as the S&P 500 continues to be unable to revisit it’s January 26th high. As of Thursday’s close the S&P sat 0.7% below that day’s high, the Nasdaq 5.1% above, the Dow Jones Industrial Average 4.2% below and the NYSE Composite Index -5.0% below. Any share price gains Tesla had enjoyed from the week’s leaks and tweets disappeared by Thursday’s close and reportedly the SEC is kicking its investigation into high gear. If Elon’s assertion that funding was already secured turns out to be inaccurate, it is going to be a very challenging time for Mr. Musk and his board. It isn’t as if the transaction would be a minor one. 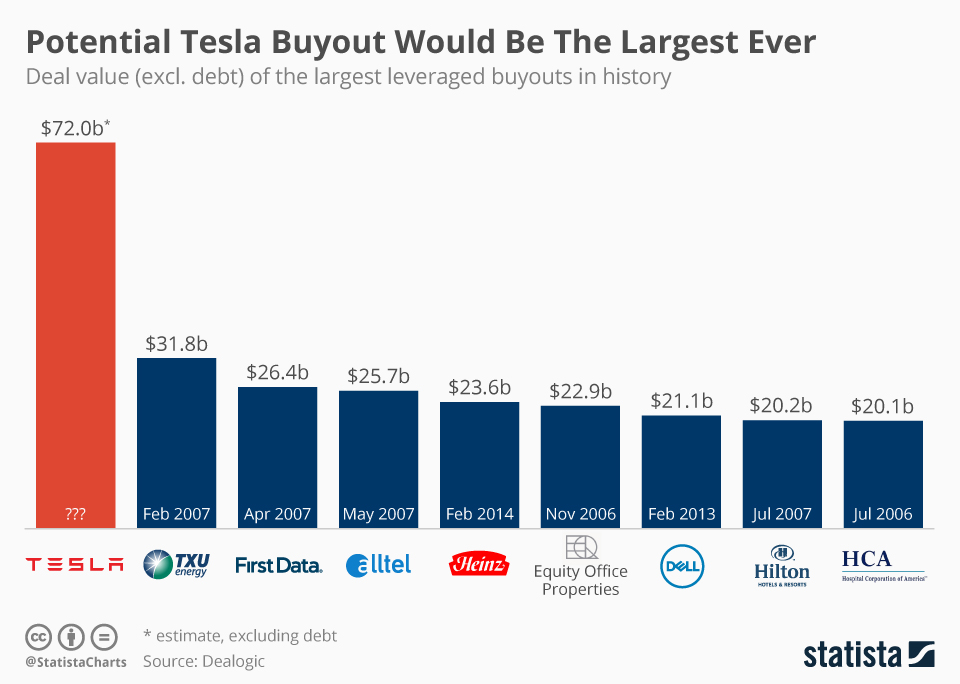 On August 22nd, this will officially become the longest bull market in history – something very few would have anticipated back in the depths of the financial crisis. The current record holder ended with the dotcom bust. Speaking of which, this market has a few things in common with that one, such as the valuation with the S&P 500 market cap weighted price-to-sales ratio about equal to that at the height of the dotcom boom and the median price-to-sales materially outpacing the previous heights. 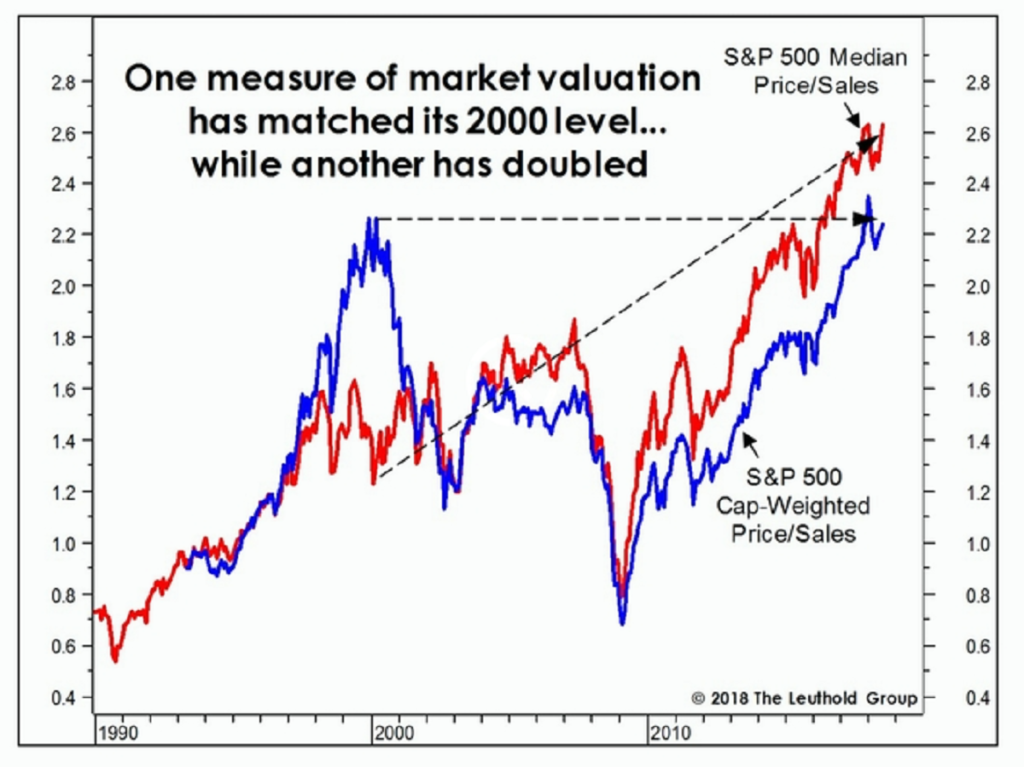 It isn’t just valuation that is reaching to the stars. The S&P 500 has also outperformed the rest of the world to a rather profound degree, which is clearly evident in the following chart which shows the performance of the SPDR S&P 500 ETF (SPY) against the Vanguard FTSE All-World ex-US ETF (VEU). 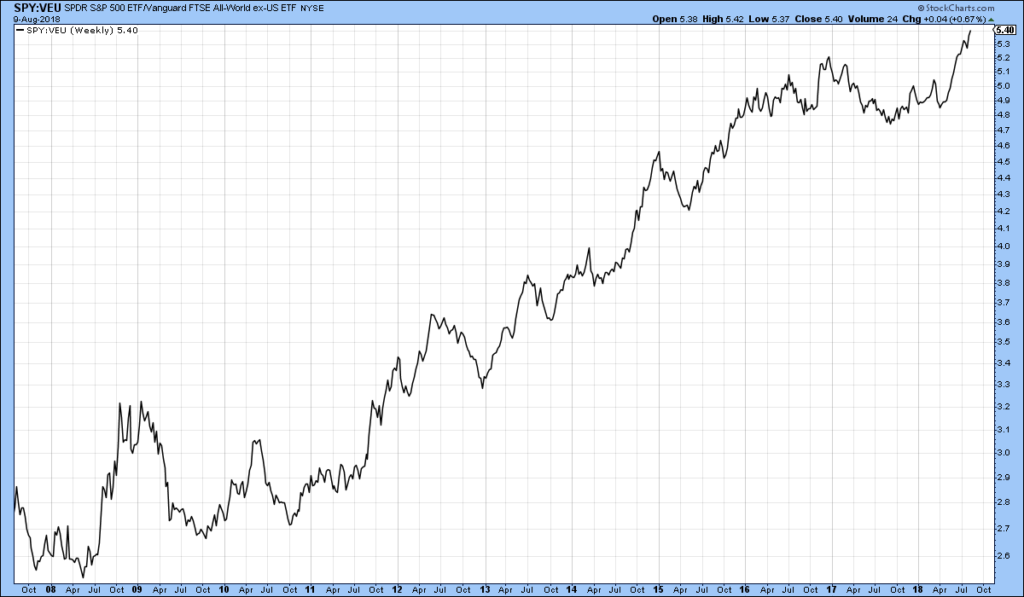 So far, all nine economic major indicators in August (including payrolls, manufacturing and non-manufacturing ISM, construction spending, auto sales, consumer credit) have come in below expectations. Wholesale Trade Sales took a one-two punch with May being revised down to +2.1% gain from +2.5% previously and June came in at a -0.1% decline versus expectations for a +0.2% gain.

Yes, but you ask, “What about the 80% of companies that have beaten their profit estimates this earnings season?”

Glad you asked. First off, the denominator for EPS keeps getting more supportive for growth. Cut the number of shares outstanding and it gets a lot easier to show a rapidly rising EPS. For those let mathematically inclined –

The growth in share buybacks have grown at 3x the pace of capex growth according to data from Goldman Sachs.

Call me crazy, but that says an awful lot about what those in the C suite think will do the most for share prices. If we want to be cynical, execs may be choosing to inflate share price in the more near-term to boost their own compensation, (when tied to EPS growth) while reducing potential growth for longer-term shareholders. The other alternative is that execs see this as truly the best use of corporate capital, which means a much less optimistic view of the opportunities presented by the domestic and/or global economy.

One other item to consider when reviewing this quarter’s performance is the “base” effect of last year’s June quarter which declined at a 6.4% annual rate. The June quarter usually sees positive growth, so last year’s decline has helped to make this year’s results look particularly good on a year-over-year basis since the prior year was so comparatively weak.

Let’s not forget to thank the lowered tax rate as well, which will not continue to improve the growth in EPS in the coming years. The impact of this cut has been profound.

The 10% difference between after-tax and pre-tax profits is the smallest as far back as the data goes, all the way back to Q1 1947. To be clear, I’m not a fan of higher taxes as I think history has shown that the private sector generates more value for the economy than the public sector, but one cannot ignore the large one-off impact of the tax cut here.

While the Federal Reserve is tightening, lending standards at most US commercial banks have been loosening. Demand for loans has been tepid at best in recent years, but we have seen demand from smaller firms start to increase recently. We are seeing the inverse when it comes to the consumer with lending standards for credit card borrowers tightening as the default rate rises – standards are now the strictest since 2009. This week we learned that in July, revolving consumer loans outstanding contracted, (a rare event) by $185 million with the broader trend slowing down noticeably.

Employment Picture Not So Rosy

Digging into last week’s employment report, we’ve seen the biggest increases in employment in the retail and manufacturing sectors in 2018 versus the same period in 2017. Drilling down a bit further, that report wasn’t quite a rosy as the headlines would have indicated. The number of unincorporated self-employed rose nearly 200k in July after rising 177k in June. Not what you’d expect with a super tight job market? The percent of those employed holding down multiple jobs rose from 4.8% in May to 4.9% in June to 5.2% in July – a 16 month high. People tend to take on a second job when they are struggling, not when things are peachy keen. If we take inflation into account, weekly earnings actually contracted in July and the workweek declined 0.2%.

This week’s JOLTS (Job Opening and Labor Turnover Survey) showed that Job Openings rose 3k in June compared to the 181k decline in May with 6.662 million open positions versus expectations for 6.625 million. New hires fell 96k and are now down in 3 out of the past 5 months. The rate of voluntary quits was unchanged at 2.3%, which is tied for the highest since April 2001, when it reached 2.4%. The number of job openings remains greater than the number of unemployed – talk about a headwind to the growth of the economy! If companies hired every single person who was looking for work, regardless of the job requirements/skills match, there would still be positions that remained unfilled.

The headline Producer Price Index (PPI) was flat between June and July while the core PPI (excluding food and energy) rose +0.3% from June versus expectations for a +0.2% gain in the headline and +0.3% in the core. Year-over-year headline rose +3.3% which is consistent with what we’ve been hearing from many companies concerning input costs during this earnings season. We’ll see today (Friday) if companies are able to push those cost increases along to the consumer when the Consumer Price Index is released.

The attempt by value stocks to take the lead from growth stocks was short-lived and we are back to the momentum is your friend trend. The economic data for the week points to an economy that is not as robust as the headlines would indicate once you look into the details. Despite all the talk of a bull market, the major indices, outside of the Nasdaq, have failed to recapture their January highs. Overall the markets were pretty quiet outside of the Tesla excitement.

Next week we’ll get a look at the National Association of Independent Business’s monthly index for insight into the goings on with small businesses and their outlook. We’ll get July’s retail sales numbers, second quarter productivity, July’s Industrial Production and Capacity Utilization as well as June’s Business Inventories. We’ll get more on the beleaguered housing sector with Housing Starts and Home Builder’s Index.

** Going forward the Weekly Wrap will be completed as of Thursday’s market close.