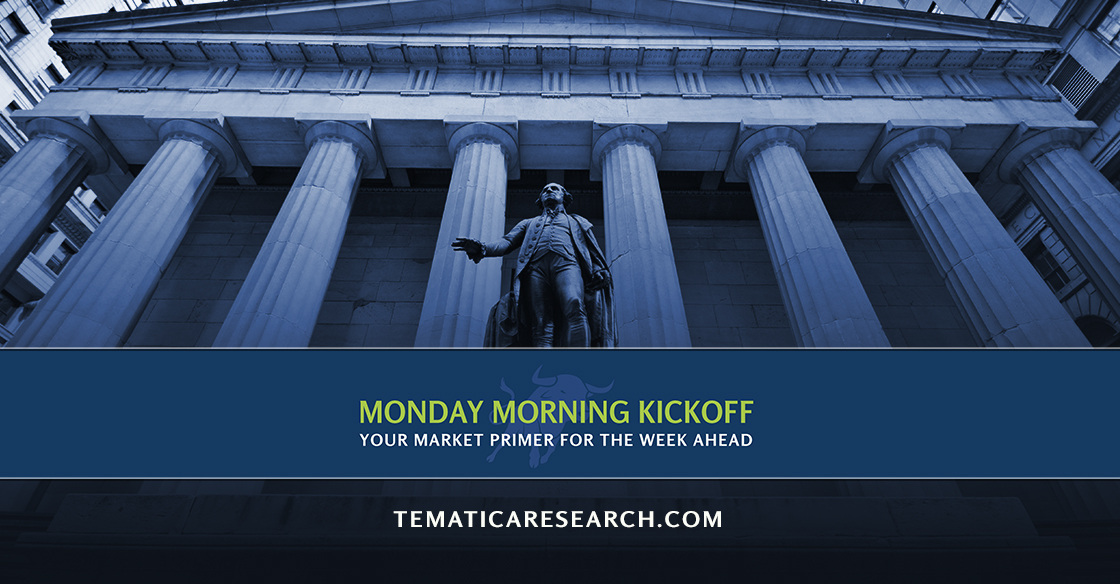 As we called out in last week’s Monday Morning Kickoff, the ensuing week was one of the busiest we’ve seen in some time given the velocity of corporate earnings, the start of the month economic data, the Fed’s May FOMC meeting and the now what can only be called the usual “unusual” happenings in Washington. All of that even before we yesterday’s French elections and the latest pertaining to the oil markets, which saw oil prices fall to the lowest level since before the OPEC-led production cuts last week. Quite the fire hose to be drinking from.

As we enter what will hopefully be a slower week at least from a data point of view, today we’ll break it all down and decipher what it means for the stock market, so keep reading . . . we wouldn’t want to spoil it up front, but don’t worry we’re not going to make you sift through the end credits for the answer like we hear is the case with Marvel’s Guardians of the Galaxy 2.

So far, more than 2,000 companies reported over the last 10 market days, bringing the total number of S&P 500 companies to just over 80%. In the coming weeks, we’ll get start to hear from retailers and others that have an April quarter end. Based on what we’ve seen from that 80 percent, which in our view is a meaningful sample, 75 percent beat the mean EPS estimate and 66 percent of S&P 500 companies have beat the mean sales estimate. That beat is being led primarily by two areas — Energy and Consumer Discretionary, to use the typical Wall Street lingo.

The rebound in Energy earnings should come as no major surprise, given the year over year rise in oil prices. The rebound in Consumer Discretionary, however, is somewhat surprising given the tepid Retail Sales data we’ve seen over the last several months. We suspect that as more retailers report earnings in the coming weeks (most tend to have an end of January year-end to account for year-end holiday sales, which means most just closed their books on the first quarter of 2017 at the end of April), we’re likely to get a somewhat different view on consumer discretionary spending. Even though 1Q 2017 earnings have come in a bit better than expected, we continue to see a downward move in expectations for the current quarter, and there is a high probability those soon to be had retail earnings could put a further crimp in 2Q 2017 expectations.

The not so good news is for the current quarter, 58 S&P 500 companies have issued negative EPS guidance vs. 25 that have issued positive EPS guidance, and we’ve continued to see expectations for the current quarter trickle lower. Even as that has happened, the S&P 500 closed last week at a new high following a better than expected April Employment Report (more on that in a bit) and a rebound in oil stocks that followed comments by Saudi Arabia indicating that Russia is ready to join OPEC in extending supply cuts. With oil prices falling back to pre-OPEC led production cuts last week, we’d argue OPEC’s initiative has thus far been a major disappointment, thwarted by production from countries that have not agreed to the cut, including the US. Here’s the thing, we continue to see the US rig count climb, while more data points to a continued sluggish US economy.

That sounds like a great set up to review last week’s sea of economic data . . .

After leafing through all that data folks, hang onto your hats as we share the two disposing views on what all this means for the current quarter from the Atlanta Fed and the New York Fed.

Last week the Atlanta Fed trimmed its GDP Now reading for the current quarter to 4.2 percent from the prior 4.3 percent. We too are shaking our heads at this, wondering exactly how the Atlanta Fed derived a 4.3 percent forecast given the disappointing 0.7 percent GDP reading of 1Q 2017.

We find the forecast adjustment by the New York Fed’s Nowcast, which revised its 2Q 2017 GDP reading to 1.8 percent from the prior 2.3 percent far more in tune with the above data.

Both call for a rebound in the domestic economy, which we would love to see of course. There is that little voice, however, in our collective Tematica heads whispering that we need to see more data before getting comfortable even with the New York Fed’s 1.8 percent forecast. Remember, both institutions started off with lofty expectations for 1Q 2017 GDP and both revised them sharply lower during February, March and April as the data rolled in.

That’s one of the reasons why we remain skeptical of the stock market and it’s current (and stretched) valuation of more than 18x forward earnings. As we see it, against a growing backdrop of data that is having economist trim growth expectations, it isn’t showing that the economy is, or is about to fall off a cliff. In other words, not so bad news is good news and that lifted the market higher. That same little voice in our heads keeps wondering what the pin prick moment will be that lets some of the air out of the market? We’ll continue to ask that question, especially if the market grinds even higher in the coming days and puts even more of the institutional investing community in a “stocks are too expensive” stance.

Quickly touching on the Fed, we were not surprised by the lack of action exiting the May FOMC meeting, in fact, we were rather counting on it. As we said in last week’s Monday Morning Kickoff, we are once again in a Ground Hog day pattern with the Fed given the data. While the argument the April Employment Report can give the Fed the fire power to raise rates come its June meeting, we have to question if the Fed will have sufficient data to call an improving economy in just a few weeks time. The risk is the Fed slows the economy even further, perhaps more than it expects and this is something it has been known to do.

Remember, all that consumer debt that is outstanding and the rising rates of auto and student loan delinquencies and default rates? In case you missed it, in reviewing Capital One Financial Corp.’s (COF) 1Q 2017 results we noticed a much higher rate of loss than its management or investors were expecting as it reported a write-off rate of 5.1 percent, its highest level since 2011. How did Capital One explain the weakness? Consumer behavior as well as concern that consumers have run up higher debt levels of late than they have since the recent recession.

Capital One was not alone. Synchrony Financial (SYF) also upped its 2017 guidance for net charge-offs saying on its earnings call that it now expects full-year 2017 charge-offs at or slightly above 5 percent. That is up from its previous outlook in the 4.75 percent to 5 percent range, which it shared when it reported is December quarter results in January.

This is also where we remind readers that consumer spending is directly or indirectly responsible for two-thirds of the domestic economy. As we see it, the rise of the Cash-strapped Consumer investment theme is a heavy headwind for an economy, and as the coming data reflects more cash-strapped tendencies, there is probably more downside than upside to be had in those Fed GDP forecasts.

Turning to the Week Ahead

Looking ahead to next week, we have several key economic indicators that we’ll be watching including the latest JOLTS report as well as April Retail Sales. Inside the JOLTS report, we’ll be looking for confirmation on several aspects of our Aging of the Population investing theme, while coming Retail Sales data should do the same for both our Cash-strapped Consumer and Connected Society ones. We’ll also get the latest look at inflation courtesy of the April PPI and CPI — ahead of which we’d suggest readers revisit Chief Macro Strategist Lenore Hawkin’s piece on why we expect the inflation data to roll over, which it’s already started to do.

From an earnings perspective, we have another 1,000 plus companies reporting this week. Among the bunch, 44 S&P 500 companies (including 1 Dow 30 component) are scheduled to report results for the first quarter. Even though the number of companies in the key market index are on the wane this week, odds are several hundred of those companies will offer some insightful data points like the ones we mentioned above from Capital One and Synchrony.

Before we close out with the earnings reports we’ll be eyeing given our thematic perspective, be sure to check back during the week to get our latest thoughts and insights on the markets and the economy. Here we go…