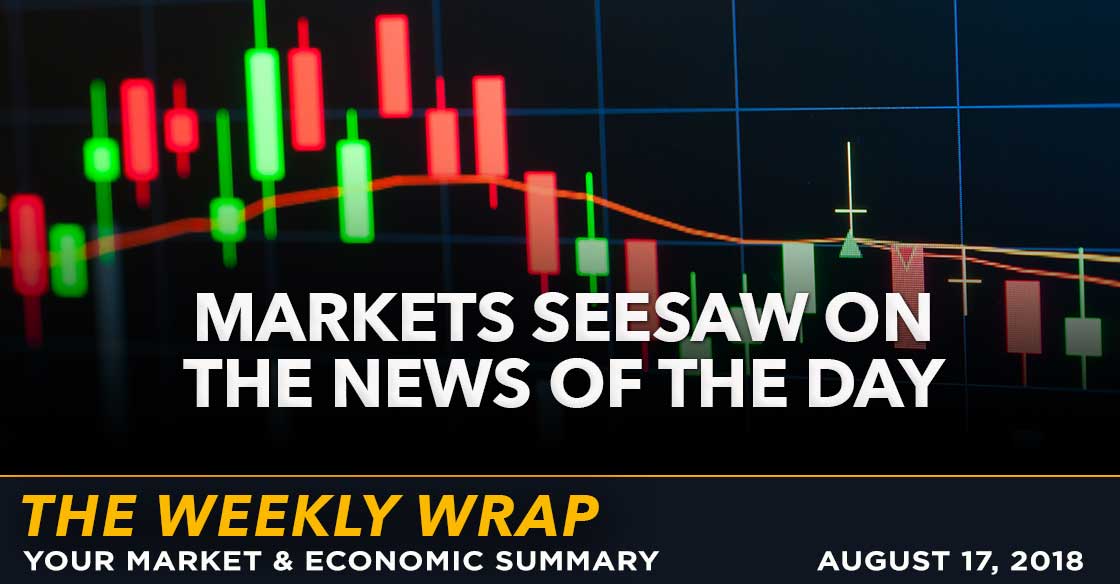 The shift towards macro continues in the markets, while the record levels of corporate buybacks creates a major buyer for stocks.

Monday, the Dow Jones Industrial Average and the S&P 500 both experienced their fourth consecutive close in the red as the Turkish Lira hit a record low after having dropped more than 20% the prior Friday. Fears over the crisis in Turkey led to declines in emerging market shares with the iShares MSCI Emerging Market ETF (EEM) falling 1.6% for the day and 18.4% from its 52-week high. The Turkish lire dropped another 6.6% on the day and is now down 29% in August. Last week I mentioned the outperformance of the S&P 500 index versus the rest of the world, as of Monday, the S&P 500 was still up 6% in 2018 versus the 5.8% decline for the rest of the world (MSCI World Index excluding the US), which Bloomberg pointed out, is the biggest divergence in four  years.

Tuesday was much more upbeat with 425 of the companies in the S&P 500 closing in the day in positive territory. That upbeat tone didn’t last as Wednesday the S&P 500 had its worst day since late June, falling -0.8% and the Nasdaq Composite fell -1.2%. Retail sales may have been solid as was Macy’s (M) quarterly results yet shares fell 16% on numbers that beat and raised guidance, leaving it the worst performing US stock on Wednesday and marking the stock’s third worst day ever. To be fair, expectations had gotten way too high (how many times have you heard us say that!?) as shares were up 66% this year prior to today’s results. The positive retail numbers from July did nothing to help Nordstrom (JWN), Kohl’s (KSS) or J.C. Penny (JCP), which fell -5.5%, -5.8% and -8.7% respectively Wednesday. It’s been a rough time for many retailers. Even the omnipresent Kim Kardashian West recently announced the closing of the DASH stores, (oh the horror) and the President’s daughter closed down her Ivanka Trump brand.

Tencent (TCEHY), China’s online advertising and gaming giant, saw its shares take a nearly 4% hit as it reported its first quarterly profit decline in over 10 years with profits down 2% on a revenue increase of 30%. Shares of the company, which represents 4.9% of the iShares MSCI Emerging Market ETF (EEM), have lost 17% in 2018. That’s a warning sign that all is not so great over in China, which given the size of its economy, matters to investors.

Shares of Walmart Inc (WMT) closed up 9.3% Thursday after reporting a quarter that was a total success. I spoke with Neil Cavuto of Fox News, USB Senior VP Of Investments Jim Lacamp and Chris Bedford of the Daily Caller News Foundation on Thursday about Walmart’s results and what is says about the strength of the consumer in light of the lack of wage growth and  the ongoing trade war in the context of the upcoming mid-term elections which you can watch here, according to Neil we all brought our “A” game – must have been that 4th cup of coffee!

Thursday, the overall markets rebounded strongly with the S&P 500 closing up +0.8%, the Nasdaq up +0.4%, the Dow Jones Industrial Average up +1.6% (it’s best day since early April) and the NYSE Composite up +0.9%, driven in no small part by the news that China and the US are heading back to the negotiating table over tariffs. A total of 437 of the companies in the S&P 500 gained ground on the day. That leaves the S&P, Nasdaq, Dow and NYSE Composite down -0.5%, down -1.1%, up +0.2% and down -0.9% respectively over the past five days. All but the Nasdaq remain below the January 26th highs and the NYSE Composite, the broadest and weakest of the group, down -5.8% since then.

While weekly earnings failed to impress, retail sales for July did. US retail sales were stronger than expected in July rising +0.5%, versus expectations for +0.15, but June was revised lower to a +0.2% gain versus the previous estimate of +0.5%. Excluding auto, gas, building materials & food services, (core) retail sales rose +0.5% as well but June was revised to a dip of -0.1% versus prior estimates for 0%. Online sales likely enjoyed a boost from Amazon’s “Prime Day,” and given that this is a volatile indicator, I like to look at the 3-month moving average, which has been steadily moving up since March 2018. Good news for retailers, not so great if we continue to see stagnant wages. The current pickup in spending is likely because, although real weekly wages haven’t improved, those tax cuts have left more for take-home pay. 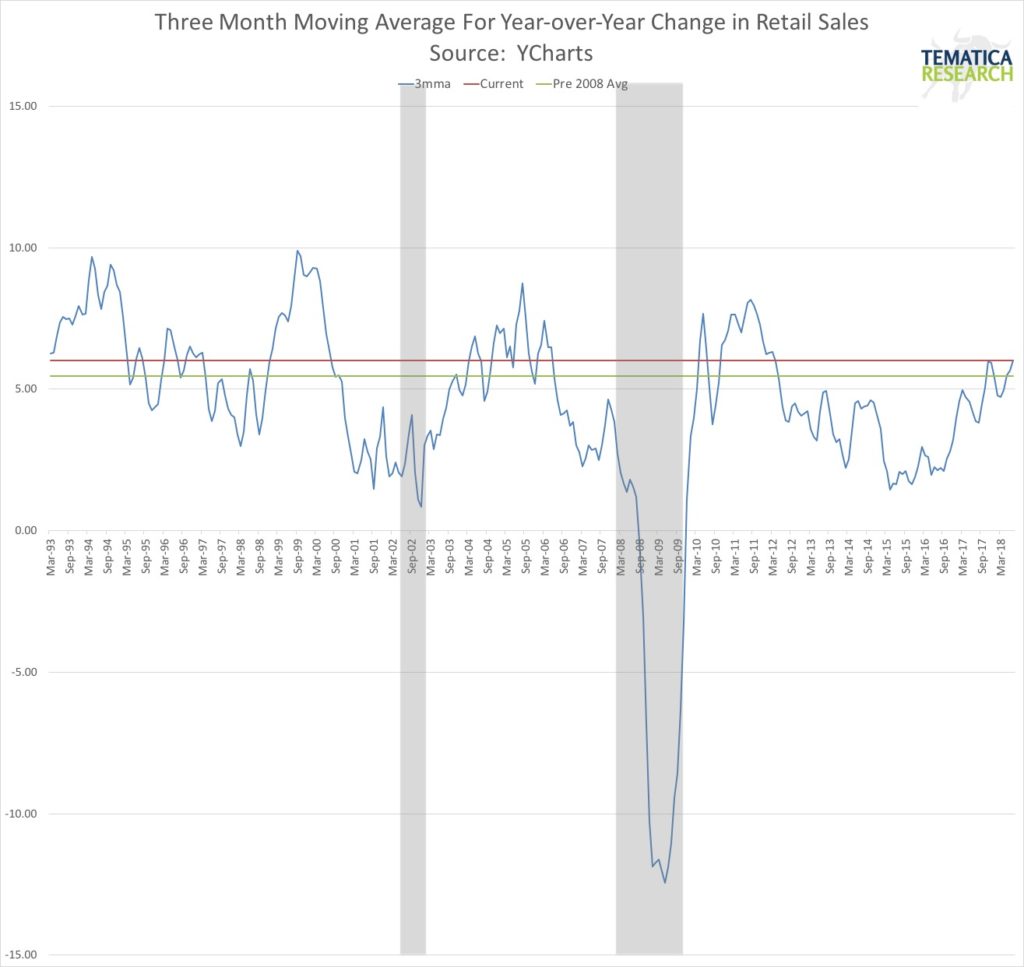 The New York Federal Reserve released its quarterly assessment of household debt this week and found that delinquencies eased across most types of consumer debt except for (shocker) student loans. This is a good sign for the health of the household. Interestingly the number of credit inquiries within the past six months is at multi-year lows, which is an indicator of weak consumer credit demand – that doesn’t jive all that much with the record levels of consumer confidence. Here sentiment isn’t aligning with behavior.

This week the NFIB (National Federation of Independent Businesses) released its Small Business Optimism index which in July rose 0.7 points to 107.9 points and is just 0.1 point away from the all-time record high of 108 reached in July 1983. Keep in mind that 60% of NFIB members are businesses with 1-5 employees, so this report is closer to consumer sentiment than other business sentiment studies. The tightness in the percent of companies with job openings they cannot fill reached yet another record high. In July, small business owners added the largest number of workers per firm, net 0.37, since 2006. Those reporting higher compensation costs also remains near the highs since the end of the recession with the Quality of Labor continuing to be the single most important problem facing the business. Overall the report was pretty rosy and that’s what made all the headlines, but (and you knew there would be a but as our job at Tematica is to always go deeper and find the risks) the Outlook for General Business Conditions which evaluates sentiment 6 months out, remains well below the November 2017 high of 48 at 35. That is still well above where it has been for much of this expansionary period, but we look for directional trends so that bears noting. The percent planning for higher prices three months out is at the highest level since the start of the recovery. Those reporting actual higher prices today versus three months prior remains near the highest level since the recovery began. Capital Expenditure plans continue to trend higher, but for context, remains below pre-recession levels.

Looking outside the US, the Eurozone economy was slightly stronger in the second quarter than initially estimated, with year-over-year GDP growth reaching 2.2% versus the prior 2.1% estimate. This improvement was driven primarily by better-than-expected growth in Germany. So that’s on the plus side, but in the rearview mirror while Eurostat reported this week that the bloc’s industrial output declined by -0.7% in June, significantly worse than the expected -0.4% decline. The loss was driven primarily by a -2.9% decline in the output of capital goods, such as machinery, which indicates that companies may be expected weaker growth in the coming quarters. Consumer and intermediate good output also declined. 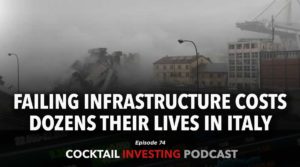 Tematica’s Lenore Hawkins gives her insights about the bridge collapse in her second home of Genoa Italy and what it means for infrastructure spending worldwide.

Italy took over the headlines as a major bridge in my adopted hometown of Genoa collapsed. The ensuing finger-pointing, denials and accusations are not exactly improving investor confidence in a nation that is already struggling with a weak banking sector and a slow-to-no-growth economy. You can read more on the details here.

Earlier this week Turkey dominated the headlines, so we’ll quickly go over the what’s and why’s.

The US doubled tariffs on Turkish steel and aluminum imports last week after having late last month placed financial sanctions on two of the nation’s ministers in response to Turkey’s detainment of American pastor Andrew Brunson for nearly two years on espionage and terrorism charges tied to an attempted coup of President Erdogan in 2016. The Turkish Lira has fallen over 50% from its 1-year highs, Turkish bond yields have hit 10+ year highs and Turkish stocks are at 10+ year lows. The big question is contagion – clearly, Turkey is in crisis, but how much does it affect those outside?

The Turkey question comes down to primarily two impacts, consumption and debt. The world is awash in debt, with global debt-to-GDP having reached 244% versus all of 210% in 2007, which was back then considered an unsustainable level. An awful lot of that debt is US Dollar denominated thanks to the Federal Reserve’s post-crisis quantitative easing policies which made US debt relatively cheap – that was the whole point. Over 50% of Turkey’s borrowing is in a foreign currency, so as its currency tumbles, that debt becomes a lot more expensive, thus a lot riskier, thus the nation finds itself in a death spiral. Since most of the debt is corporate as opposed to sovereign debt, a bailout via the IMF is unlikely. For those who argue that Turkey isn’t all that big with the 17th largest economy in the world, I’ll point out that Thailand in 1997 had the 30th largest economy yet kicked off the Asian Financial Crisis which, for those of us who were around then, was no cake walk.

According to the most recent data from the Bank of International Settlements, Spanish banks hold about $83 billion worth of Turkish debt, France $38 billion and Italy $17 billion. On top of that, banks such as Unicredit (UNCFF) and BNP Paribas (BNPQF) has significant subsidiaries in Turkey that could end up, if this death spiral continues, seriously affect the banks’ balance sheets which would negatively impact their capital ratios.

Looking at the consumption side, Turkey is the European Union’s 5th largest trading partner which Russia the EU’s 4th largest. So their pain is pain for the EU, which is also facing the impact of US tariffs. According to the European Central Bank, “If all the threatened measures were to be implemented, the average US tariff rate would rise to levels not seen in the last 50 years.” We are in unchartered territory.

The shift towards macro continues in the markets, while the record levels of corporate buybacks — up 80% this year and Goldman Sachs (GS) is predicting $1 trillion next year, —creates a major buyer for stocks. The strength of the US Dollar continues, affecting emerging markets, which some fear could eventually affect developed markets. Consumer sentiment is high and we are seeing the impact of the tax cuts, without which the take-home page for the vast majority of Americans would have actually declined over the past year.

Next week we’ll be looking for the latest meeting minutes from the Federal Reserve to gain insights into upcoming rate hikes, data on existing and new home sales, durable goods orders Markit manufacturing and services flash PMIs and listening to the outlooks presented at this year’s Jackson Hole symposium.