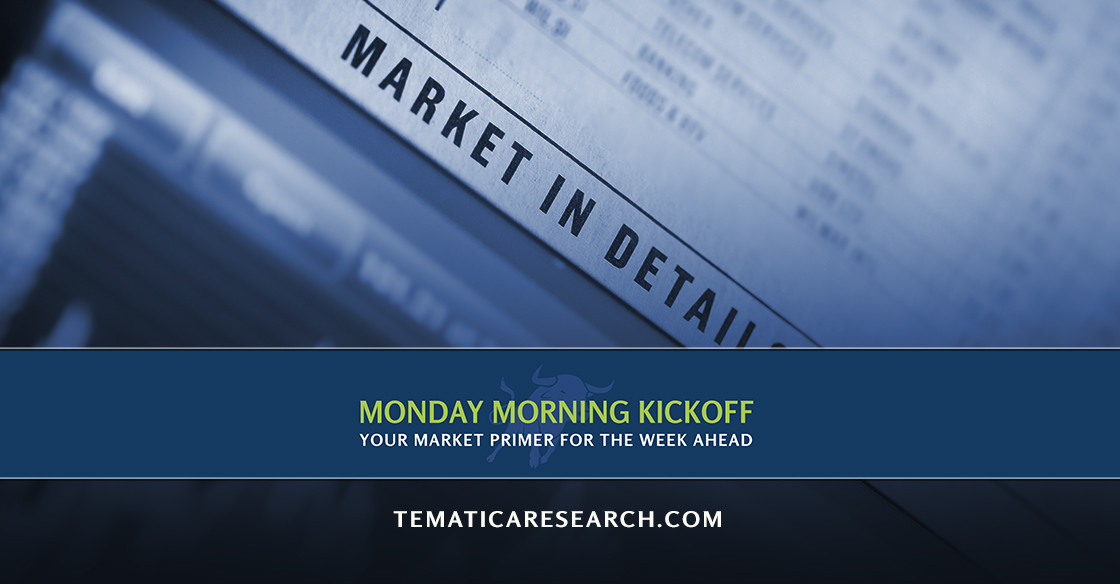 While we’re not ones to complain too vocally about the continued move higher in the markets, we are cognizant the continued melt up means the market multiple is being stretched even further. In early November, the S&P 500 was trading at 16.2x expected 2017 earnings, and as we write this, it’s trading at more than 18.5x those same earnings. The same earnings that have not been materially trimmed despite evidence of a slowing economy and the push out in the Trump agenda.

While 2Q 2017 earnings have for the most part come in well, we’d note that even with several earnings beats relative to expectations, those shares like Goldman Sachs (GS), JPMorgan Chase (JPM) and Bank of America (BAC) gave investors some indigestion. In other words, it wasn’t just Chipotle (CMG) that has people feeling a little wobbly last week. We also saw a few companies cut their outlooks, like Harley Davidson (HOG) despite delivering a positive surprise for the quarter.

This serves as a reminder that even though the headline figure may be a beat relative to expectations, we still have to dig into the internals of a company’s report. We saw that with CSX (CSX) and that revealed its revenue growth in the quarter was due far more to pricing than volume, given that only two segments delivered volume gains year over year in 2Q 2017. Piling on the lack of volume growth at CSX, trucking logistics company CH Robinson Worldwide (CHRW) shared that, “truckload volume growth has slowed from the second quarter.” Hmm… this does not signal or suggest a sharp rebound for the economy in 3Q 2017.

Over the last few weeks, we’ve been sharing our view over the pending risk of the oil patch on 2Q 2017 earnings prospects, as well as those for the back half of 2017. That view has been based on the combination of not only rising supply, which has only been exacerbated with OPEC members shunning production cuts in June and the continued increase in US rig count, but also weak demand. As a quick reminder, the expected rebound in oil earnings was the linchpin on year over year earnings growth expectations.

Joining us in throwing cold water on those rebounding expectations, General Electric (GE), which shared the “recovery in the oil and gas market has been slower and more volatile than expected” and results for this business to be “lower than previously anticipated.”

Odds are we will be hearing much more of this in the coming weeks, and it is likely to lead to those expectations revisions we’ve been discussing.

Amid those reports and a slew of others, we continued to see confirming signs for a number of our investing themes last week.

Turning to the Week Ahead

This week we will run the gauntlet when it comes to 2Q 2017 earnings reports with more than 600 on tap. As these reports roll in, we expect a multitude of data for our 17 investment themes. For a primer on those, click here. It will be fast and furious with a number of thematically positioned companies reporting this week – down below we’ve called out the key ones that we’ll be listening and digging into.

Exiting the week, we’ll have the first cut on not only how S&P 500 earnings are shaping up relative to 2Q 2017 expectations, but also an early look on how 3Q 2017 is unfolding. If these earnings and outlooks continue to come in better than expected, odds are it means the market will trade higher, stretching valuations even further. Should that happen, we could see profit taking given that 80 percent of investors believe the US is the most overvalued region for equities per the monthly fund managers survey performed by Bank of America Merrill Lynch (BAC).

On the economic data front, we’ve got a few more pieces of June housing data, including Existing Home Sales and New Home Sales as well as the May figures for the FHFA Housing Price Index and the S&P Case-Shiller Home Price Index. Given the current supply-demand imbalance in the housing market, odds are we’ll see another notch higher in home prices.

Also this week, we’ll get the June Durable Orders report, and as usual we’ll be watching the core capital goods orders line item to see if May’s contraction continued in June. We’ll also get the first look at how the key economic horsemen of the global economy faired in July when IHS Markit publishes its Flash Composite PMI data for the US, Eurozone and Japan. As usual, when we look at these reports, we’ll be looking below the headline indices to parse the order, inventory and backlog commentary.

While the Fed will hold its next policy meeting this week, odds are there will be no movement in interest rates given the data that is showing both the speed of the economy as well as inflation have been rolling over. Keep in mind as well, with the Fed’s timetable to begin unwinding its balance sheet set to begin in September, odds are the next rate hike won’t be had until late 2017 if not early 2018. We’d point out that Citibank (C) sees just three more rate hikes between 2018 and 2020, with one in each of those years for a total of four more over the next 42 months. As one ponders this, also keep in mind the shift toward tighter fiscal policy that we are seeing in the Eurozone and Canada.

Soon after the FOMC meeting non-results, we’ll get the first official look at 2Q 2017 GDP, and as we write this, consensus expectation range from a low of 1.9 percent to a high of 2.7 percent compared to the 1Q 2017 reading of 1.4 percent. While the 2Q 2017 figure will be revised twice, a soft number is likely to propel the market higher as investors will read another interest rate hike push out as being likely. Conversely, if the GDP figure is hotter than expected (and we’re not sure how that could happen given the data we are seeing), we could investors see that as a sign the Fed could move sooner than expected. With the market multiple stretched and the VIX at low levels, will keep our eyes on that GDP figure when it hits the tape this week.