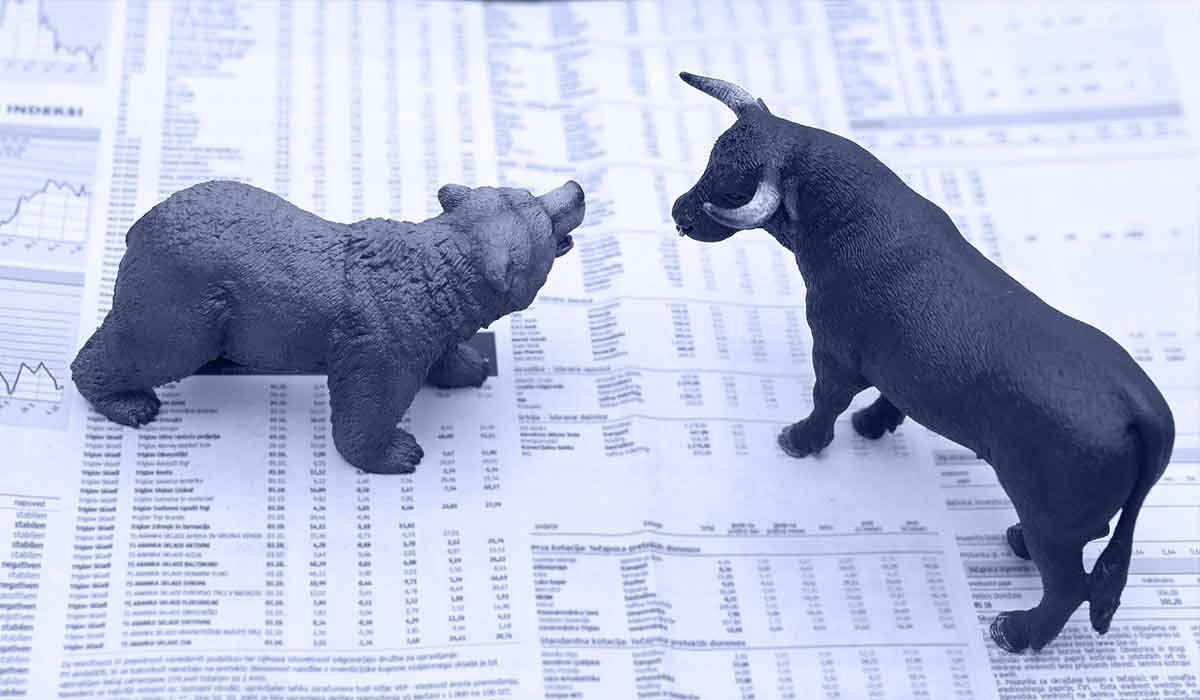 To say 2020 was a year unlike any other is an understatement on several fronts but despite all of it, equities finished the year higher and once again the major indices were bested by several of Tematica Research’s thematic indices. That includes several of them topping the outsized (but fairly narrowly driven) 43.6% return for 2020 registered by the Nasdaq Composite Index.

Investing between February 19th and March 23rd was a clear example of “catching a falling knife” as the uncertainty of the impact of an unfolding global pandemic set in. While that uncertainty lingered well into the 2nd quarter, some trends started to emerge that forced changes in both consumer behavior and company business models. Going into the 3rd quarter, equities recovered as economic data and earnings were somewhere between better than expected and not as bad a feared. There were some setbacks in September and October as Covid case counts surged, but stocks were once again surging in early November due to a fresh shot of hopium following positive vaccine developments and the conclusion of the presidential election.

The bulk of the 2020 gains for the Dow Jones Industrial Average and the S&P 500 came during the fourth quarter, despite the year-end haggling over the pandemic relief bill. The same was true with the small-cap heavy Russell 2000, which climbed 31% in the fourth quarter, outpacing the other major market barometers and enabled its positive return for all of 2020. By comparison, the Nasdaq Composite Index, which closed up more than 40% in 2020, benefited from a number of factors, including the pandemic inspired accelerated shift to digital shopping, work from home and learn from home. That pull-forward in both data consumption and data creation fueled incremental network capacity additions and set up the launch of 5G networks and devices in the second half of the year. The same shift, however, led to a year over year uptick in cyberattacks culminating with the Solar Winds attacks that compromised not just federal institutions and large companies, but also platforms of Microsoft (MSFT) and FireEye (FEYE). Those catalysts in particular led to the strong December quarter showing for Tematica’s Digital Infrastructure & Connectivity and Cybersecurity & Data Privacy investing themes.

It’s great to enjoy the wins, but as we all know, the stock market is a forward-looking animal and that means not taking too much time to pat ourselves on the back, but rather preparing for what lies ahead. Even as the COVID-19 vaccine is being administered, it will take months before vaccines are readily available to all who need them. Then, and only then will many politicians feel comfortable fully reopening their economies. On January 4, for example, UK Prime Minister Boris Johnson just ordered a third national lockdown to be in place through mid-February. Yes, there is a light at the end of the tunnel, but we continue to see some economic speed bumps to be had — at least at the outset of the March quarter.

In the coming weeks, President-elect Joe Biden will be sworn into office, and despite the lawsuits, promises of legislative (and other) disruptions, the machinery of government continues to move forward. Perhaps Capitol Hill will hammer out an infrastructure spending bill that will finally address the nation’s crumbling roads, bridges, ports, airports and highways. The ongoing trade issues with China will also need to be addressed, as well as President Biden’s own agenda items.

Before Biden takes the Oval Office, two known items that we’ll contend with are the CES 2021 tech conference and the start of the December-quarter earnings season. Much like other conferences and trade shows held during the pandemic, CES will be a virtual-only event for the first time in its history. It will still feature a number of keynotes that will prognosticate on what we are likely to expect in the coming year on the technology front and “virtual” vendor booths.

In recent weeks we’ve seen GDP expectations for the start of 2021 drift lower as the pandemic has once again presented a headwind to the economy and efforts to contain it have expanded. We’re also learning of a new strain of Covid-19 that “spreads more efficiently” but “does not seem to evade the protection that’s afforded by vaccines that are currently being used,” according to Dr. Anthony Fauci. At the same time, the distribution of vaccines in the U.S. has gotten off to a slower-than-expected start. Expectations are that vaccine activity will increase in the coming weeks and we’ll be sure to keep tabs on vaccine-related data published on the CDC COVID Data Tracker website. As the number inoculated rises in the coming months, the closer we will be to the economy returning to normal.

The issue is it will take some time to walk down this path, which to suggests things won’t begin to normalize until the second half of 2021. We also continue to think consensus expectations run the risk of an economic and earnings speed bump in 2021. Supporting that view is the retreat in the Citibank Economic Surprise Index in recent months, and also the slowing growth reported in the IHS Markit December Flash U.S. Composite PMI data. Part of that was due to the fall in new export sales, as renewed lockdowns in key export markets dampened foreign demand.

All of this is summed up rather well by Chris Williamson, Chief Business Economist at IHS Markit who said, “… December has seen companies rein in their expectations, given the higher virus case numbers and tougher lockdown stances adopted in some states. Lockdowns in other countries were meanwhile reported to have hit exports. While vaccine developments mean some of the clouds caused by the pandemic should lift as we head through 2021, rising case numbers continue to darken the near-term outlook.” 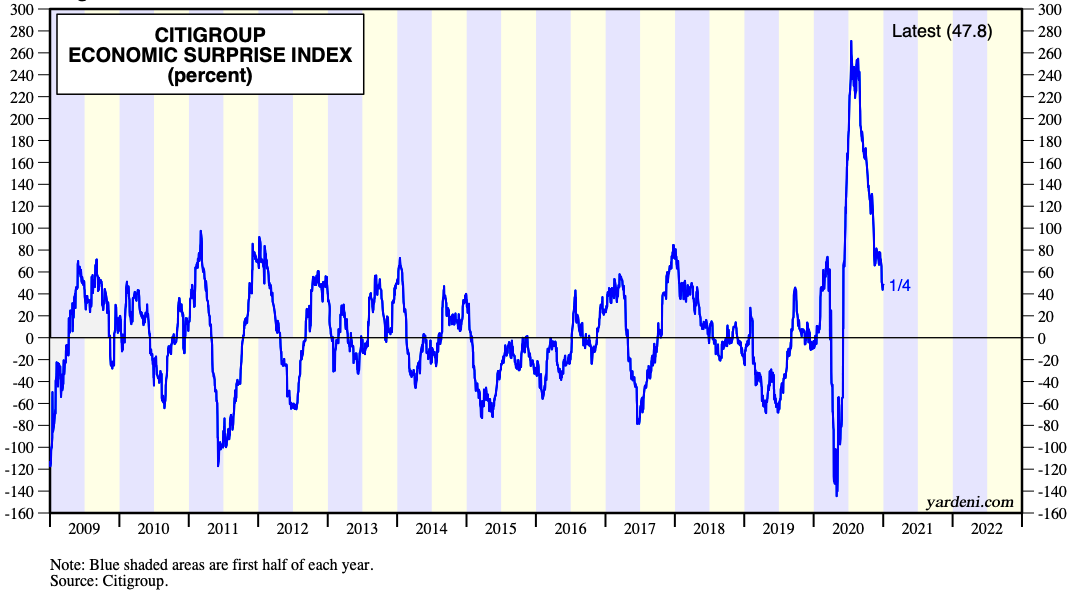 Normally, there tends to be some step down in economic activity from the December quarter to the March one, as consumer spending wanes in comparison to the year-end holiday shopping season. The start of 2021 is expected to see a somewhat larger step down in GDP — to 1.9% during the March quarter vs. the expected 4.1% in the December 2020 quarter, according to data published by The Wall Street Journal’s Economic Forecasting Survey. That same survey goes on to forecast GDP of 3.7% for all of 2021, which means its expectation for the other three quarters of 2021 hover around 4.0%.

While recent COVID-19 new cases have waned some in aggregate across the U.S., hot spots remain — and that has prompted the extension of virus-fighting measures even as a new strain of the virus that spreads quicker has been found inside the U.S. Similar to what we saw after Thanksgiving, odds are we will see a post-holiday rise in new case counts in early January. Should this come to pass, in all likelihood it will mean more restrictions that will be a headwind to the economy and corporate earnings. 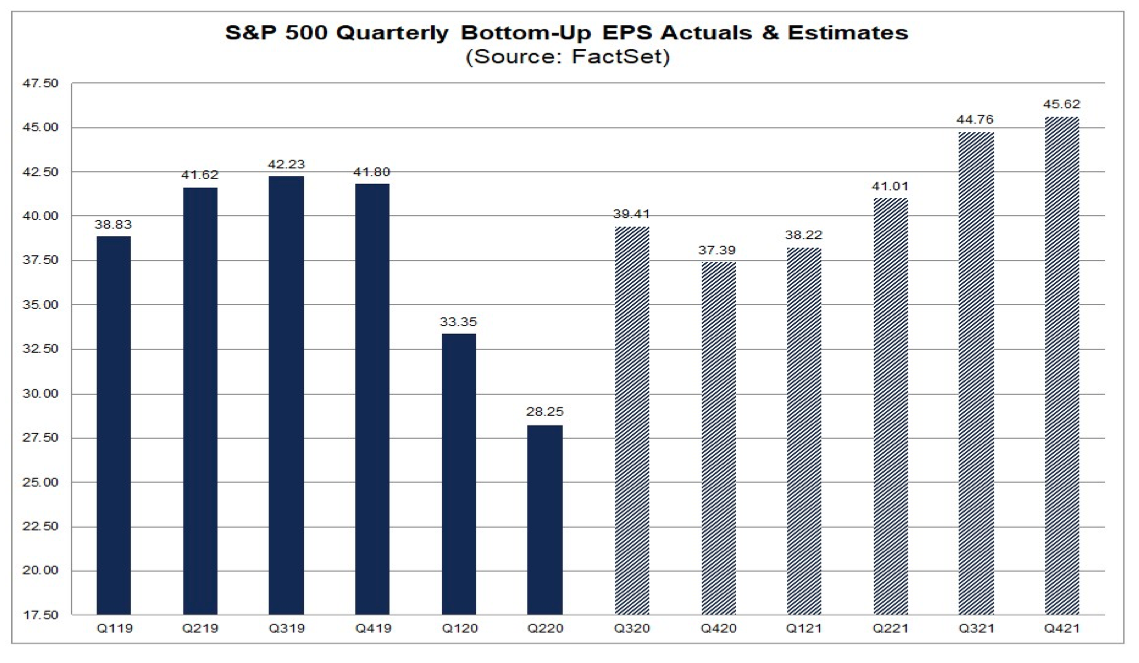 Digging into the data, we see the S&P sectors that are driving that year-over-year decline for the December quarter. 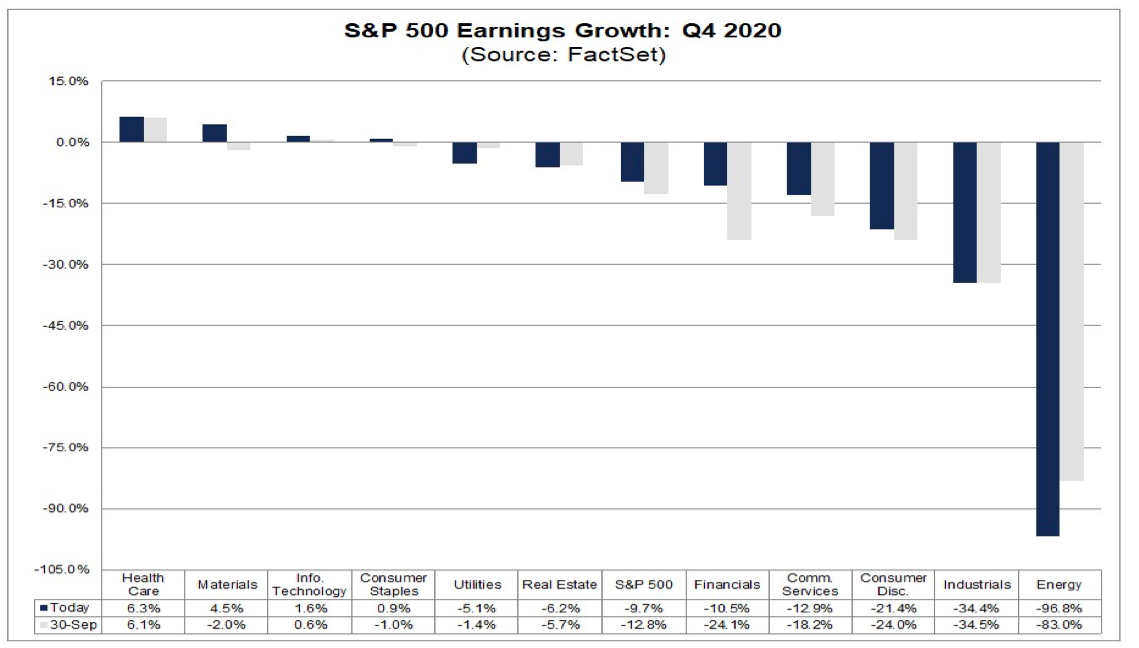 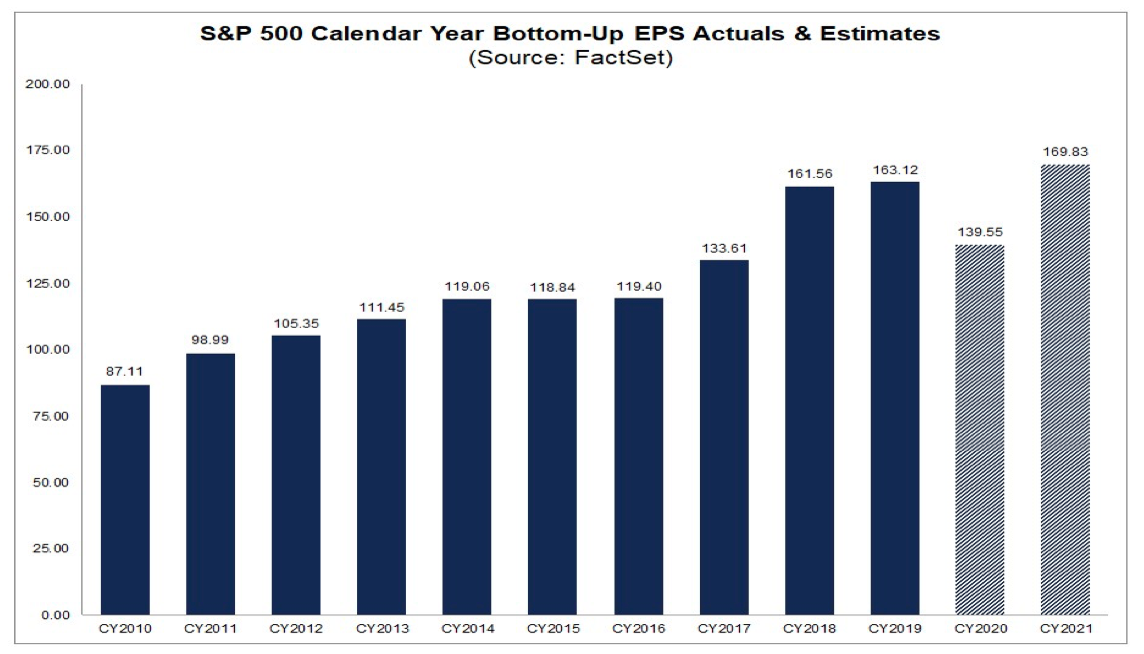 Circling back to the Tematica Research indices that we shared at the outset, their EPS prospects over the 2019-2021 period are multiples greater than for the S&P 500. We attribute this to the pronounced tailwinds that are powering both each of those themes as well as the revenue, EPS and cash flow of the aggregated constituents. One rule of thumb on Wall Street is that faster EPS growth tends to spur multiple expansion, which is a pretty powerful one-two combination for stock prices and index constituents. Reflecting on the below data, it looks like 2021 will be another year of outperformance for several Tematica Research themes and indices.