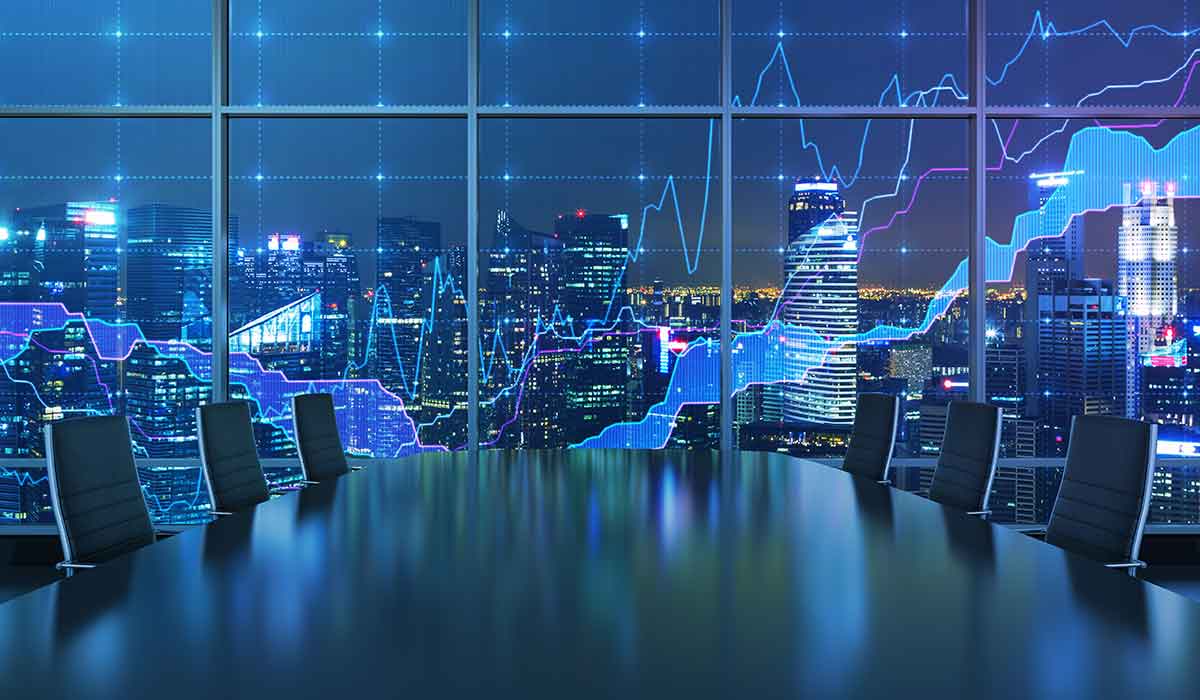 As we witnessed over the weekend, the Caribean and Florida took a beating from Hurricane Irma, and its impact is going to be a major source of weakness in the economy for the current quarter. Paired with the impact of Hurricane Harvey, we’re looking at one-two punch to the GDP gut and we expect existing GDP forecasts for 3Q 2017 will be revised sharply lower in the coming days. That’s enough to rattle the market, but there are other reasons investors should be increasingly cautious. Last week, when speaking at a conference in Germany, Goldman Sachs (GS) CEO Lloyd Blankfein shared that he was “unnerved” by things going on in the stock market. As we’ve been analyzing the economic data and watching the political landscape in Washington, we here at Tematica have been talking about a growing sense of unease in the market over the last several months. Yet, the market has at least thus far managed to shrug these mounting concerns off its proverbial shoulders. 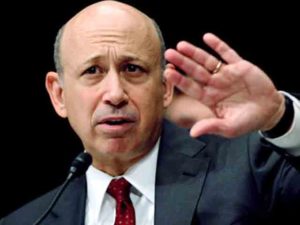 In today’s increasing frenetic society, short attention span filled society sometimes it takes a “voice from on high” to catch people’s attention and wake them up. All it took was a short comment from Blankfein during the question and answer session of his presentation at a conference in Germany:

“Things have been going up for too long,” he told attendees at a Handelsblatt business conference in Frankfurt. “When yields on corporate bonds are lower than dividends on stocks? That unnerves me.”

We certainly share Mr. Blankfein’s concerns and have been hammering the points home weekly in our Monday Morning Kickoff report and the Cocktail Investing Podcast.  To fully understand the source of Mr. Blankfein’s current unease let’s explore his statement:

While there have been modest pullbacks in the market, like the ones in late 2014 and the second half of 2015, a longer view shows the major averages have moved sharply higher over the last five years, with the S&P 500 in the upper range of its long-term upward trend. Before factoring in dividends, the S&P 500, a key benchmark of institutional investors, is up more than 70% since September 2012. 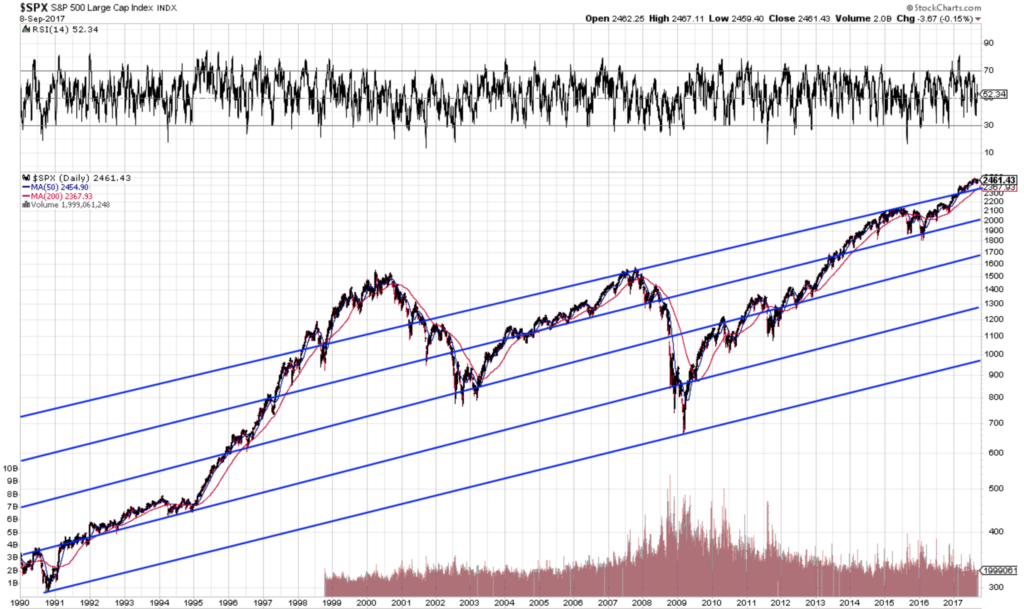 As the stock market has moved higher, so too has its valuation. As we write this, the S&P 500 is trading at 18.7x expected 2017 earnings versus the 5 and 10 year average multiples of 15.5x and 14.1x, respectively. In 2015 and 2016, we saw earnings expectation revised lower during each year until annual EPS growth was nil. With economic data that is once again leading the Atlanta Fed to reduces it GDP forecast, we’re seeing downward earnings revisions to EPS expectations in the back half of 2017. We at Tematica classify that as “unnerving.”

If we look back to when the stock market bottomed out during the Great Recession, the timeframe for the current “recovery” has been over 100 months. By comparison, the average economic expansion over the 1945-2009 period spanned 58.4 months. In other words, the current expansion is rather long in the tooth and a variety of data points ranging from slowing growth in employment to peak housing and auto to a flattening yield curve support this assessment. While the length of expansion has likely been affected by the Fed’s aggressive monetary policy, the bottom line is at some point

While the length of expansion has likely been affected by the Fed’s aggressive monetary policy, the bottom line is at some point it will come to an end. As the Fed looks to unwind its balance sheet and gets interest rates closer to normalized levels, we’re reminded that the Fed has a track record of boosting interest rates as the economy heads into a recession. Let’s not forget that every new presidential administration coming in after a two-termer going all the way back to 1900 has experienced a recession within the first twelve months. Yep, we color that as “unnerving.”

#3: The Market’s Post-Election Euphoria Has Worn Off

Coming into 2017 there was a wave of euphoria surrounding newly elected President Trump with high hopes concerning what his administration would accomplish. Over the last few months, a number of executive orders have been administered, but we have yet to see any progress on tax reform or infrastructure spending. The risk is that expectations for these initiatives are once again getting pushed out with tax reform that was slated for August now being expected (don’t hold your breath) near the end of 2017. The risk is the underlying economic assumptions that powered revenue and EPS expectations in the second half need to be reset, which will mean those lofty valuations are even loftier.

Since August 1, Gold, Silver and the Utilities sector have significantly outperformed financials and consumer discretionary stocks – never a positive sign. The KBW index of regional banks has fallen below is 50-day, 100-day and 200-day moving averages and is down over 18% from its March 1st

#5: The Breadth of Current Rally Isn’t Looking So Hot

The median Dow stock is down more than 4% from its 52-week high and the median S&P 500 stock has dropped nearly 7.5%. Only 44% of Nasdaq members are trading above their 50-day moving average.

#6: Another Contra-Indicator Has Reared its Head — Individual Investor Confidence

TD Ameritrade’s (AMTD) Investor Movement Index (IMX) has continued its month-over-month rise. For those unfamiliar with this, it’s a behavior-based index created by TD Ameritrade that aggregates Main Street investor positions and activity to measure what investors are actually doing and how they are positioned in the markets. The higher the reading, the more bullish retail investors are. In August, the IMX hit 7.45, up from 7.09 in July, to hit an all-time high.

Why is that unnerving you ask?

While TD Ameritrade opted to put a rosy spin on the data, saying, “Our clients’ decision to continue buying reflects the resiliency of the markets.” Institutional investors, however, see this continued surge higher as a warning sign. Here’s why: Historically speaking, retail investors have been late to the stock market party. Not fashionably late, but really late, which means they tend to enter at or near the point at which things start to go seriously awry.

Complicating things a bit further, over the last month CNNMoney’s Fear & Greed Index has slumped from a Neutral reading (52) to Fear (38). Taking stock (pun intended) of these two indicators together at face value sends a mixed message on investor sentiment. Not a hardcore piece of data like the monthly ISM data, but one institutional investors and Wall Street traders are likely to consider as they roll up their sleeves and revisit the last few weeks of data.

How to Know What’s Next

These are just some of the points that could be unnerving Blankfein. Generally speaking, the stock market abhors uncertainty and anyone of those points on their own would be a cause for concern. Taken together they are reasons to be cautious as we move deeper into September, which is historically one of the most tumultuous months for stocks.

Whether you’re a subscriber to Tematica Investing or not, we would recommend you subscribe to both our Monday Morning Kickoff and Cocktail Investing Podcast to get our latest thoughts on the economy, the stock market as well as thematic signals that power our 17 investing themes.