Economic data has been coming in more positive lately, which has led some to get a wee snarky with yours truly over my finger-wagging warnings that the market is exceptionally pricey.  Ok then, game on!

The chart below is the Economic Research Institute’s Weekly Leading Index, which according to ECRI, “has a moderate lead over cyclical turns in U.S. economic activity. Historical data begins in 1967.” It is widely considered one of the better leading indicators for the economy. 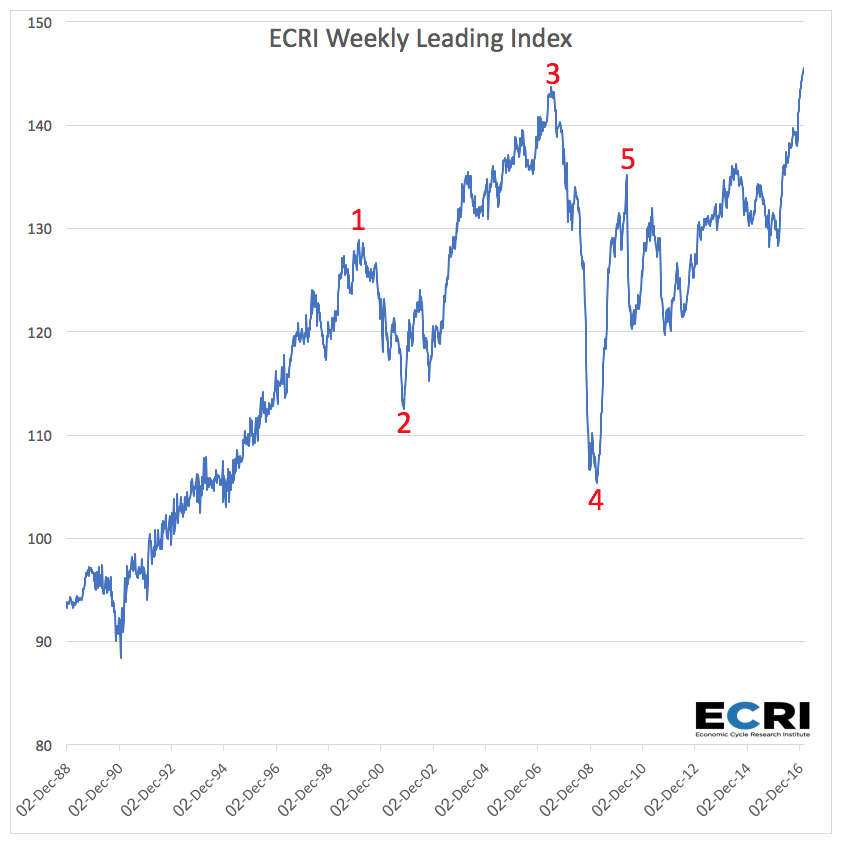 In the weeks and months before each time this leading indicator peaked, along with many other similar ones, the headlines were all about how the economy was moving along so well, champagne and caviar all around and frequently the stock markets were accelerating as well. Only in hindsight could one have seen that we were heading for a major turn and the markets were going to experience a painful pullback.  On the flip side, where the indicator has bottomed out, that was time to get seriously bullish.

Bottom Line: A rising leading indicator is not necessarily a bullish sign for stocks. Stock market returns are in the end, about valuation. Buy cheap and sell expensive. Today stocks are priced at Louis Vuitton levels. Can they go higher? Absolutely, they likely will as we often see an acceleration to the upside just before a major turn. But know that downside risks are rising and upside potential shrinking with every step into more expensive territory.

Since the start of the month, the U.S. equity markets, to use a technical term, have been pretty much mehhh. By Friday’s close the S&P 500 (large cap) was up +0.85%, the Russell 2000 (small cap stocks) was up +0.84% for the month. Tech stocks finally started to show a little hutzpah with the Nasdaq up +2.41%. While Yellen and company at the Fed have been giving lots of lip service to raising rates at the June meeting of the Federal Open Markets Committee (FOMC), longer dated treasuries, as measured by the iShares Barclays 20+ Year Treasury Bond ETF (TLT) rose +1.6% since the start of May.
Even year-to-date stock indices have been mostly meh with oil, gold and bonds giving us a lot more to cheer about:

This chart of the S&P 500 shows how the major market index continues to oscillate within a fairly narrow band and is right back where it was about 18 months ago.

Taking a look at the broader market, the Dow Jones Transports remain in a steady downtrend (green line).

The Russell 2000 (small cap stocks) had been in a steady downtrend for much of the past year, but recently broke above that trend line in April, which is often a positive sign.

Oil (Brent Crude) is now well above the 50-day and 200-day moving averages and has been on a bull run for 103 calendar days with a gain of 89%, which is the ninth biggest gain in any oil bull market since 1983 and is nearly 27% stronger than the average and over 50% stronger than the median. All that has been accomplished over a period that is just half as long as the average bull market and nearly 40 days shorter than the median bull run. That’s a hell of a gain in an exceptionally short period of time, so a pullback here wouldn’t be surprising. Inventory levels still remain over 50% above their historical average for this time of year and oil rigs are now down to their lowest level since October 2009. We’ll be watching closely to see how crude responds if/as the dollar strengthens with the Fed taunting the markets about a rate hike.