Watching last night’s third and final presidential debate was an experience I’d put somewhere between a root canal and wearing a tight wool sweater in Central Park in July. It seems this year the preponderance of what we hear about Election 2016 is personality, not policy. Bespoke Investment Group recently asked 1,500 households around the U.S. to provide just one word to describe the presidential candidates. These are the results put into word clouds.

Regardless of your political leanings. This is a big problem.

Parents now have to be legitimately concerned whether a presidential debate is age appropriate for their children.

Political discourse in the nation has become both absurd and disgusting, with the only rational response for many being a total loss of faith in the system, which leads to a hunker down mentality, which only exacerbates the economic headwinds we face.

If Clinton wins, she will begin her presidency with tens of millions of Americans convinced that she belongs in jail. If the Democrats are able to take the house and Senate, over 40% of the nation will likely be enraged by the ensuing legislation and feel utterly disenfranchised.  If the Republicans maintain the House and Senate, we will likely see increasingly furious and hate-filled deadlocks.

If Trump wins, over 40% of the nation will be enraged by his presence in the White House as growing numbers of his own political party continue try and distance themselves from him. During his campaign he alienated many of those who would otherwise have been great supporters of the Republican nominee. Some see this as a tribute to his “outsider” nature, but once in the White House, that outsider needs to work with others. That will require gaining their respect.

I believe the core of the problem here, the reason that any concept of civility is completely gone, is because government is simple involved in too much of our lives. This means that we all need to agree on one-size-fits-all solutions to a degree that is simply not possible. This was a nation founded on the idea that people of all preferences and persuasions could live peacefully together under a government that was created simply to protect their individual liberties.

If we want to return to civility, we need to respect our individual preferences, get back to running our own lives and by shrinking the scope of government stop running the lives of our neighbors! 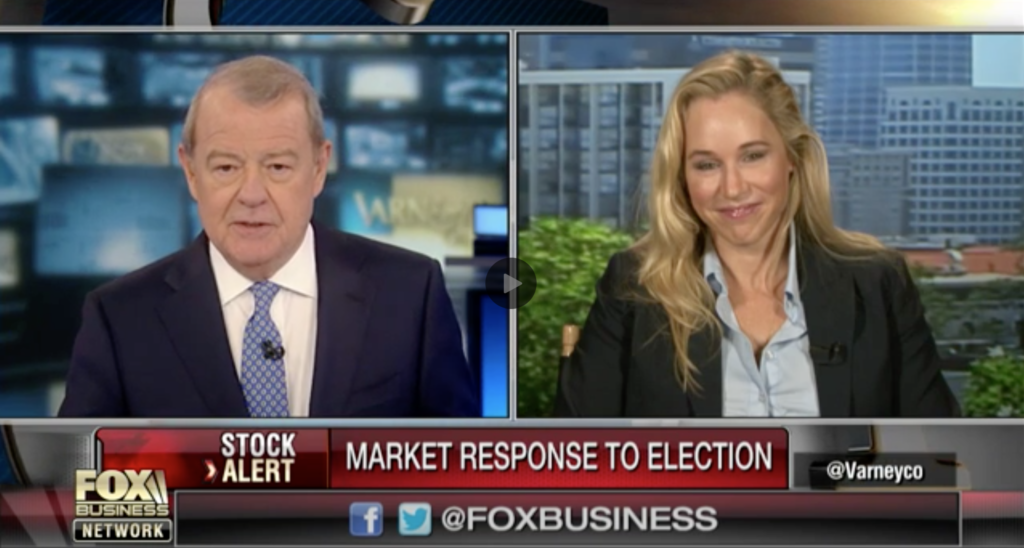 On October 14th I spoke with Stuart Varney concerning the impact on investors of a Hillary Clinton win coupled with a Democrat sweep of the House and Senate. While the market index moves so far have indicated a preference for Clinton over Trump, investors aren’t likely to benefit from a Clinton presidency.

A Clinton presidency would mean higher taxes, which is a headwind to growth. She has expressed a desire to increase taxes on investments, which makes them less attractive relative to other options. She’s also discussed increased regulations, which is already considered by the C suite folks to be one of the biggest challenges facing companies today. While the stock market indices have so far been more bullish when Hillary has a solid lead in the polls, investors should think through what her plans would mean for their bottom line as well as the bottom line of the companies in which they invest.

On March 8th I spoke with Neil Cavuto about how many foreign leaders, particularly those in Europe, are getting nervous about Donald Trump’s statements. Living a good portion of my time in Italy I am able to have a richer perspective on how the rest of the world views what is happening in the U.S., and while I agree that the U.S. ought not chose its policies based on the preferences of other nations, it is always a good idea to at least listen to our friends and neighbors, just as we do in our personal lives.

The United States has the largest economy in the world and the most powerful military, so naturally the rest of the world has a vested interest in what happens here. Our entertainment industry is also the most impactful in the world, so that American cultural shifts are often rippled throughout the globe. What happens here, doesn’t stay here.

For most Americans alive today, World War II is something we read about in the history books. We don’t sense that it impacted our culture in any meaningful way, at least nothing like the way 9/11 has. In Europe there is a very different memory, one filled with great trepidation over those leaders that seek to use the military in ways that are outside of the law. Donald Trump’s repeated comments concerning how he is confident that the members of the military would defy their oath to uphold the law in order to obey his demands strike an alarming cord in Europe, where leaders in the past who used the military that way brought devastation to a continent.

Perhaps Trump is simply using the type of hyperbole that he found worked so well to garner attention for his reality TV show, but hyperbole of that nature on the global political stage, from a man who could be the commander-in-chief of the largest military in the world, in understandably cause for concern.

On February 18th I spoke with Donald Trump’s son, Eric Trump, about his father’s tax plan while I was on Mornings with Maria.

One of the problems with Trump’s plan is that more than 50% of all households won’t pay any federal income taxes. That means that essentially over 50% of all voters won’t be taxed on the benefits and spending plans they support! That is one hell of a great way to ensure that federal spending continues to expand.

All politicians have to compete for voters. Those that promise more goodies are more likely to get votes, that’s why politicians promise goodies. The only thing that places a check on the promised goodies is the reality that those voting for the goodies will have to pay for them. If more than 50% don’t have to pay for the goodies, why not vote for them? Thus those that promise the most are more likely to get the votes, leading to an escalation in goody offerings by those on the campaign trail.

The U.S. is already facing a looming crisis from promised social security and medicare payments that it simply will not be able to afford with a reasonable level of taxation on the private sector, we certainly do not need to exacerbate this trend.

A few days before the South Carolina primaries, while on Mornings with Maria, I had the privilege of speaking with Newt Gingrich concerning Election 2016 and what are the root causes of the U.S. economic malaise.