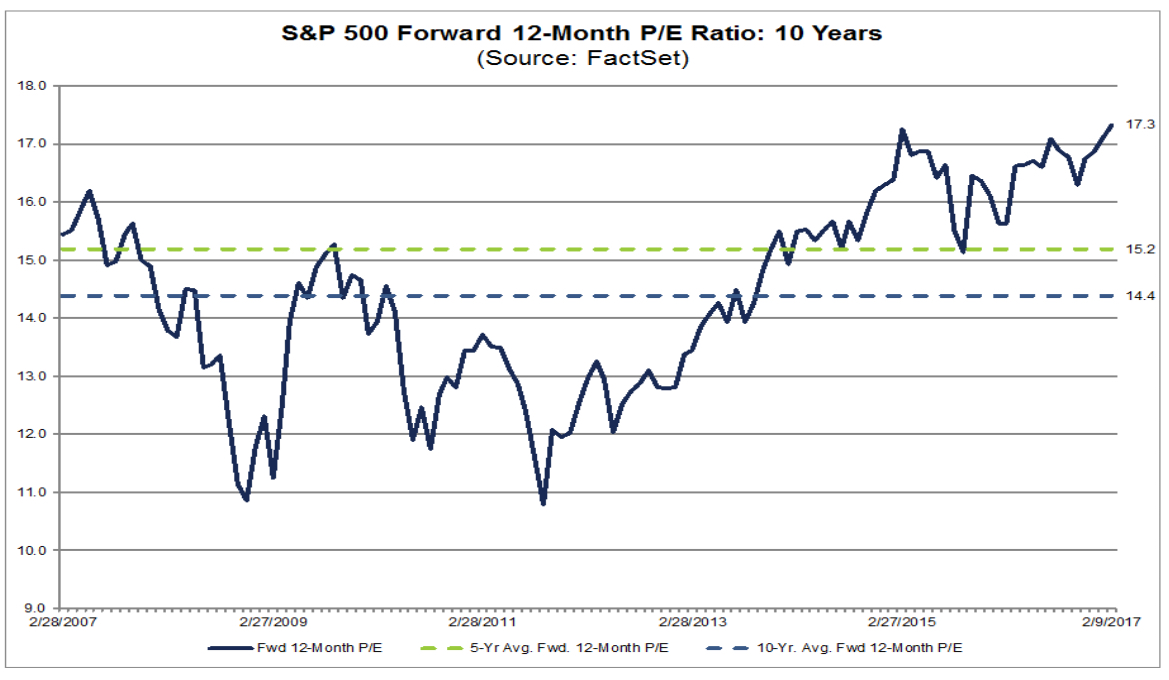 This morning the S&P 500 reached $20 trillion in market cap for the first time in history even though investors have been flocking out of active management funds and into passive ones, such as exchange traded funds (ETFs), at an accelerating rate. This is typically the behavior we see nearing market tops.

As markets move deeper into expensive territory, meaning higher P/E ratios, many active professional investors start to put on protection and/or increase their cash balances as they see less upside potential relative to downside risk. If the markets continue to press higher, those managers will then obviously underperform. Often this is when we see investors’ confidence rise as passive outperforms active and with that, we see accelerating fund flows into passive over active management. We saw such moves in 1999-2000 and 2006-2007, typically marking an impending market top. 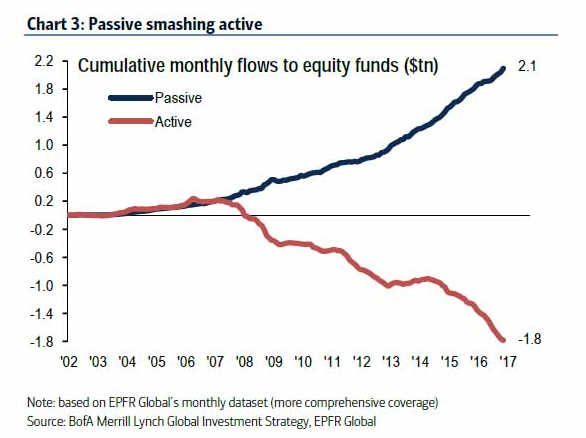 Investment managers that have stood the long-term test of time, such as Jeremy Grantham of GMO, are watching clients walk out the door as we see the reemergence of “This time is different” theory with increasing belief that high P/E ratios this time mean something different. We saw similar moves away from those tried-and-true managers in 2000 and 2007. Today’s market is not one that would be wise to short as confidence remains high, but watch out for the catalyst that reverses the assumptions upon which all that investor faith is resting. 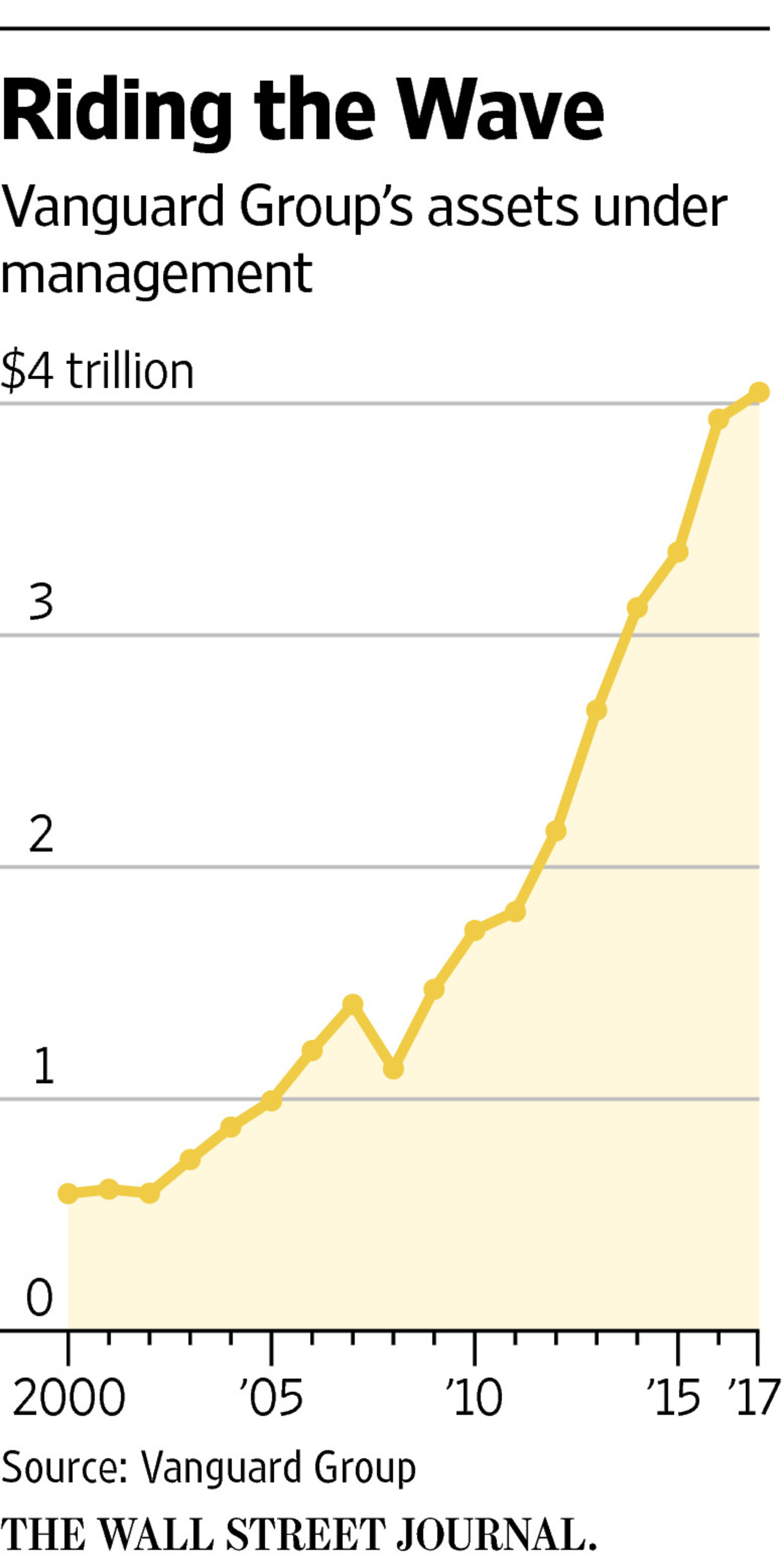 Vanguard crossed the $4 trillion mark in January after collecting an estimated $49 billion in net new cash from investors during the month. Of those January flows, about $45 billion went into index funds while the balance went to actively managed funds.

In 2016, index funds accounted for about 85% of the total net new cash Vanguard attracted.

These flows have led to the size of passively managed assets in the U.S. to grow significantly faster than active, which have nearly flatlined in recent years. 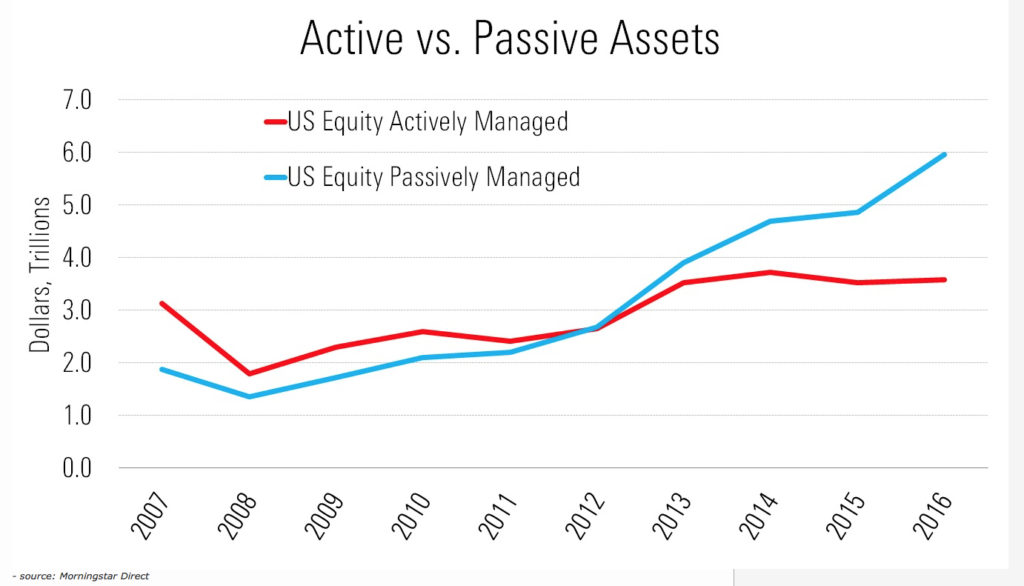 This confidence in more rules-based approach has come at a time when equity valuations are more stressed than at any other time in the past decade. As P/E ratios get stretched, upside potential continues to shrink while downside risk grows. 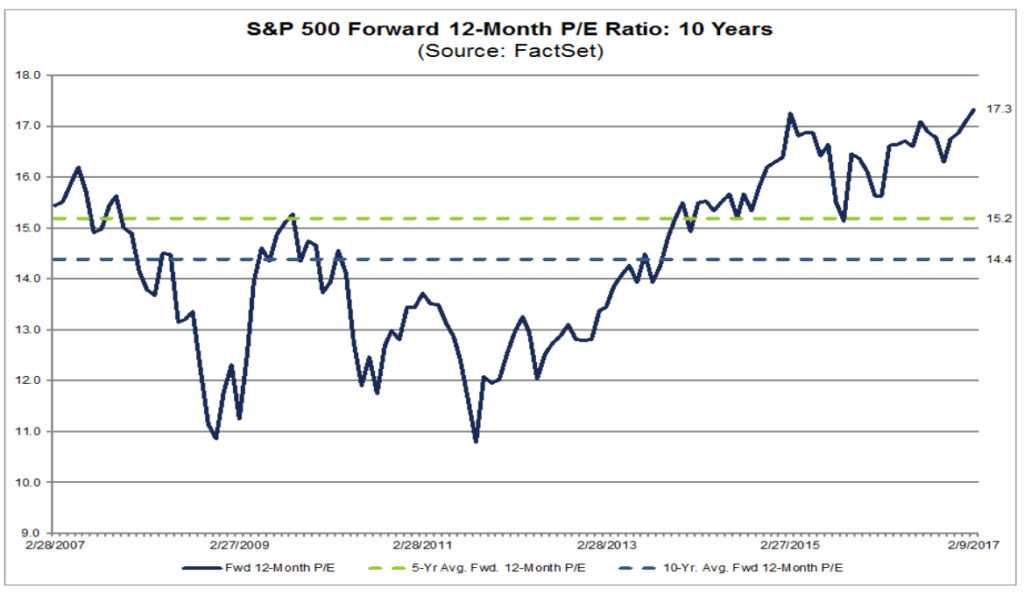 Meanwhile trailing 12-month net margins look to be rolling over – yet another warning sign. 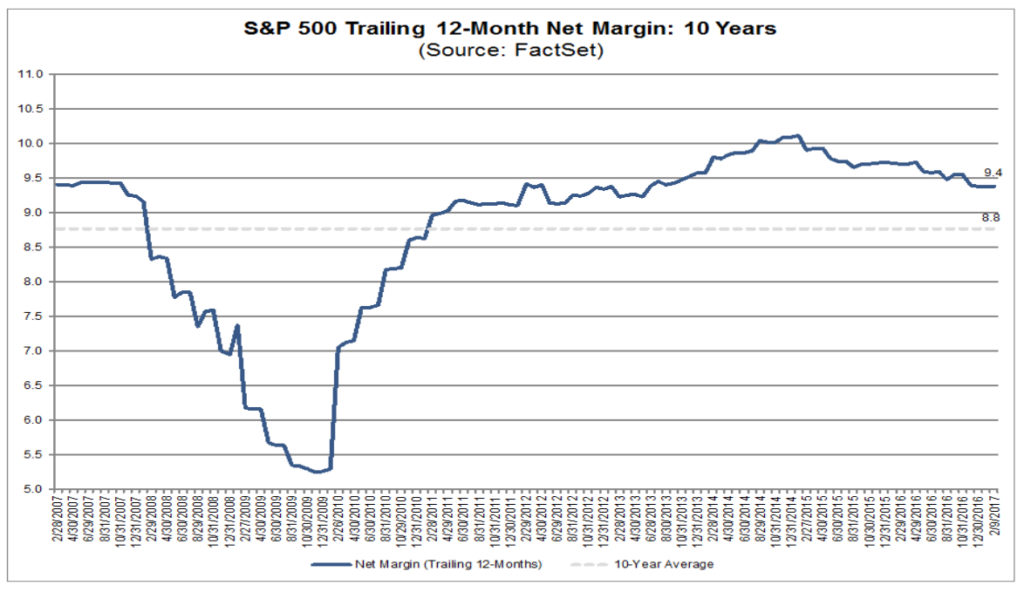 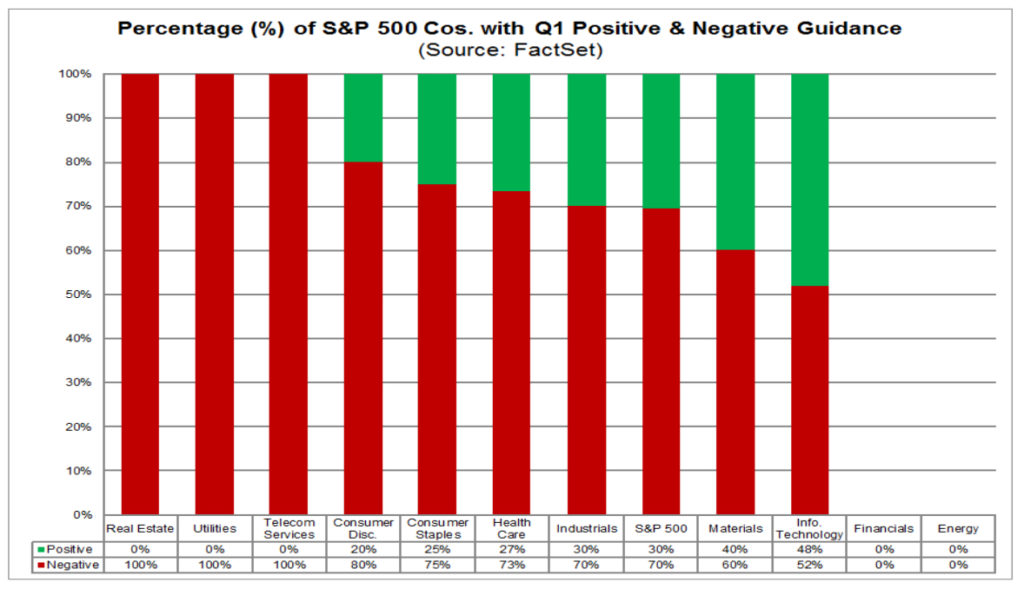 But that hasn’t stopped analysts from reflecting investor enthusiasm. This chart pretty much speaks for itself – that is a lot of perfection expectation! 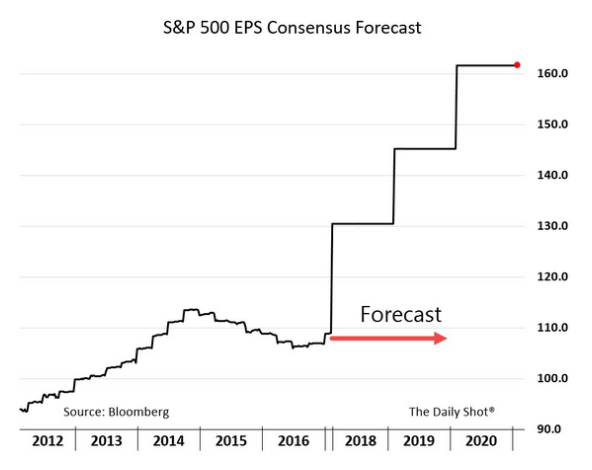 While investment newsletter writers fan the flames of enthusiasm, which has also typically been a signal of an impending market top.

The share of newsletter writers who are optimistic on the stock market climbed to 62.7% this week, the highest level since 2004, according to Investors Intelligence, which surveys more than 100 newsletter writers each week for its Sentiment Index. 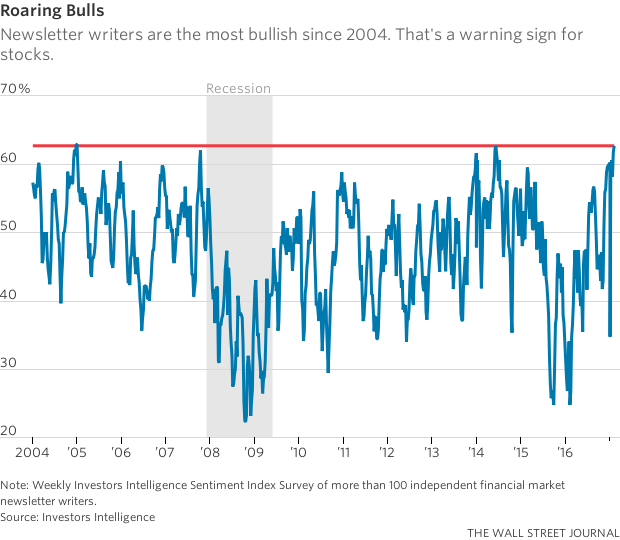 A reading above 55% suggests a trading top is forming, while topping 60% means “it is time to start taking defensive measures,” according to Investors Intelligence.  The measure has been above 55% for 11 straight weeks, and above 60% for four of them.

Remember Bob Farrell’s Rule No.9. “When all the experts and forecasts agree, something else is going to happen. This is not magic. When everyone who wants to buy has bought, there are no more buyers. At this point, the market must turn lower and vice versa.”

On a more positive note, so far EPS growth for the December quarter is around +5 percent for the S&P 500 versus the +3 percent bottoms up consensus estimate at the beginning of that quarter. So there is some cause for optimism, but the level of success that the markets are pricing in is exceptional. Since the market’s bullish moves have been based upon expectations around President Trump’s reduction in regulation and taxes, it is noteworthy that he recently acknowledged that the repeal and replacement of the Affordable Care Act, a major talking point during the election, could be pushed back into 2018. We suspect that isn’t the only change that won’t be implemented as quickly as the market expected.

Sources: Vanguard Reaches $4 Trillion for First Time – WSJ and Newsletter Writers Are the Most Bullish Since 2004 – WSJ

On February 25th, we learned that the previously robust Conference Board Consumer Confidence index dropped by the most in 4 months, missing expectations by the most since October. The Chart below, hat tip to ZeroHedge, shows the trend from 1995. Some good news within the Consumer Confidence readings were seen in the Jobs Plentiful Index, which rose to 13.9%, its highest reading since June 2008, and the Jobs Hard to Get Index fell to 32.5%, its lowest reading since September 2008. Both readings indicate continued gradual improvement of the US employment picture.

Investor sentiment continues to rise, up now 53% from the 10-year low in November 2012 and up 28% from December 2013.  Corporate earnings continue to be a source of concern however, with 82% of the S&P500 companies that have shared forward guidance issuing negative outlooks.  This past earnings season was a repeat of what we’ve come to expect in recent years, as bottom line performance generally meets expectations, but top line revenue continues to be relatively weak, often missing expectations.  The bottom line is being met more through cost cutting that through increasing sales.  Since cost-cutting measures are a more limited source of bottom line growth that increasing sales, this warrants attention.

Meanwhile fears of a hard landing for China are resurfacing, with the Shanghai Composite falling nearly 10% in the past week and down another 2% overnight as of February 25th. In addition, China’s yuan dropped the most in over a year and the Shanghai Composite declined the most in five months on speculation that the People’s Bank of China will act to end the yuan’s steady appreciation. Given the pressure that emerging markets have been under, this is one area where conservative managers such as Mr. Brooker and the First Eagle funds are searching for stocks that are cheap enough to buy.

Bottom Line: Market volatility has returned as the Fed slows QEInfinity and economic news continues to surprise to the downside, coupled with increased fears over China and emerging markets, keeping markets mostly sideways so far this year.