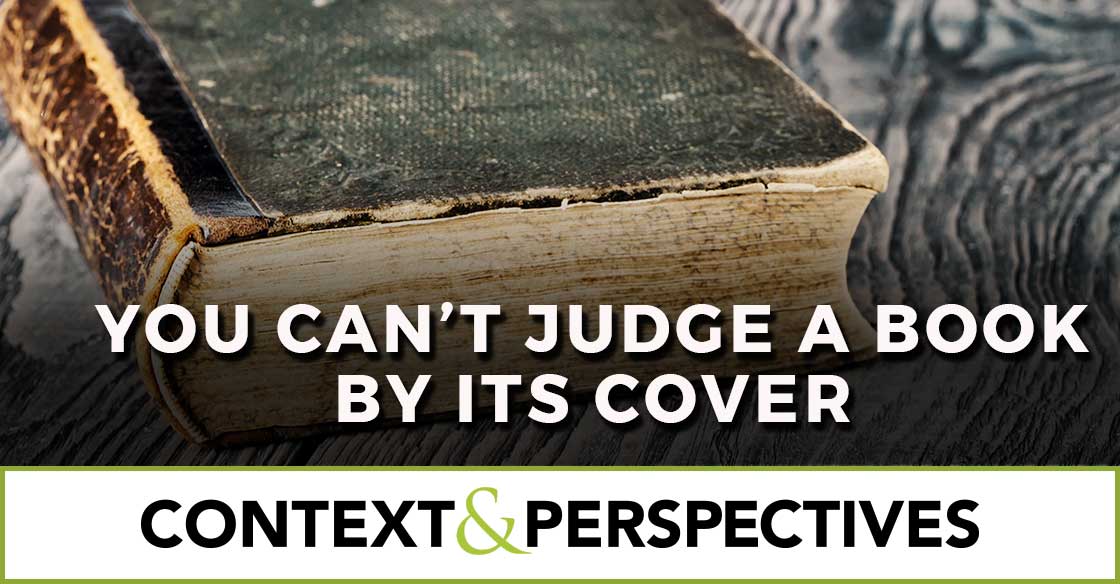 It’s the end of July and has been hot as hell for much of the world this week, around 107 Fahrenheit in Paris yesterday! So I’ll do my best to keep this look into economy and markets a bit shorter than my usual. When economies and markets are near a turning point, often the headlines tell a very different story than is revealed by digging deeper into the data – you can’t judge a book by its cover. In this week’s issue of Context & Perspectives:

Budget Debate Off the Table Until 2020

Apparently, the Democrats were also feeling the heat as they managed to work out a deal on a 2-year budget with the President, so at least that drama is off the table until after the elections. Maybe at some point during the elections, someone will mention the enormous level of debt the government has accumulated, while Social Security remains a massively underfunded elephant in the room. Or maybe not. We live in interesting times.

Investors Just Not That into the Stock Market

While the market continues to grind higher, digging into the details we find that investors have really not been loving this stock market. Over the past 52 weeks, according to data from the Investment Company Institute (ICI), investors have pulled $329.4 billion out of equity funds, another $94.0 billion out of hybrid funds and put $75.7 billion into bond funds. So how has the market continued to march higher? Over the past five years, investors have been net sellers of the market with corporations themselves the net buyers through stock buybacks, which isn’t quite as rosy as it may first seem.

Some of these buybacks are being funded through debt, which has led global corporate debt to reach unprecedented heights, as I discussed in my last piece when I pointed out the proliferation of not just corporate debt, but also the increasing numbers of zombie corporations. There are a few others also concerned with this, as was discussed in a Barron’s article yesterday, you might recognize just a few of these names.

Part of why investors are selling while corporations are buying back their own shares is likely a function of demographics. As the Baby Boomers move adjust portfolios as they move into retirement, their portfolio construction will naturally have to change and that shift, in a period of central bank interest rate suppression, is much harder than it was for generations past. The level of income that can be feasibly generated from a portfolio today is much less than what the Baby Boomers’ parents enjoyed. At the other end of the spectrum, Millennials are saddled with unprecedented levels of student debt, so they aren’t exactly big buyers of shares either. Between central bank manipulations and demographics, this is a very different investing environment.

Given the relative strength of the US economy compared to the global economy, which is slowing more dramatically, it is interesting to note that large-cap stocks, (which tend to have more international exposure) have been outperforming small-cap stocks at a level not seen since January 2008 – ahem, share buybacks, anyone? 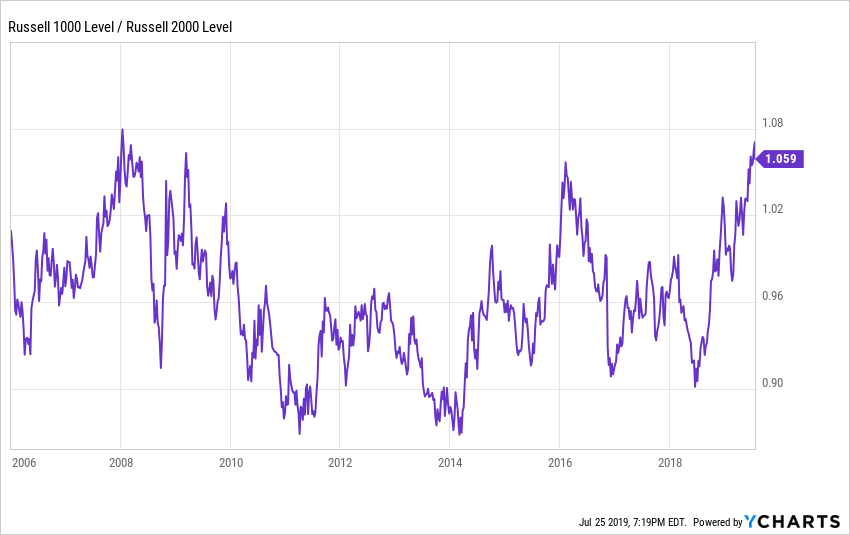 This week’s Markit manufacturing PMI came in at 50.0, meaning no change in output, and was the weakest level since March of 2009. The United States wasn’t alone as Germany’s Markit Manufacturing PMI was the lowest since July of 2012 and the Euro Area as a whole came in at the lowest level since December 2012. A composite of the five Federal Reserve manufacturing activity indices (courtesy of Bespoke Investment Group) reveals that all nine subcomponents have declined year-over-year, with Prices Paid leading the decline, down -24.2% and New Orders coming in the second worst, down -22.2%. New Orders are also down -10.2% from just this past April. That is not exactly a rosy leading indicator. The International Monetary Fund has cut global growth forecasts four times this year.

When looking at manufacturing globally, the first company to come to mind is Caterpillar (CAT). The company reported results for the June quarter that confirmed the overall slowing we’ve been seeing in the global industrial sector. Sales growth for the company has weakened along with various indicators of slowing we’ve been seeing come in from all over the world. We aren’t seeing an imminent crash, but Caterpillar’s results certainly support the theory of spreading weakness. Sales for the bellwether company peaked in North America in February 2018 at 30% year-over-year and have been falling ever since, with June’s 12% year-over-year growth rate the weakest in 18 months. North America remains the strongest region for the company and one of only two posting positive growth. The rolling three-month average global sales growth rate is down to its lowest level in about 14 months and the company’s streak of 28 consecutive months of rising sales is being threatened. This tells you an awful lot about the global economy.

The Consumer & Government Props Up GDP . . . with Debt

Friday morning the first estimate for GDP for the second quarter was released, rising 2.1% versus expectations for 1.8% – 2.0% and up from 3.1% in the first quarter. This quarter was all about the consumer with personal consumption expenditures up 4.3% (annual rate), the strongest performance in six quarters. At the same time, American Express (AXP) and Capital One Financial Corp (COF) reported an increase in the number of accounts overdue by 30+ days in the second quarter. Personal Savings also declined -3.6%. Spending up, debt up and savings down – not exactly a sustainable trend?

Looking further at the consumer, on the positive side, the solid quarterly earnings report from short-term staffing provider Robert Half (RHI) provided evidence that we are seeing domestic wage growth with the bill rate (which is basically the cost of waters for the company’s customers) was up 5% year-over-year in the past three quarters. That’s good news for the consumer, but keep in mind this is not a leading indicator. On the other hand, employment at small businesses, which does tend to be a leading indicator as small businesses are quick to respond and adjust to the changing economy, fell by 23k in June after having fallen 38k in May. The last time we saw back-to-back drops of that magnitude was in early 2010. For all the hoopla over employment, the last Job Openings and Labor Turnover Survey found that job openings were down -4% from the cycle high and new hires were down -4.4%. Again, not saying we are falling off a cliff here, but we are looking for indicators that the trend is changing direction and these data points clearly point towards that assessment.

Friday’s GDP report also found that gross private domestic investment declined -5.5%, the worst showing since the December quarter of 2015 with spending on non-residential structures falling -10.6%. This drop on business investment took a full percentage point off of GDP – to be fair, they are awfully busy buying back their own shares. If businesses are cutting back on investments in machinery and structures, isn’t hiring going to be affected? That will affect consumer spending. When looking at that fall in domestic investment, keep in mind the trade wars and how Chinese foreign direct investment has declined by about 90% over the past two years.

Along with a jump in consumer spending, government spending also jumped, rising 5% on an annual basis. That is the biggest increase in spending since the second quarter of 2009 when the economy was literally falling off a cliff. Not to be a negative Nancy here, but digging into the math a bit we see that consumer spending and government combined rose at a 4.4% annual rate while the rest of the economy contracted at a -12.1% rate.

In the end, and I’m doing my best to wrap this up quickly for all of you struggling with the heat, all eyes remain on the entities most responsible for the health of the stock market these days – central banks. The European Central bank policy announcement this week kept the benchmark despite the rate at negative 40 basis points but indicated the bank is considering additional quantitative easing and potentially a tiered deposit rate scheme to help protect bank profitability – not exactly a shocker given the poor condition of many of the region’s banks. The outgoing head of the ECB, Mario Draghi, stated that the outlook “is getting worse and worse.” In response, the German 10-year yield traded as low as negative 42 basis points. For context, the US 10-year closed the same day at 2.075%.

On Tap Next Week, the Fed Re-Takes Center Stage

Next week the Federal Reserve is expected to cut its key rate by at least 25 basis points and the market is pricing in further cuts to follow. Many are arguing that the Fed needs to be Gretzky and move to where the economy is going to be, not where it is today. They may be right, but the Fed has backed itself into a really tough corner. A typical rate-cutting cycle sees 525 basis points of cuts. Today, it has about half of that to work with and over the coming months the economy is facing quite a few potential shocks:

The Fed may want to keep some of those precious few arrows in its quiver. It is also facing competition in the race to the bottom as many of the world’s central banks are either cutting or are looking to begin cutting rates in the near future. Meanwhile, the market continues to grind higher.