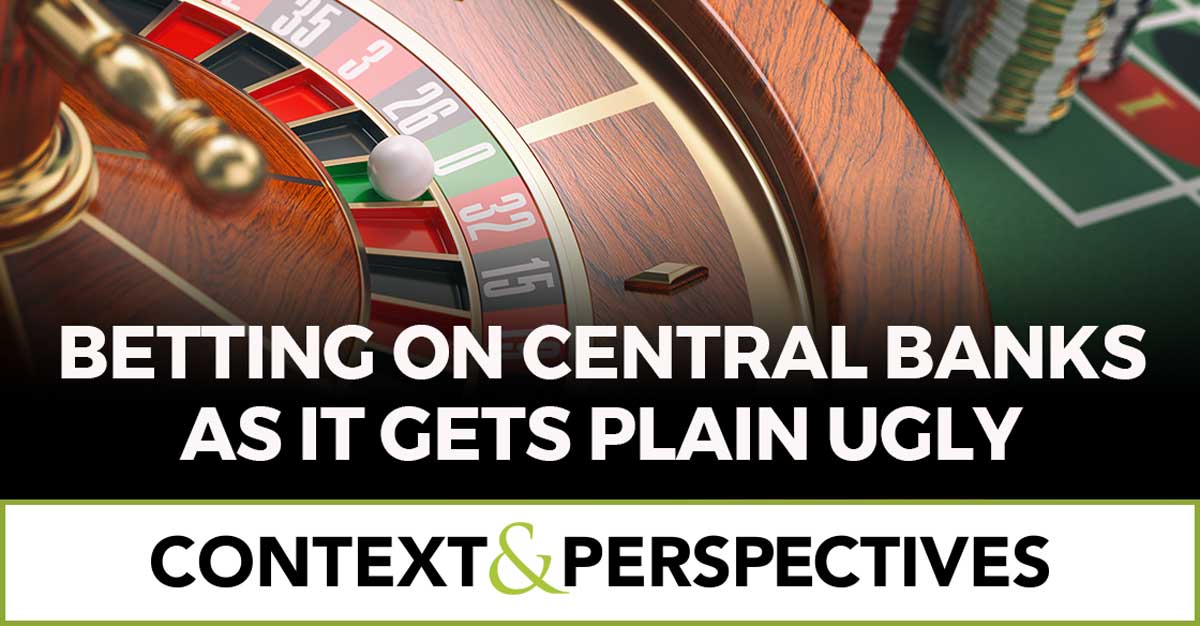 In this week’s piece

The market is hoping, praying and pricing for a Federal Reserve rate cut ostensibly driven by the now dual trade wars, which means the actions of the president are driving both monetary and fiscal policy – surely this will not end well. That is not a political statement as in this game one cannot afford (literally) to be influence by biases towards either the left or right, but it is rather a lesson of history. One individual driving both fiscal and monetary policy for a nation has never come to a utopic end.

The market participants, however, have learned their lesson over the past 10+ years, weak fundamentals are meaningless, trivial details in the face of the power of the world’s major central banks. Or are they? It has been said that something that cannot go on forever, won’t. I know, I know, this time it’s different.

This week Federal Reserve officials gathered in Chicago for a research conference and signaled in interviews and speeches that they are aware of the rising risk of a weaker-than-expected economy. According to the CME Group, traders in futures markets have placed about a 25% chance of a rate cut at the Federal Reserve’s June 18-19 meeting and a 75% chance of at least one cut by the July 30-31 meeting. Chairman Powell on Tuesday stated that, “We do not know how or when these trade issues will be resolved…We are closely monitoring the implications of these development for the US economic outlook and, as always, will act as appropriate to sustain the expansion.”

Across the pond, European Central Bank president Mario Draghi, while wearing the bright blue tie that has often accompanied unexpected stimulus announcements, surprised markets on Thursday by making it clear that the ECB expects rates to stay at their current levels until at least mid-2020. That is longer than had previously been indicated which pushed the euro unexpectedly higher. Investors back in the States ought to take note that central bankers may not be quite as eager as the market hopes to provide immediate support upon signs of weakness. In the US, the issue may very well be complicated by one of the drivers of the weakness – the trade war. One can imagine that as Fed officials ponder the data coming in, the question could arise, “Would it be wise to use stimulus to counter the effects of trade negotiating tactics? Where might that road lead?”

In the Fed’s most recent Beige Book the word ‘uncertain’ appears 21 times, a 6-year high. For a longer-term perspective, in data going back to 1996, that word only appeared more between 2011 and 2013 during the debt ceiling drama, the US debt downgrade, two rounds of quantitative easing and the euro area recession. Uncertainty, you think?

It was a dour week for labor market data as our Middle-Class Squeeze investing theme came to the forefront.

This week’s ADP payroll report was a big surprise to the downside with only 27k net new jobs added versus consensus expectations for 185k and an enormous decline from the prior month’s addition of 271k and the previous 12-month average of 223k. This was the weakest growth in jobs since March 2010 (in orange below). Looking back to prior to the financial crisis, this rate was similar to the warning signs from the December of 2006 report (in red below). The declines were widespread across sectors, making it tough to write this one off, which the bulls will be looking to do. Small businesses, which typically lead the cycle, saw employment contract by 52k in May, also the weakest result since March 2010. To really hammer it home, the goods-producing sector saw a drop in jobs of 43k – this is the same level of decline we saw back in December 2007, the month that the Great Recession began. In the good-producing sector, there were declines across the board from small, mid-sized and large firms with the small businesses (that canary in the economic coal mine) seeing the lion’s share.

The day after the ADP report, the Challenger, Gray & Christmas Job Cut report revealed that US-based employers announced plans to cut 58,577 jobs from their payrolls in May, a 46% increase from April and an 86% increase from May of 2018. Year-to-date cuts are up 39% over the same period from last year with most of the cuts coming from the tech sector. Cuts in the Auto industry for the first five months of 2019 are 211% higher than 2018 and have hit the highest 5-month total since 2009. Keep in mind this sector is highly sensitive to the business cycle.

Those that were looking for the Bureau of Labor Statistic’s Nonfarm Payroll report to contradict ADP’s report from earlier in the week were stunned on Friday to see the economy added just 75k jobs in May versus expectations for 175k.

Average hourly earnings rose just 0.2% month-over-month versus the 0.3% expected. More concerning is that while net new jobs were just 75k, the number of persons employed part time for economic reasons (meaning they cannot get a full-time job) declined by 299k, meaning these people lost the only work they could find. So far monthly job gains have averaged 164k in 2019 versus 223k in 2018.

The JPMorgan Global Manufacturing PMI dropped from 50.4 in April to 49.8 in May, the lowest reading since October 2012. The slowdown has been broad – Austria, Canada, Czech Republic, Denmark, Germany, Japan, Italy, Malaysia, Poland, Russia, Switzerland, Taiwan, Turkey, and the U.K. are all in contraction. Germany, the main horsepower for the EU, experienced the biggest drop in Industrial Output in four years, down -1.9% in April versus expectations for -0.5%. US exports of capital goods (ex. Autos) fell by 5.7%, the sharpest decline since September 2008, while imports fell 3.0%. Capex momentum has left the building. In the US the HIS Markit Composite PMI Index (Manufacturing and Services) saw activity drop to its lowest level since May 2016.

With the drama of the trade wars dominating headlines, it would be easy for US-based investors to miss the fireworks going on elsewhere. Here’s a quick rundown:

Finally, if you aren’t yet convinced that we have already hit the peak of the economic cycle with the major economic risks now to the downside as we look forward, consider and this $890 BMW Scooter – yes, a scooter. I need a drink.