Key Points Inside This Issue

Earnings expectations for the first half of 2019 get revised lower

Stocks surged last week, with all four major domestic stock market indices finishing up in low single digits compared to the prior week. This move was inspired by a number of factors, including a dovish-sounding Fed Beige Book report as more Fed districts have become less optimistic about the economy. Aside from the hard economic data, as we shared last week, rail company Genesee & Wyoming (GWR) reported traffic volumes for December that fell 4.8% year over year, and we saw sharp declines in the January reading for the Empire State Manufacturing Survey General Business Conditions Index.

This and the other data in the last several weeks led John Williams, president of the New York Federal Reserve and a voting member on the Federal Open Market Committee, to say in a speech Friday that the Federal Reserve should be cautious about hiking interest rates further after a year that saw four quarter-point increases. This reiterated the “data dependent” and patient view Fed Chair Powell exuded recently and signals a rate hike in the next few months is likely off the table.

Another powerful factor that led the market to finish the week on a high note was potentially positive progress on the U.S.-China trade front. On Thursday, The Wall Street Journal reported that Treasury Secretary Steven Mnuchin had floated the idea of easing tariffs on Chinese goods as the two countries continue to negotiate on trade. CNBC reported China offered a six-year increase in U.S. imports during recent trade talks and the potential deal could reduce the annual U.S. deficit to zero by 2024. These would be welcome developments ahead of the next round of trade talk in Washington on Jan. 30-31. Given the economic data emanating from China that shows declining factory sentiment, deflation and falling exports that have prompted China to add new stimulative measures for its economy, we are hopeful for more concrete and positive progress as we enter February.

There were also more developments on border security and the government shutdown, which still persists. This now longest government shutdown is increasingly expected to act as a headwind for the economy with some estimates putting the impact at 0.1-0.2% to GDP for each week of the shutdown. We will continue to watch the situation, potential discussions and any pending votes in Congress for what it means for the government shutdown as well as an incremental tailwind for our Safety & Security investing theme.

The government shutdown aside, potential progress on U.S.-China trade talks and more dovish talk by the Fed is helping the stock market grasp at that footing that we’ve been looking for. Granted it is tenuous at best, particularly on the trade front for any deal will hinge on the details. We are also still in the relatively early innings of the December-quarter earnings season, but this could very well help investors look through the growing list of companies that have served up disappointing earnings or guided below expectations. Notable misses last week were by JPMorgan Chase (JPM), BlackRock (BLK), Morgan Stanley (MS), JB Hunt Transport Services (JBHT), and Signet Jewelers (SIG), which was the latest victim of weak holiday sales.

But that was last week, and this shortened week for the market started off on a very different note. Given the growing signs of the slowing global economy, The International Monetary Fund (IMF) cuts its forecasts for world economic growth in 2019 to 3.5%, down from 3.7% forecast in October and 3.9% expected in July as it concedes the “global expansion has weakened.” While we here at home are focused on the potential impact of the government shutdown, the IMF’s forecast was  revised lower primarily due to Europe:

This view of slowing growth is making its way into the c-suite as evidenced by the latest edition of consulting firm PwC’s annual survey of CEOs. That findings of that survey of hundreds of corporate leaders showed 30% of respondents the hundreds of corporate leaders feel growth will decline this year. That’s a six-fold increase from a year earlier — when 57% were optimistic. That optimism was likely due to the impact of tax reform and as we know came before tariffs associated with the US-China trade war.

According to PwC, one of the clear messages from the new survey is “confidence is waning” amid rising trade tensions and protectionism. The survey found a 41-percentage point drop in CEOs choosing the U.S. as a top market for growth, and optimism among North American executives dropped the most sharply — from 63% to 37%. To me, that adds to the concern over corporate guidance to be issued during the current December quarter earnings season that I’ve been sharing over the last few weeks. Let’s remember too that we still have yet to see firm details emerge regarding Brexit and US-China trade talks, which are set for another round next week in DC. 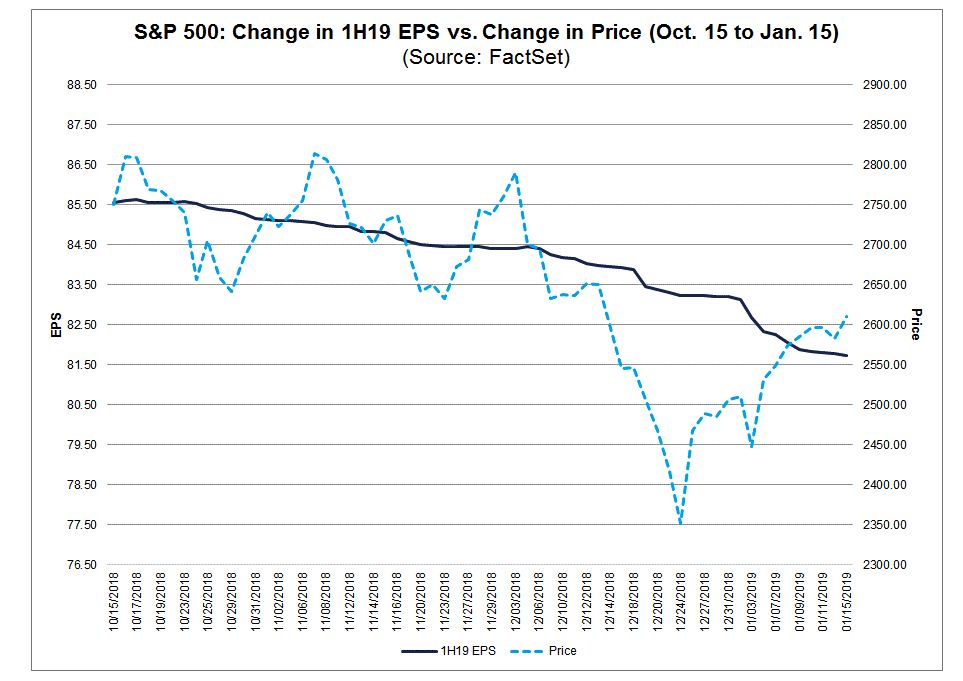 The question we will continue to work toward answering as the current earnings season progresses is what are S&P 500 earnings looking like for 2019? That determination will shape what investors see as the appropriate market multiple based on the vector and velocity of the global economy and where we are in the business cycle. As those answers are determined, we here at Tematica will continue to look for companies that are poised to grow their earnings faster than the S&P 500, which historically has translated into a premium valuation relative to the market multiple. We aim to accomplish that identification process by leaning on our 10 investment themes and the signposts that are Thematic Signals.

To many a seasoned investor, we recognize that week to week stock prices can drift higher or lower, but it’s the longer trend in the share price that matters. Well, week over week we saw several of the Thematic Leaders move higher – AMN Healthcare (AMN), Chipotle Mexican Grill (CMG), Dycom (DY), Amazon (AMZN), and Axon Enterprises (AAXN) – while Netflix (NFLX), Del Frisco’s Restaurant Group (DFRG), Costco Wholesale (COST) and Alibaba (BABA) gave up some ground. Year to date, however, nearly all of the Thematic Leaders are in positive territory with quite a few outperforming the S&P 500 and its 5.0% gain so far this year. 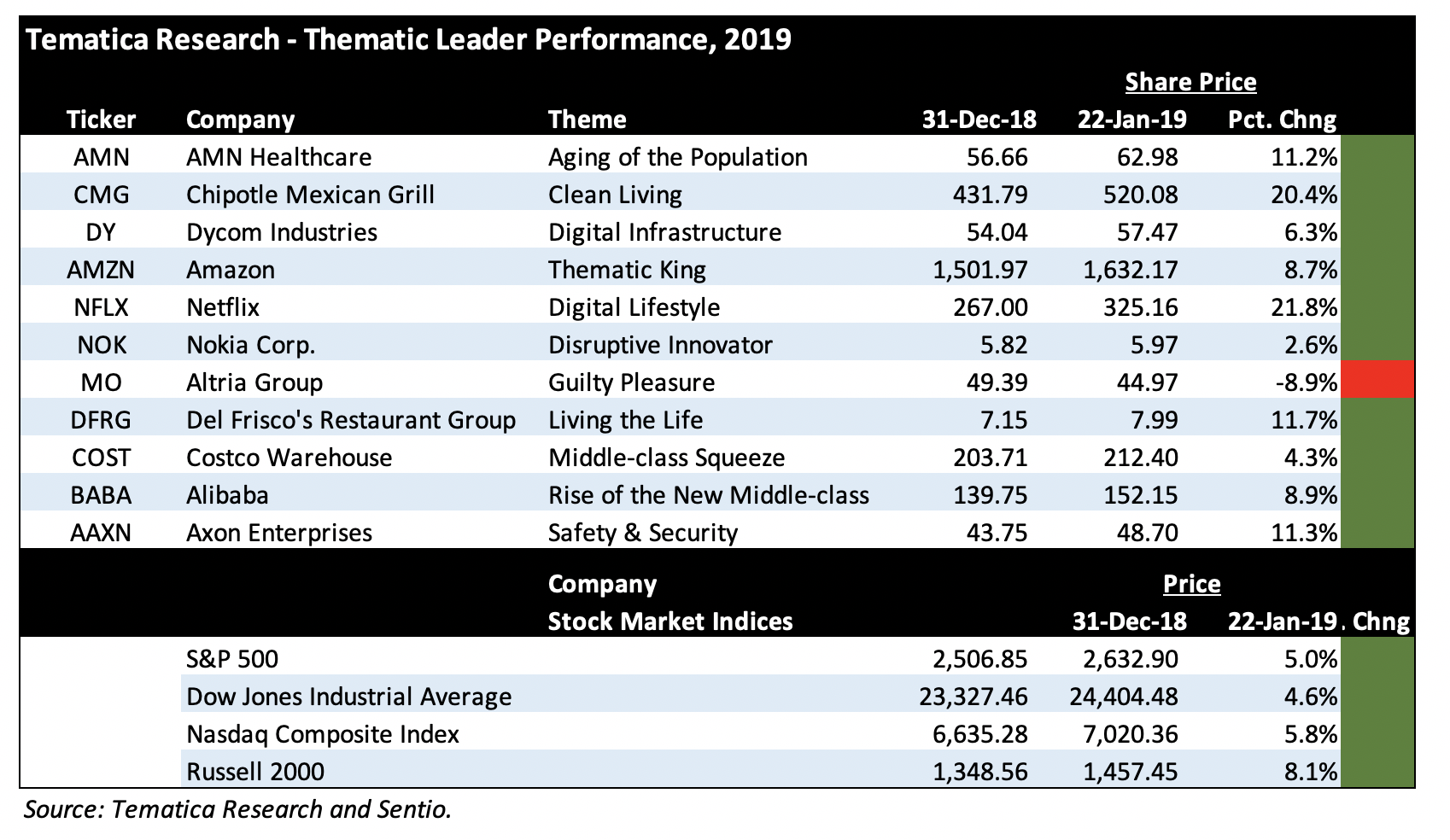 In last week’s issue I shared that I was putting shares of Guilty Pleasure company Altria (MO) on watch, and today we are closing out that position and removing it from the Thematic Leaders. Despite the enviable dividend yield, the shares are down some 9% thus far in 2019, which has brought the return over the four months or so to -24%. I’m opting to cut bait on this position to limit losses. As I shared last week, questions are growing as to how Altria can generate sufficient returns on its significant investment in Juul Labs (JUUL) while its core tobacco business continues to come under increasing pressure and the cannabis legalization at the federal level has yet to emerge in the US.

As we bid adieu to Altria, I’ll be examining our thematic database for a new Guilty Pleasure Thematic Leader.

While all the major market indices gave back a portion of last week’s gains, shares of mobile payment company USA Technologies (USAT) that resides on the Tematica Select List bucked that trend to eke out a modest move higher. The reason for that relative outperformance was a note from Barrington Research that argues the best option for the company is for it to be sold. In other words, it is calling for either a larger mobile payment or payment company or perhaps private equity to acquire USA Technologies. The thought process in the Barrington note cites USA’s internal investigation as well as the ensuing credibility gap, both of which are amply reflected in the shares. Barrington puts the takeout price on USAT shares between $10-$15.

What do I think?

Last week we added the shares back on the prospects for the company to deliver its internal investigation findings and delayed 10-K filing, changes in key personnel that should help restore management credibility, and the positive fundamentals in the core mobile payments business. In our view, that risk-to-reward tradeoff justified adding the shares back to the portfolio with a revised price target of $10. That target is subject to revision based on what we learn when the company provides any and all financial restatements.

Would USA Technologies make for sense for a buyer?

Yes, it would particularly as current share price levels that would allow either a strategic or financial buyer to scoop the business up on the cheap. A larger entity would also look to address the credibility issues that have arisen but would also have greater resources to grow the business. That said, in our experience buying shares in a company because it MAY be acquired is tricky at best. We’ll continue to focus on the fundamentals, which in this case are benefitting from the positive tailwinds associated with mobile payment adoption that is part of our Digital Lifestyle and Digital Infrastructure investment themes.

And for what it’s worth, Amsterdam based Oakland Hill BV just boosted its ownership stake in USAT shares to 6.13%, up from 5.58% this past September. While I don’t know Oakland, my thought is they too see what we do in USAT shares at current levels.