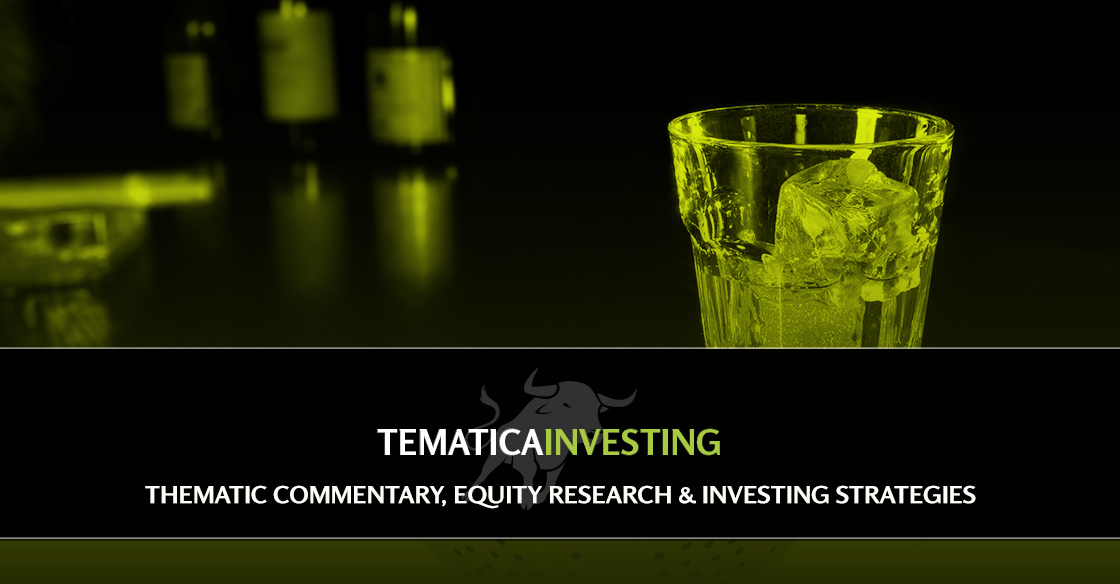 There are several notions as to what constitutes a guilty pleasure. One definition is something one enjoys but would be embarrassed to have others know, while another is enjoying something even though it may not be held in high regard or may not be good for you. As one might expect there are a number of guilty pleasures to be had, ranging from certain films and TV programs (like the Bachelor, but we don’t judge), products ranging from tobacco, alcohol and marijuana to fast food, coffee and sugary treats as well as gambling and video games.

Some may label these as “vice” stocks, but that category tends to be limited to alcohol, gaming and tobacco and has a pejorative connotation vs. the little affordable treats and pleasures that bring a moment of enjoyment and happiness as well as much needed relief at certain times. By their nature, these guilty pleasures are ones that people will consume no matter the tone of the economic environment. In other words, they tend to be inelastic goods, and more often than not the companies behind them tend to be characterized as healthy cash flow generators and dividend payers.

These companies and brands differ from our Living the Life investing theme in that the pleasure derived is not a function of the premium price or image, but rather simply from the product or experience itself. Part of the joy of owning a Prada bag is having others see it whereas a guilty pleasure may be and often is, enjoyed in private.

In our view, Tematica’s Guilty Pleasure investing theme, like all of our other investing themes, cuts across several traditional Wall Street industry sectors, as the concept focuses on those companies that bring the kinds of products that consumers won’t do without, regardless of the economic climate. With that in mind, it should come as little surprise that the guilty pleasure group of stocks held up well during the last two recessions and performed even better on a relative basis when compared to several stock market indices. A 2009, report by Merrill Lynch that examined the performance of tobacco, alcohol, and casino stocks during all of the recessions since 1970 found that while the broad S&P 500 fell by 1.5% on average, guilty pleasure stocks rose on average 11%. During the great tech meltdown, the broad market fell 20% between June 2001 and June 2002, but during that time tobacco stocks gained 8% and gambling related stocks nearly 20%.

The inelastic nature of the products produced by these guilty pleasure companies has enabled them to weather price increases better than other products and services that are considered to be more of a commodity in nature. Perhaps the best example is in the tobacco industry. Consider that while the domestic tobacco business is in a decline as more people become aware of the health effects of smoking on their well-being and taxes are raised each year on cigarettes, price increases more than offset the decline in volume consumption by customers. Another example: despite the increasing concern over sugar as part of our diets, chocolate companies like Hershey Co., have been able to pass through price increases to offset any combination of higher raw material, fuel, utilities, and transportation costs.

When the price of key inputs of these guilty pleasure products, (such as commodities like coffee, beef, sugar, or cocoa) decline after a period of upward movement , the combination of lower input costs and prior price increases tends to deliver better margins, profit generation, EPS growth and cash flow. Think about it … when was the last time you saw the price of a beverage at Starbucks or the price for a package of Oreos decline? Demand for these products is such that rising costs are passed onto the consumer, but declining costs don’t result in much downward pricing pressure. Your wallet and your taste buds know what we’re talking about…

Altria: A Guilty Pleasure stock and a dividend dynamo as well

As mentioned above, tobacco is universally known to be harmful, yet people continue to smoke in one form or another. The US tobacco market saw a slight decline in volume sales and a slight increase in value sales in 2017 as Americans slowly continued to reduce their tobacco consumption, perhaps in part due to our Clean Living investment theme, while producers increased prices to maintain profits.

Big Tobacco has long been under threat from the steady decline of smoking, particularly in the developed world. But in recent years, the industry has been able to push through price increases to make up for falling volumes — boosting both their profits and stock prices. Those profits and cash flow have allowed tobacco companies to invest in smoking alternatives (e-cigarettes, vape pens and other devices) that deliver nicotine without as many of the harmful effects that come with lighting up as well as return capital to shareholders in the form of share repurchases and increasing dividends.

One such stock that falls into that grouping is Altria (MO), which is best known for cigarettes (primarily the Marlboro brand that has 43% market share in the US) and smokeless tobacco products (Copenhagen, Skoal, Red Seal, and Husky brands) and to a lesser extent wine under the brands Chateau Ste. Michelle, Columbia Crest, and 14 Hands. In the US, Altria has commanded 50%-51% of the cigarette market over the last year, and while primarily known for that product category, in cigars, the company has a 26% share with its large machine-made Black & Mild brand. In smokeless products, it has 55% share with the Copenhagen (32%) and Skoal (19%) brands.

Digging into Altria’s financials, roughly 85% of its revenue and profits are drawn from the smokeable products business, with smokeless accounting for 11% of sales and growing, and 14% of its operating profit. What that tells us is the smokeless products are a higher margin business for the company, thus a continued shift toward that product line bodes well for Altria’s profits and cashflow. Rounding out the revenue and profit mix at just under 4% and 1%, respectively, is the company’s wine business. What that business mix analysis tells us is even though we may hear some talk of the non-smokeable product potential, at least in the near-term, Altria is a smokeable product company.

That means we can expect additional tobacco taxes and further cigarette price hikes. As we’ve seen in the past, that should translate into rising profits, continued share buybacks and dividend increases. Current consensus estimates have Altria achieving EPS of $4.35 in 2019, up from $4.05 this year and $3.39 in 2017. Helping those EPS comparisons, during the June 2018 quarter, Altria repurchased 7.6 million shares at an average price of $57.65 and exiting that quarter, Altria had slightly more than $1 billion remaining in the current $2 billion share repurchase program. Management signaled it expects to complete that program by the end of the second quarter of 2019. As simple math shows us, shrinking share counts do wonders for EPS and their comparisons.

In terms of dividends, Altria recently announced it was boosting its quarterly dividend by 14% to $0.80 per share from the prior $0.70 per share – offering up a dividend yield of just over 5.4%. That marked the 53rd increase in the company’s dividend since 1968, which qualifies the company as a dividend dynamo company – one that increases its dividend year in, year out. That increase tends to lead to a step function higher in the share price overtime, something we’ve witnessed time and time again with Tematica Select List resident McCormick & Co. (MKC). With Altria, this latest dividend increase puts its annual 2018 dividend at $3.00, up from $2.00 in 2014.

If we look at other Guilty Pleasure stocks such as Hershey (HSY), Molson Coors (TAP), Constellation Brands (STZ) and your choice of a gaming company, the dividend yield range is 1.7% to 2.9%. If Altria shares traded in that dividend yield band, it would result in a share price well north of $100. Historically Altria shares have traded in the average dividend yield range of 3.74% to 4.8% over the last several years, which would suggest upside to $81 and downside to $63, which is well above the current share price.

Even after this latest quarterly dividend increase, Altria’s dividend payout remains close to 73% based on expected EPS of $4.35 in 2019 (vs. $3.39 in 2017) leaving ample room for additional dividend increases in the coming years. For example, if Altria kept its dividend payout ratio intact and achieved expected 2020 EPS of $4.70, it could mean a quarterly dividend of more than $0.85 per share. That would imply a potential annual dividend in the range of $3.30-$3.40, and further upside to be had in MO shares over the coming several quarters.

That’s a Guilty Pleasure company worth holding onto, especially if it manages to further transform its business from a tobacco centric one to something more evenly divided between smokeable and smokeless products. There is also the likely prospect of Altria entering the cannabis space as the legal status of marijuana continues to expand in the US. In many ways that move is a natural extension of its existing skill set – tobacco growth, processing, packaging and distribution – and it fits with the guilty pleasure framework of Altria’s business focus.