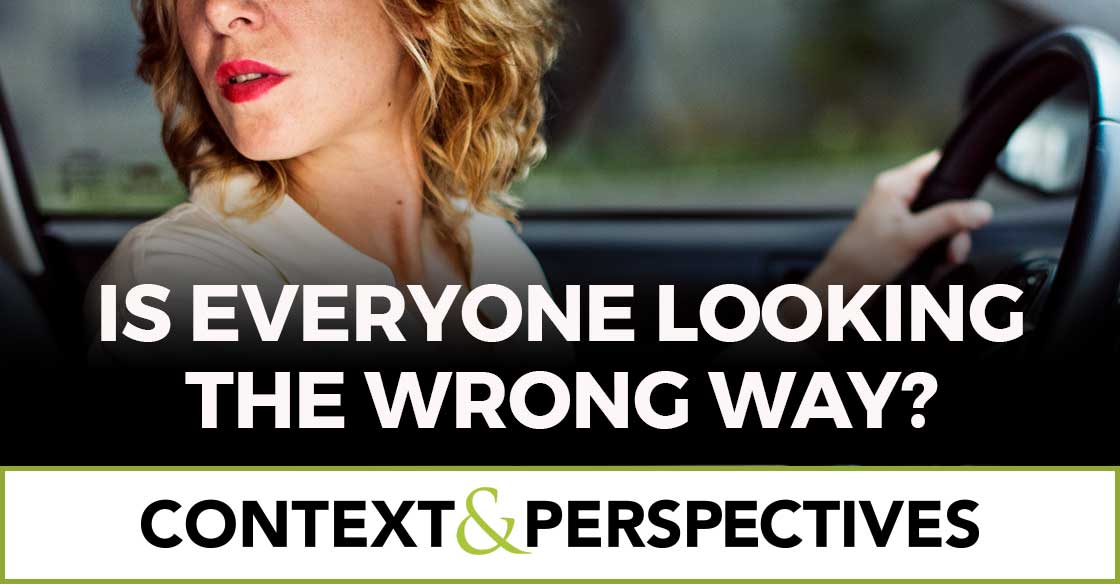 Over the past few months, the investing markets have considered Federal Reserve Chairman Powell enemy number one. Earlier this week the markets once again showed that America’s central bank drives sentiment more than any other factor, forget trade wars, forget earnings, forget political drama, it is the Fed and only the Fed that matters. That may sound somewhat simplistic to all the fundamental analysts and market technicians out there, but let’s face facts – it’s true.

Even the end of the 35-day long government shutdown barely generated a response from the markets.

What did generate interest was the rumor that the Fed may be considering ending its $50 billion-a-month drawdown of its balance sheet.

The afternoon of Wednesday, January 30th, after a much more dovish tone out of Powell, the stock market closed up for the first time after the past eight FOMC meetings – the longest post-FOMC losing streak on record. The prior meeting on December 19th was followed by a gut-wrenching 1,800-point crash in the Dow over the following four sessions. As we were nearing the end of 2018, it looked and smelled like the Fed went too far yet again, as it had done in 10 of the past 13 post-WWII hikes – so much for the narrative of the omniscient central banker. As Mark Twain wrote, “History doesn’t repeat itself, but it does rhyme.”

Investing is all about finding an inflection point, where the market is wrong – pricing an asset too high or too low, believing a policy to be beneficial when it isn’t or vice versa. Given the ubiquitous nature of the belief that the Fed is the central bank that really matters to the market, what if that supposition is wrong?

As Chris Versace and I wrote in our book Cocktail Investing, there are three major participants in an economy: consumers, business and government. To understand what is happening in an economy one needs to understand the vector and the velocity associated with each one of these participants.

Our Middle-Class Squeeze investing theme was again front and center this week in the domestic economy. This week we got a rather dour report on how the Household sector of the economy is feeling about the future with the University of Michigan’s monthly index of Consumer Sentiment, which gauges American’s view on their own financial condition as well as the economy in general. In January U.S. Consumer Confidence dropped to 90.7 versus expectations for 96.8, hitting an 18-month low despite initial jobless claims dropping to a 49-year low, likely thanks to the double-whammy of the partial government shutdown and the recent volatility in the financial markets. 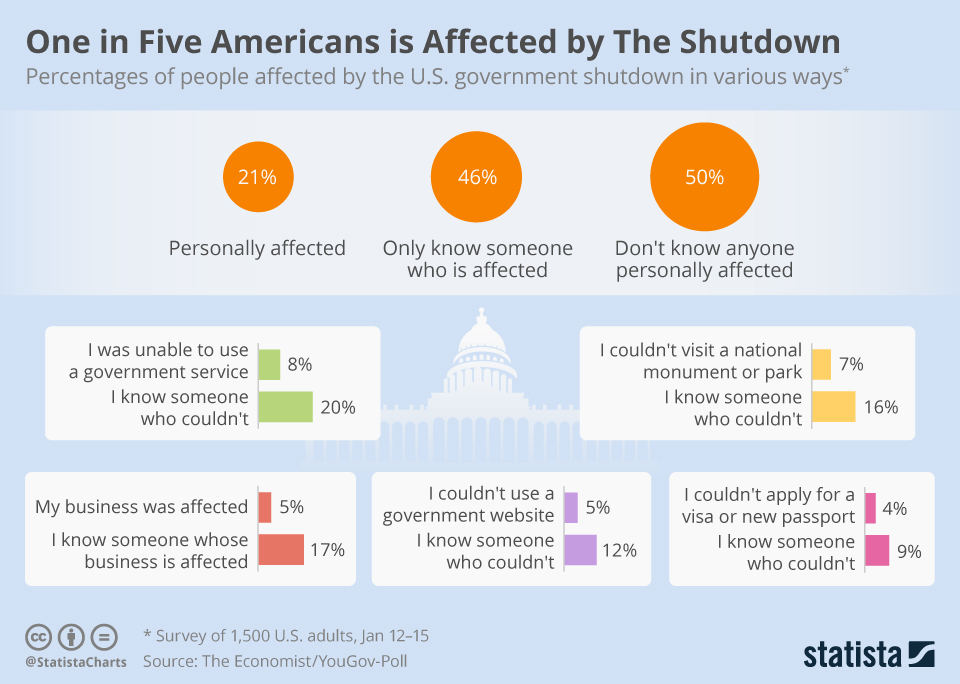 The decline was driven primarily by deteriorating expectations about the future, with that portion of the index declining 11% in January after falling 13% in December. On the other end of the spectrum, consumer’s assessment of current conditions is a mere 2% below the August peak which puts the spread between consumer’s outlook for the future and their present situation at nearly the largest since 1967. The only period in which the spread was greater was January through March of 2001 – the recession began in March 2001. Hat tip to David Rosenberg of Gluskin Sheff for the chart below. 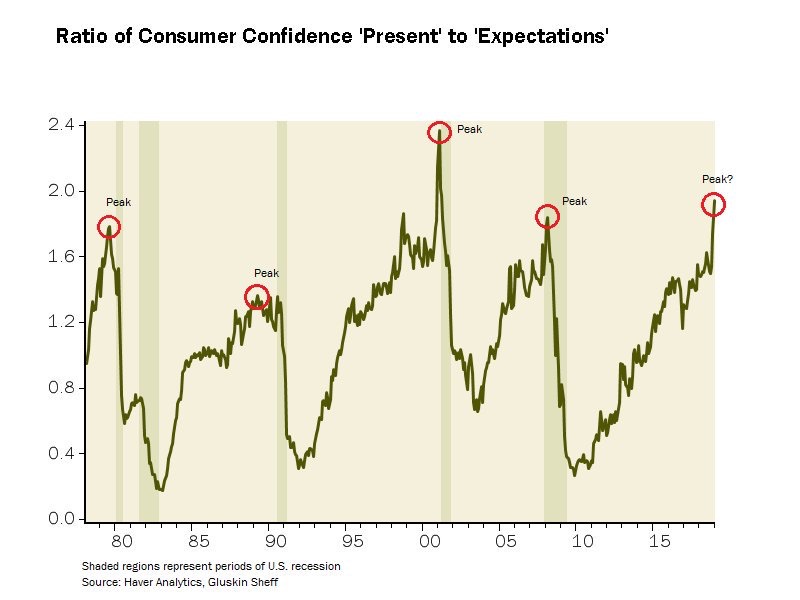 We will be watching this metric particularly closely in February as well as the February Manufacturing Index given the recent drop in the 6-month view.

The rather glum outlook continues to be a headwind to the housing sector. House sales, excluding newly built homes, fell by 10% in December compared with the same month in 2017, according to the National Association of Realtors. Interestingly, this sharp fall off occurred despite the late 2018 rollover in mortgage rates, which as any a home buyer knows makes for a lower cost of total home ownership.

We are knee deep in the December 2018 quarter earnings season with around one-third of the S&P 500 companies having reported so far with an aggregate increase of 14.2% in earnings per share on an increase of 5.6% in revenue. While that sounds pretty good at first glance, what concerns us is that the beat ratio so far is the lowest since 2014, despite having the second most aggressive estimate cuts in the months going into this season since the depths of the financial crisis. On top of that, expectations for 2019 are being materially scaled back with expected EPS growth having fallen to just 1.6% year-over-year in the March quarter, driven in large part by weakening revenues for those companies with a lot of international sales exposure. As we’ve heard from a growing number of companies over the last few weeks, they are feeling the pinch of the trade war as well as the strong dollar. 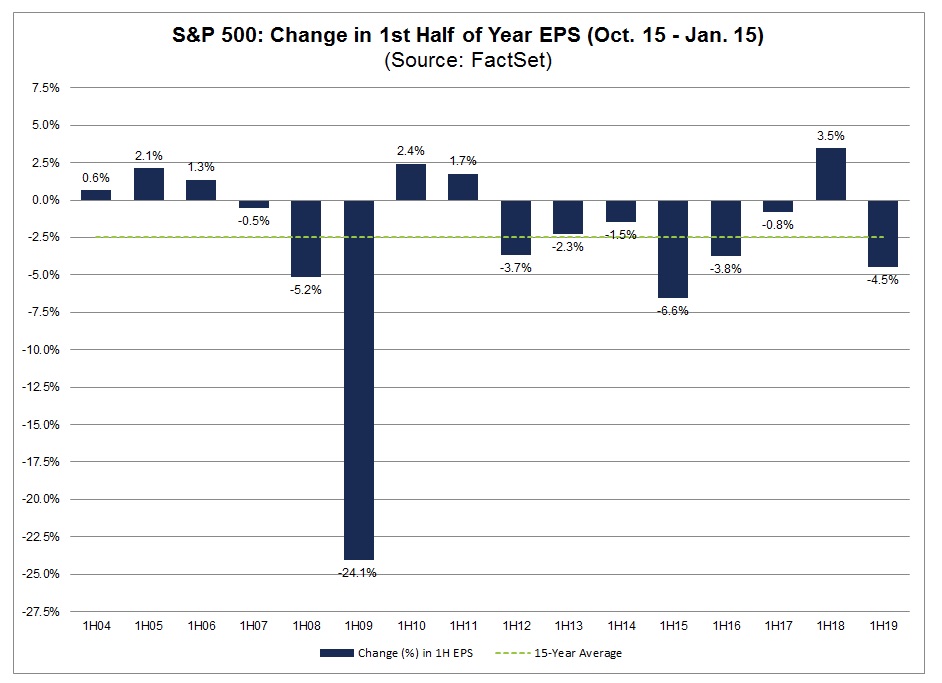 One theme that keeps rearing its head is the impact of weakness in China, which is no small matter given that according to the US Census Bureau, America’s exports to China have doubled over the 10 years through 2017 to reach $130 billion a year. Companies ranging from Caterpillar (CAT) to Apple (AAPL), NVIDIA (NVDA) to Stanley Black & Decker (SWK) and 3M (MMM) have commented on the impact of a Chinese slowdown.

Caterpillar expects its Chinese markets to be flat in 2019. NVIDIA reported weaker Chinese demand for its computer chips and gaming consoles. H.B. Fuller Co (FUL) reported that weaker demand from China will reduce its profits by $20 million this year. PPG Industries (PPG) reported sales of its coatings for cars made in China fell 15% in the December quarter.

Despite these declines, however, luxury goods associated with our Living the Life investing theme continue to boom in China according to LVMH-Moet Hennessy Louis Vuitton (LVMHF). During its earnings conference call, the company shared that “growth in China has accelerated in Q4 compared to the previous quarters and the beginning of this year is the same.” That strength was corroborated by Ferrari (RACE) that reported its sales in China, Hong Kong and Taiwan rose nearly 13% year over year in the December quarter, and forecasted a pickup in its China business during the first half of 2019. Some of this may reflect the non-US nature of those companies, but the more pronounced driver is more than likely demographic in nature as captured by the rising middle class in China and the allure of aspirational goods, but also the rapid rise in wealthy and ultra-wealthy Chinese, a key cohort when it comes to the Living the Life tailwind.

While the partial government shutdown has finally come to an end, at least temporarily, inside the beltway is increasingly looking like a kindergarten class that has missed its afternoon nap. The US federal deficit continues to be quite large compared to post WWII norms.

The sheer size of the federal deficit combined with the Federal Reserve program to reduce its balance sheet means that roughly $1.3 trillion is being pulled away from the private sector. The more money the government needs, which means increased Treasury bond supply, the less money is available to be spent in the private sector – this is referred to as the crowding out effect of large government deficits. The Fed’s actions along with the increase deficit spending are one of the factors behind the recent drop is equity prices as the money has to come from somewhere. Less money in the private sector means demand for private sector assets declines which impacts prices. What about China? Well, it is no longer a buyer of US debt and may well have become a net seller.

In 2017 the world’s leading economies accelerated in sync, boosting equity prices. In 2018 the U.S. economy surged on thanks in part to fiscal stimulus in the form of tax cuts and increased government spending while the rest of the world slowed. In 2019 the world looks to be once again syncing up to slow down. The IMF warned that “the global expansion is weakening and at a rate that is somewhat faster than expected”. The fund revised down its forecasts, particularly for advanced economies with the world’s economy forecast to grow by 3.6% in 2020. Although that is stronger than in some previous years, the IMF thinks “the risks to more significant downward corrections are rising”, in part because of tensions over trade and uncertainty about Brexit.

Italy has now had two consecutive quarters of contracting GDP, which means that technically Italians are breaking out the Barolo and sadly toasting to their latest recession. Germany, which has been the strongest economy in the Eurozone, saw its economy contract 0.2% in the third quarter of last year, its industrial production decline 1.9% in November, and retail sales crash 4.3% in December, sparking fears that the country is on the brink of a recession as well. Recent federal statistics have Germany’s economy growing by just 1.5% in 2018 versus 2.2% in 2017 with the IMF forecasting just 1.3% in 2019. According to data published by IHS Markit, France’s Composite Output Index that reflects its manufacturing and services economy remained in contraction mode at 47.9 in January, down from 48.7 in December. As a reminder, a reading below 50 indicates a contraction, while one above 50 indicates growth. Against that backdrop, it’s not shocking to read that European Central Bank President Mario Draghi say “The European Central Bank is ready to use all its policy tools to support Europe’s softening economy, including by restarting a recently shelved bond-buying program.” As for the U.K., consumer confidence with respect to the economic outlook fell to a 7-year low in January.

China has the second largest economy in the world and will soon replace the US as the world’s largest retail market as it benefits from the tailwinds in our New Global Middle Class investing theme. What happens in China matters to the rest of the world. For example, China has become the largest importer of wood in the world and the largest exporter of things made from wood, ranging from furniture to flooring. While China’s economy will eclipse that of the US, growth doesn’t come in a straight line and we are seeing warning signs:

As a result, China is letting up on its drive to deleverage its economy and Chinese investment into Europe and America fell by 73% in 2018. China has already pivoted towards more supportive economic policies. It has sped up spending on infrastructure, trimmed income taxes and relaxed some restraints on bank lending. China has a massive population that it needs to keep employed and was the world’s engine during the last financial crisis, providing a floor under demand as much of the rest of the world was crashing.

What If They Are Wrong?

We’ve already seen materially diminishing returns from Fed stimulus efforts in the past.

What if this time around the only central bank that truly matters is China’s?

What if China decides to alter its monetary policy, its peg to the dollar, to help its slowing economy thereby creating a cascade across the east as its neighbors scramble to respond?

What if the only bank in the world that can affect asset prices this time, that can actually create inflation is the one for the biggest consumer of raw materials in the world, the one in the East at the People’s Bank of China while everyone is looking the other way?

How many investors are factoring that into their thinking? Is President Trump contemplating that as US-China trade talks continue? We’ll be watching so stay tuned.