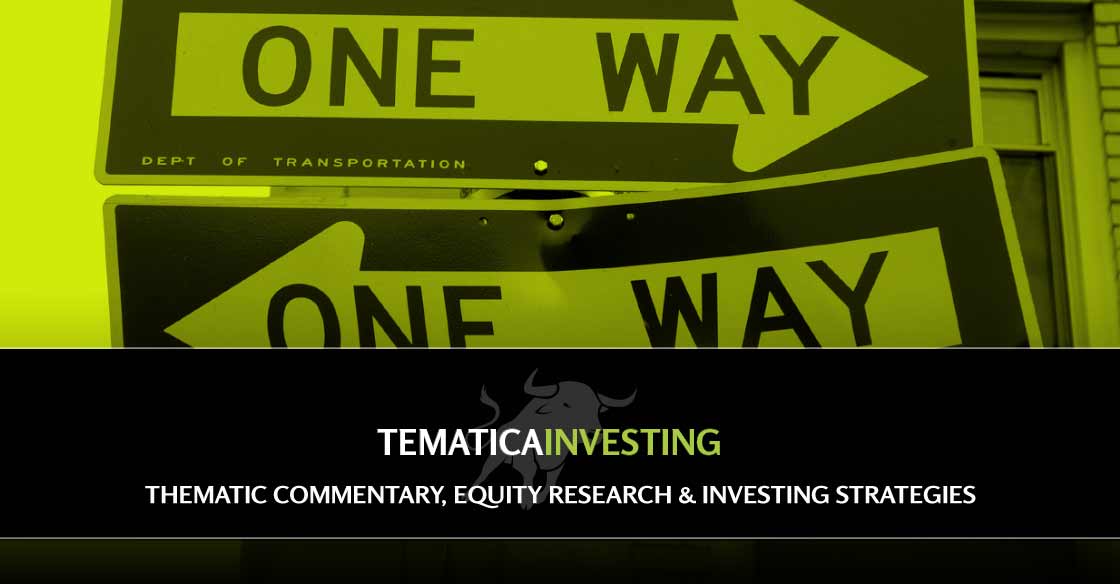 Despite the strong finish to the June quarter, in my view, three risks remain aheadthat the market needs to navigate during the second half of the year: the China trade war, earnings season and the Federal Reserve’s rate cut decision.

In recent missives, the U.S.-China trade negotiations, including the tariffs that are slowing the global economy, will likely impact June quarter earnings season, lead to further negative revisions of S&P 500 expectations in the back half of the year, and may prompt the Fed not to be as accommodating as has been expected.

While the U.S.-China trade talks will likely be tracked in terms of months, the other two risks will be ones we face in the coming weeks. June quarter earnings season kicks off this week, with results from PepsiCo Inc. (PEP) and newly public Levi Strauss & Co. (LEVI), and the Fed’s next monetary policy meeting is set for July 30-31. As we saw, last night Levi Strauss (LEVI) modestly missed expectations, but it was the profit warning from German chemical company BASF SE that reminded investors of the impact to be had in the June earnings season from both the slowing global economy, including weakening auto demand,and trade conflicts trade. As I said on this week’s Thematic Signals podcast, I seriously doubt BASF SE will be the only company to cite those factors as they dial back their expectations for the second half of 2019.

Later today, some three weeks before that Fed policy meeting, we’ll be hearing from Fed Chairman Jerome Powell during his semi-annual testimony in front of the House Financial Services Committee. These events can be a showcase for a lack of understanding among committee members when it comes to monetary policy, the economy and financial markets. However, the investment community will be watching and listening to Powell to see if he tips the Fed’s collective hand ahead of the end-of- July meeting.

On the somewhat sleepy Friday after the Fourth of July, the Fed published its latest Monetary Policy Report, which reiterated it is “firmly committed to fulfilling its statutory mandate from the Congress of promoting maximum employment, stable prices, and moderate long-term interest rates.”

Over the last several weeks we’ve talked about the downward vector and slowing velocity of both the domestic and global economies that have led to sharp gross domestic product forecast declines for the June quarter compared with the March quarter’s 3.1% reading. In perusing the Monetary Policy Report, there is little question the Fed has taken note of this as well, noting that “… consumer spending in the first quarter was lackluster but appears to have picked up in recent months. Meanwhile, following robust gains last year, business fixed investment slowed in the first quarter, and indicators suggest that investment decelerated further in the spring. All told, incoming data for the second quarter suggest a moderationin GDP growth — despite a pickup in consumption — as the contributions from net exports and inventories reverse and the impetus from business investment wanes further.”

In the report, the Fed went on to state the following, which reiterates the dovish comment Powell made at the Fed’s last monetary policy press conference, the same remarks that rallied the stock market in June: “At its meeting in June, the FOMC judged that current and prospective economic conditions called for maintaining the target range for the federal funds rate at 2 1/4 to 2 1/2 percent. Nonetheless, in light of increased uncertainties around the economic outlook and muted inflation pressures, the Committee indicated that it will closely monitor the implications of incoming information for the economic outlook and will act as appropriate to sustain the expansion, with a strong labor market and inflation near the Committee’s symmetric 2 percent objective.”

The thing is, up until last Friday’s better-than-expected June Employment Report, the market had been expecting not one but a few rate cuts in the back half of 2019. Now, per the latest CBOE FedWatch details, the market still thinks there is a better than 90% chance the Fed will cut interest rates by a quarter pointin 22 days, but the probability of additional cuts in the coming months has fallen dramatically. Based on the latest probability tables published by CBOE, it looks like the market is now expecting only one more rate cut before the end of 2019. As we saw on Friday and again Monday, the market had to adjust to that new mindset by giving back some of its June gains.

Adding fuel to the fire, the New York Federal Reserve on Monday published a report indicating a pickup in expected inflation a year from now and three years from now to a rate of 2.7%, up from 2.5% and 2.6%, respectively, in the previous report. This inflation uptick goes against one of the prevailing thoughts behind why the Fed’s recent dovish comments — the lack of inflation — and is potentially another item that could put a Fed rate cut on the back burner in the near term, thus bucking what the stock market has been thinking.

As we dissect Powell’s comments later today, we’ll be looking to see if he maintains the dovish posture he showed in June or if he will attempt to roll back that stance following the June jobs report and the New York Fed’s inflation findings. If it’s the latter, we can likely expect Powell to trot out the standby Fed comment that it will remain “data-dependent.” If Powell does jawbone a likely pushout, it likely means the market pressure of the last few days will continue, and for that, we have the inverse ETF position on the Select List that should help insulate us.

Over the last few days, I’ve updated the performance for both the Thematic Leaders as well as the positions on the Select List, and I have to say there is no shortage of ones beating the domestic stock market year to date. But I also recognize that is the rear-view mirror view and as investors we want to be focused on the road ahead.

In recent weeks, I’ve shared here and on the Thematic Signals Podcast the upcoming earnings season will be, in my view, one of the more challenging ones we’ve faced. So much so that as we were approaching the end of the June quarter, I purposely set stop loss levels across all of the live positions at both the Thematic Leaders and the Tematica Select List.

And while the near-term is likely to be challenging, there are longer-term reasons to be bullish on many, if not all of those positions. For example, recent chatter points to Apple (AAPL) offering three new iPhone models in 2020 that have organic light emittingdisplays, which bodes rather well for our Disruptive Innovators Universal Display (OLED) shares. Yesterday, Digital Lifestylecompany AT&T (T) formally unveiled its Netflix (NFLX) rival will be called HBO Max, and like Netflix, it will feature a combination of past programming from the Time Warner library and new proprietary content as well. HBO Max will launch publicly in the spring of 2020, but ahead of that, I expect AT&T will unveil the service at an upcoming analyst day, similar to what Disney (DIS) did with Disney+…. And we know how that popped DIS shares. I expect the same to happen to T shares as Wall Street revisits its valuation framework for the company.

The Cleaner Living Index: Up 6.5% in June

As you know we recently debuted the Tematica Research Cleaner Living Index, which reflects the companies whose business models are riding the tailwinds of our Cleaner Livinginvesting theme. You also know that shortly before the July 4th, Independence Day holiday, we closed out the month of June, which also shut the books on the second quarter of 2019. As I mentioned above, the Fed’s dovish comments exiting its June 18-19 monetary policy meeting buoyed the stock market leading to one of the best month’s performance in some time with the major domestic stock market indices up between 6.9%-7.4%. That move brought the returns for those indices to 16.2%-20.7% for the first half of 2019.

For the first half of 2019, the Cleaner Living Index rose 8.1%, with the majority of that gain had in the first three months of the year. Retracing the second quarter’s performance, as with the overall domestic stock market, the Cleaner Living Index gave back all of its April gains and then some during May, but rallied during in June following the dovish Fed comments to eke out positive performance for the quarter. Driving that first halfperformance, 28 of the index’s 48 constituents climbed more than 10% during the first half of the year with JinkoSolar (JKS) and Sunrun (RUN) leading the pack with their 119% and 72% returns.

Offsetting those gains, 14 constituents came under pressure led by Tenneco (TEN), down almost 60% for the first half of 2019, and National Beverage Corp. (FIZZ), which saw its shares fall 38%.  Shares of auto parts company Tenneco came under pressure following the company’s slashing of its 2019 guidance due to the weakening global automotive market, particularly in China. The drop in National Beverage is the result of both weakening sales that reflect the increasing competitive flavored seltzer market expectations and consumer concerns following a class-action lawsuit claiming its ingredients are not all-natural that pressured earnings.

As we move deeper into the back half of 2019, we’ll continue to monitor developments at National Fizz and Tenneco to determine their continued suitability for the Cleaner Living Index based on its underlying selection criteria. We will also scrutinize newly public companies to determine the degree to which their business models may be riding the Cleaner Living tailwind in a meaningfully way. It was that determination that led Beyond Meat (BYND) shares to be added to the index during our semi-annual June reconstitution.