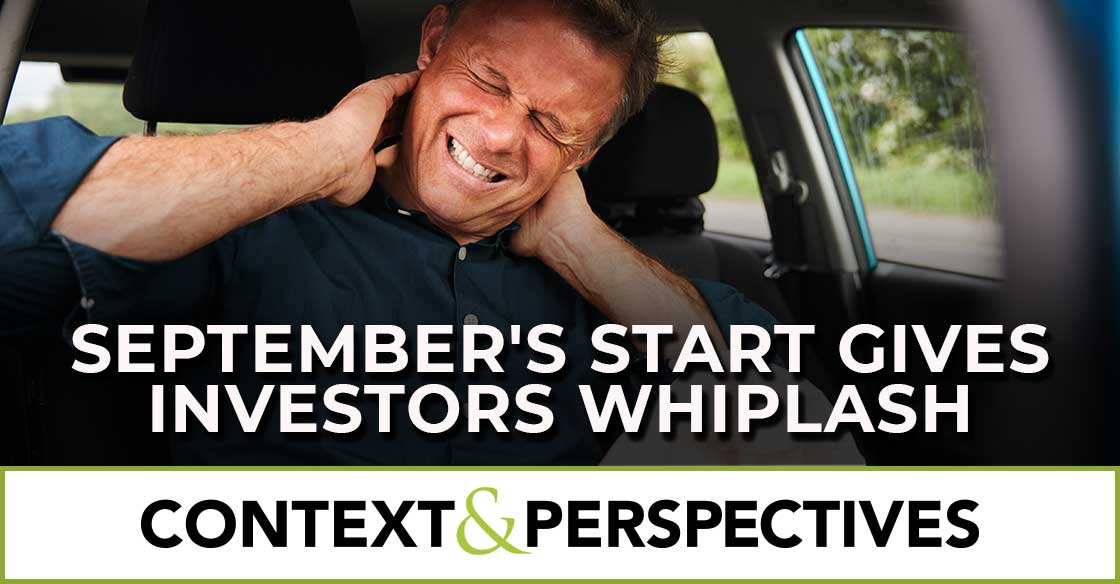 The markets closed last week in a bullish mood on the news that (stop me if you’ve heard this one before) the US and China will be back at the negotiating table in October. You don’t say! Oh but this time we have schedules and a list of attendees so it is totally different.

The past three days of bullishness have been in sharp contrast to the chaos of August during which global stock markets lost around $3 trillion in market cap thanks to the ongoing trade wars and more data pointing to global slowing. As of Friday’s close, over the past year, the S&P 500 is up 3.7%, the Nasdaq 2.5%, Dow Jones Industrial Average up 3.4%, the NYSE Composite Index up 0.17% and the Russell 2000 is down -12.1%. During August 2,930 acted as a resistance level for the S&P 500 multiple times, but the index managed to break through that level last week, which is typically a bullish signal.

As the markets have taken an immediate about-face on the reignited hopes for progress in the trade wars, we’ve seen a profound flip-flop in equity performance which gave many a portfolio whiplash.

While corporate buybacks have been a major source of support for share prices in recent years, corporate insiders have been big sellers in 2019 selling an average of $600 million worth of stock every trading day in August, per TrimTabs Investment Research. Insider selling has totaled over $10 billion in five out of the first eight months of 2019. The only other time we’ve seen so much insider selling was in 2006 and 2007.

August saw an additional $3 trillion of bonds drop into negative territory. We are now up to $17 trillion in negative-yielding bonds globally, with $1 trillion of that corporate bonds – talk about weak growth expectations! We also saw the yield on the 30-year Treasury bond drop below the dividend yield for the S&P 500 recently. The last time that happened was in 2008.

The yield on the 10-year Treasury dipped below the 2-year multiple times during the trading day in August but closed for the first time inverted on August 26th. August 27th the spread between the 10-year Treasury yield and the 2-year rate fell to negative 5 basis points, its lowest level since 2007. Overall the yield on the 10-year Treasury note fell 52 basis points during the month of August – that’s a big deal. The last time we saw a fall of that magnitude in such a short period of time was in 2011 when fears of a double-dip recession were on the table. Currently, the real yield on US 10-year is sitting in negative territory which says a lot about the bond market’s expectations for growth in the coming years. Keep that in mind as you look at the PE multiple for the S&P 500 after having two consecutive quarters of contracting EPS.

A growing number of countries have their 10-year dropping into negative territory:

The US is now the only nation in the developed world with any sovereign rate above 2% (h/t @Charlie Bilello). My bets are that we are the outlier that won’t stay an outlier indefinitely.

Recently the Italian 10-year bond dropped to new all-time lows as Cinque Stelle (5 Star) movement managed to team up with the center-left Democratic Party of former Prime Minister Matteo Renzi. Don’t expect this new odd-couple coalition to last long as these two parties have basically nothing in common save for their loathing of Matteo Salvini and the League, but for now, the markets have been pacified. These two parties detest one another and were trading insults via Twitter up until about a month ago. This marriage of convenience is unlikely to last long.

The European Central Bank meets on September 12th, giving them one week head start versus the Federal Reserve’s Open Market Committee meeting, which is September 17th & 18th, kicking off the next round of the central bank race to the bottom. The ECB needs to pull out some serious moves to prop up Eurozone banks, which are near all-time lows relative to the broader market. We’ll next hear from the eternally-pushing-on-a-string Bank of Japan on September 19th.

Dollar Strength continues to be a problem across the globe. The US Trade Weighted Broad Dollar Index recently reached new all-time highs, something I have warned about in prior Context & Perspective pieces as being highly likely. It’s happened and this is big – really big when you consider the sheer volume of dollar-denominated debt coming due in the next few years and that this recent move is likely setting the stage for significant further moves to the upside.

In the context of the ongoing trade war with China, the renminbi dropped 3.7% against the dollar in August, putting it on track for the biggest monthly drop in more than a quarter of a century as Beijing is likely hunkering down for a protracted trade war with the US, despite what the sporadically hopefully headlines may say.

Make no mistake, this is about a lot more than just terms of trade. This is about China reestablishing itself as a major player on the world stage if not the dominant one. For much of the past two millennia, China and India together accounted for at least half of global GDP. The past few centuries of western dominance have been a historical aberration.

As the uncertainty around Brexit continues to worsen (more on this later), the British pound last week dropped to its lowest level against the dollar in 35 years, apart from a brief plunge in 2016 likely for technical reasons.

The US economy continues to flash warning signs, but there remain some areas of strength.

That nation that has been the region’s strongest economy is struggling as the fallout from the US-China trade war expands around the world.

The rest of Europe continues to weaken.

The challenge for anyone negotiating terms for Brexit with the Eurozone basically comes down to this.

Understanding this impossible reality, here is what to expect in the coming weeks.

For those who may not be convinced that this is a material problem, this is an estimate of the impact of a hard Brexit on the Eurozone alone.

Around 70% of the world’s major economies have their Purchasing Managers Index in contraction territory (below 50) – that is a lot of slowing going on. Much of the world is drowning in debt with excess productive capacity – a highly deflationary combination.

We are witnessing a major turning point in the global economy and geopolitical landscape. The past 60 post-WWII years have primarily consisted of US economic and military dominance, increasing levels of globalization and relatively low levels of geopolitical tension.

Today we are seeing a shift away from an optimistic world of highly interconnected global supply chains towards one driven by xenophobia and nationalism. We are seeing rising economic and political tensions between not only traditional rivals but also between long-term allies. In the coming decades, the US economy will no longer be the singular global economic and military powerhouse, which will have a material impact on the world’s geopolitical balance of power.

The big question facing investors is whether the US and much of the rest of the world are heading into a recession. Many leading indicators that have proven themselves reliable in the past indicate that this is highly likely but today really is different.

Will central bankers be able to engineer a way to extend this expansion? No one who is intellectually honest can answer that question with a high level of confidence as we are in completely uncharted territory. This means investors need to be agile and put on portfolio protection while it remains relatively cheap thanks to historically low volatility levels.

I’ll leave you with a more upbeat note, my favorite headline of the week.