While the headlines have been all about the Republicans proposed replacement for the Affordable Care Act (aka Obamacare), the Atlanta Fed issued their latest forecast for first quarter GDP, which has been lowered yet again and is now sitting near stall speed at 1.3 percent.

We also saw signs of slowing from across the Atlantic where in a major blow to the acceleration narrative in Europe, German Factory orders plunged 7.4% in January, the biggest sequential decline since the financial crisis and the second-largest sequential decline on record. (Hat tip to Bespoke Institutional for the chart) 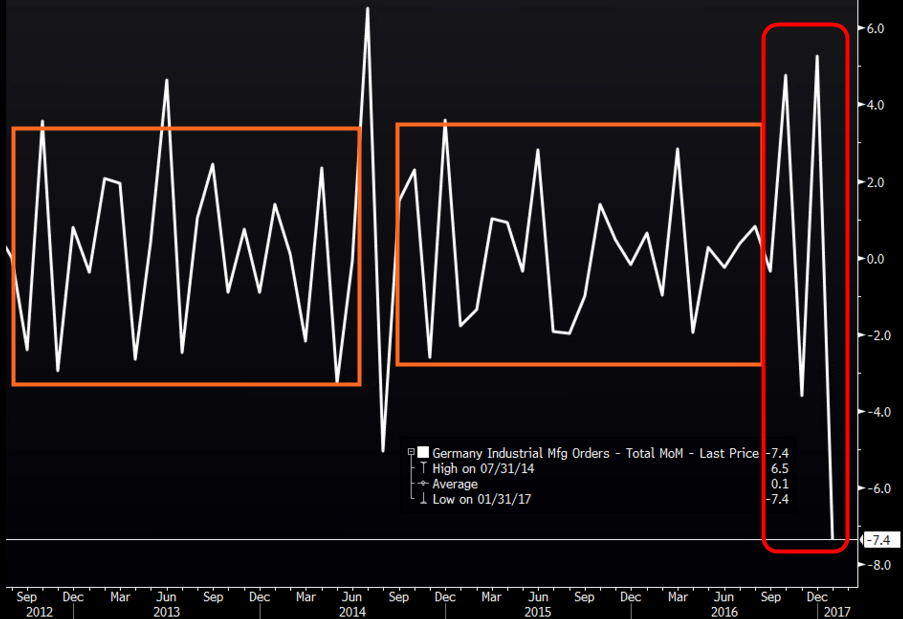 We are also watching nerves get a bit tigher on the global stage following Sunday night’s test of North Korean ballistic missiles. In response, the U.S. military is deploying its Terminal High Altitude Area Defense system (THAAD) to South Korea. This is strictly a defensive weapon, but be on the watch for a reaction to China that may see this as more of an offensive move.

Why care about such a military move? With the Atlanta Fed forecasting weaker Q1 GDP, signs of weakness in the Eurozone and now rising global tensions, Fed Chair Janet Yellen and her Committee have a lot to contemplate as they discuss a potential rate hike this month.

If all that didn’t get your attention, the OECD just released a report today in which they warned that the

In financial markets, there are apparent disconnects between the positive assessment of economic prospects reflected in market valuations and forecasts for the real economy. Equity valuations have increased significantly further in many major markets over the past six months, despite the large rise in nominal interest rates and with long-term nominal and real GDP growth expectations based on consensus forecasts barely changed. Expectations for corporate earnings growth in the euro area and the United States have also not been revised up over this period.

The report went on to further discuss the issues surrounding global trade.

A roll-back of existing trade openness would be costly, with a significant share of jobs in many countries linked to participation in global value chains. An increase in trade barriers in the major global trading economies – Europe, the United States and China – roughly equivalent to an average increase of tariffs to the bound tariff rates in 2001, the year when the trade negotiations under the Doha Development Round started, would have a major adverse impact on trade and GDP, particularly for those economies that imposed new trade barriers.

Turns out that quite a few folks are seeing disconnects and are concerned that anti-trade measures have the potential to be harmful to growth.