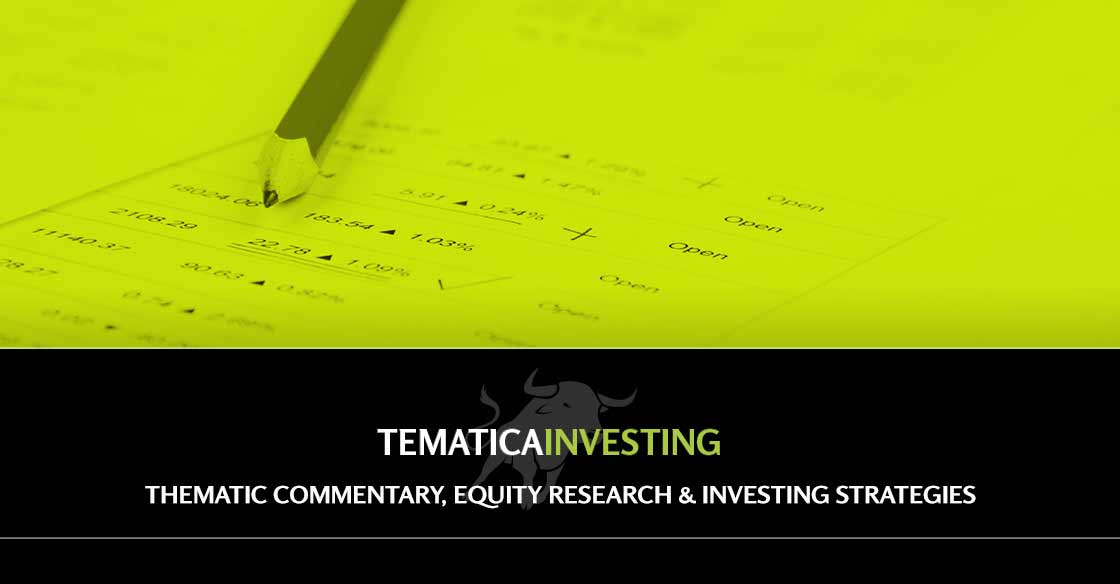 Stocks rebounded in a pronounced manner as we started off 2019, making it the best January showing since 1989. The data continues to point to a slowing global slowing economy, especially in China and in the eurozone with Italy in a recession and France not too far behind. The December-quarter concerns, however, have rolled back and propelled the market higher, especially during the last week of the month when the Fed signaled patience with its speed of further interest rate hikes. For the month in full, the S&P 500 finished up just shy of 8.0%, ahead of the Dow Jones Industrial Average’s 7.2% rise, but trailing the tech-heavy Nasdaq’s 9.7% surge.

On top of Friday’s blockbuster January Employment Report, a stronger-than-expected ISM Manufacturing Index reading for January came in, which showcased a rebound in new order activity. On the back of those two reports, the domestic stock market started February off in the green, as that data suggest the U.S. remains the brightest spot in the global economy. That view was supported by the January PMI data released Friday morning by IHS Markit, which showed the U.S. manufacturing economy picking up steam while that activity in the eurozone and Japan slowed, and China marked the second month in contraction territory. 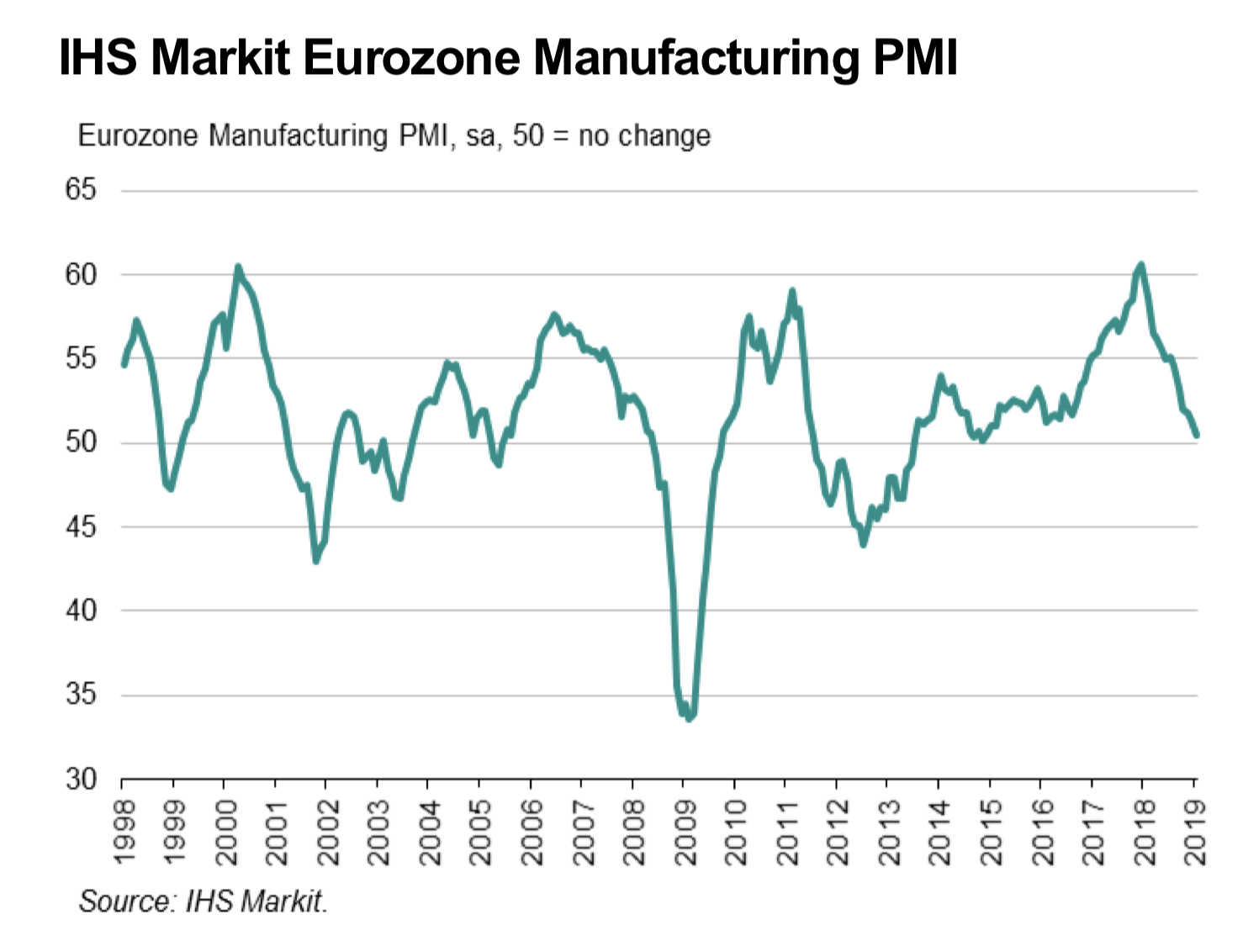 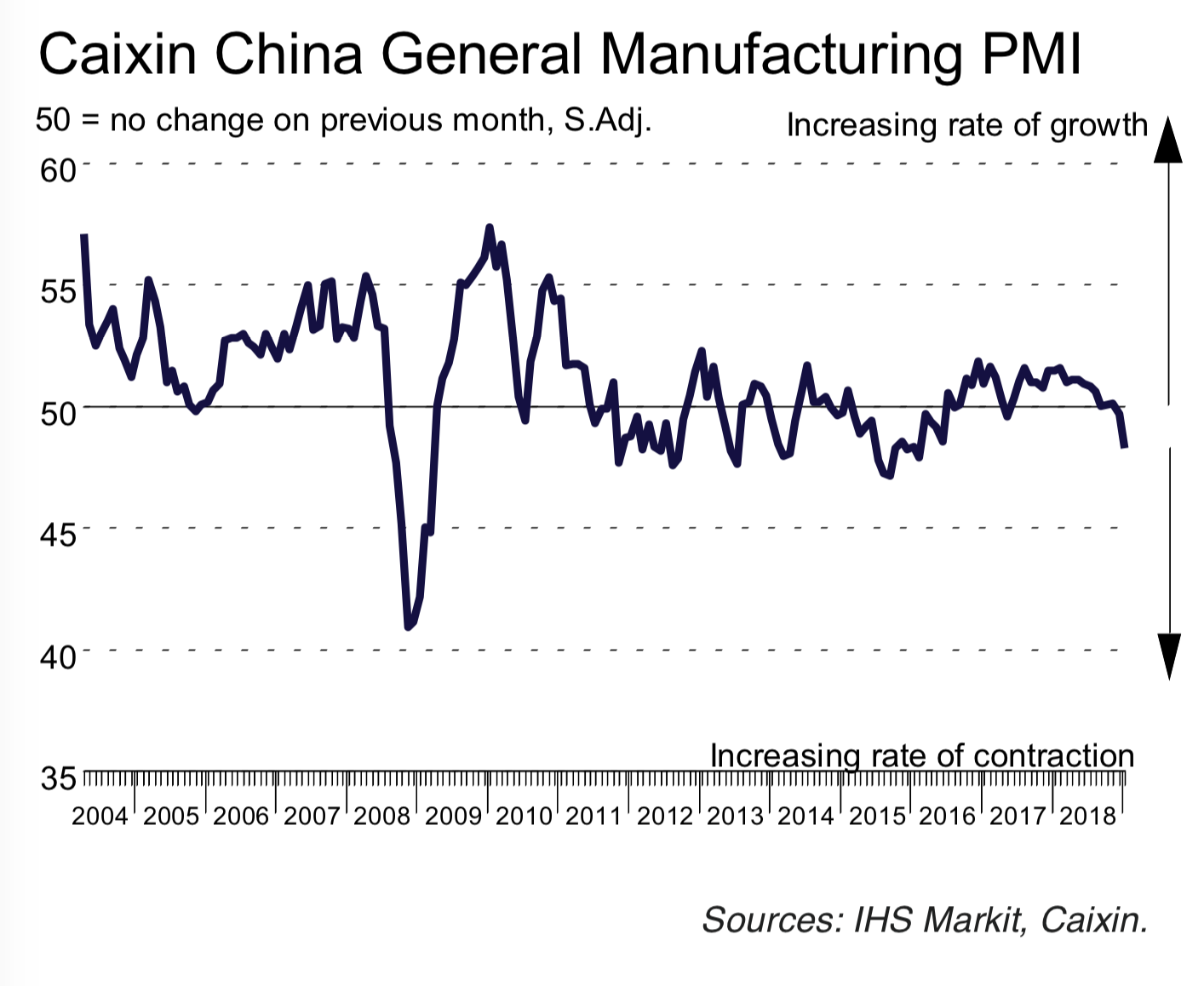 Another positive inside the ISM Manufacturing Report was the month-over-month drop in the Prices component. Pairing that with falling prices in the eurozone data, it’s another reason the Federal Reserve can take its finger off the interest rate hike button for the time being. That patient stance, shared by the Fed this week after its latest FOMC meeting, has walked the dollar back some, but as we see in the chart below the greenback’s year-over-year strength will likely continue to be a headwind for companies during the first half of 2019. 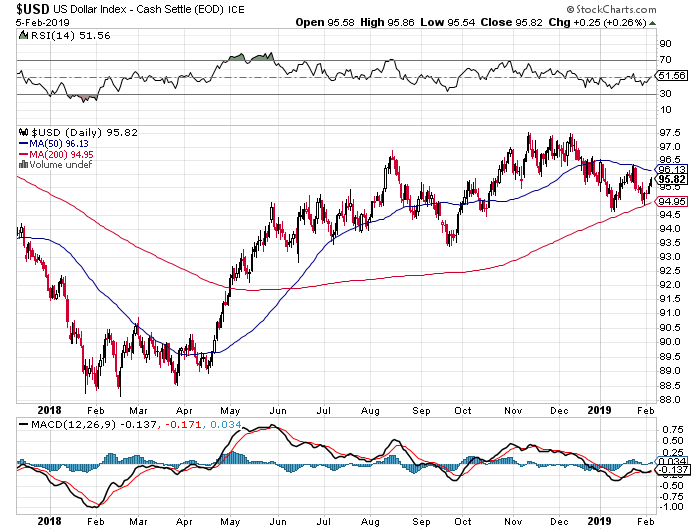 The current mismatch between U.S. economic data and that for China has raised hopes for U.S.-China trade talks. Also lending a helping hand on that front were several positive tweets from President Trump exiting this week’s round of trade talks. I remain cautiously optimistic but will once again remind subscribers it’s the details that we’ll be focused on when they are released.

As we move deeper into February, just over half of the S&P 500 companies have yet to report their quarterly results and given the slowing global economy and dollar headwinds we are likely to see further downward revisions to earnings expectations for the S&P 500 in the coming weeks. Along with the market’s push higher in January that has extended into February, should those revisions come to pass it means the market gets incrementally more expensive. This means we should continue to tread carefully in the near-term. 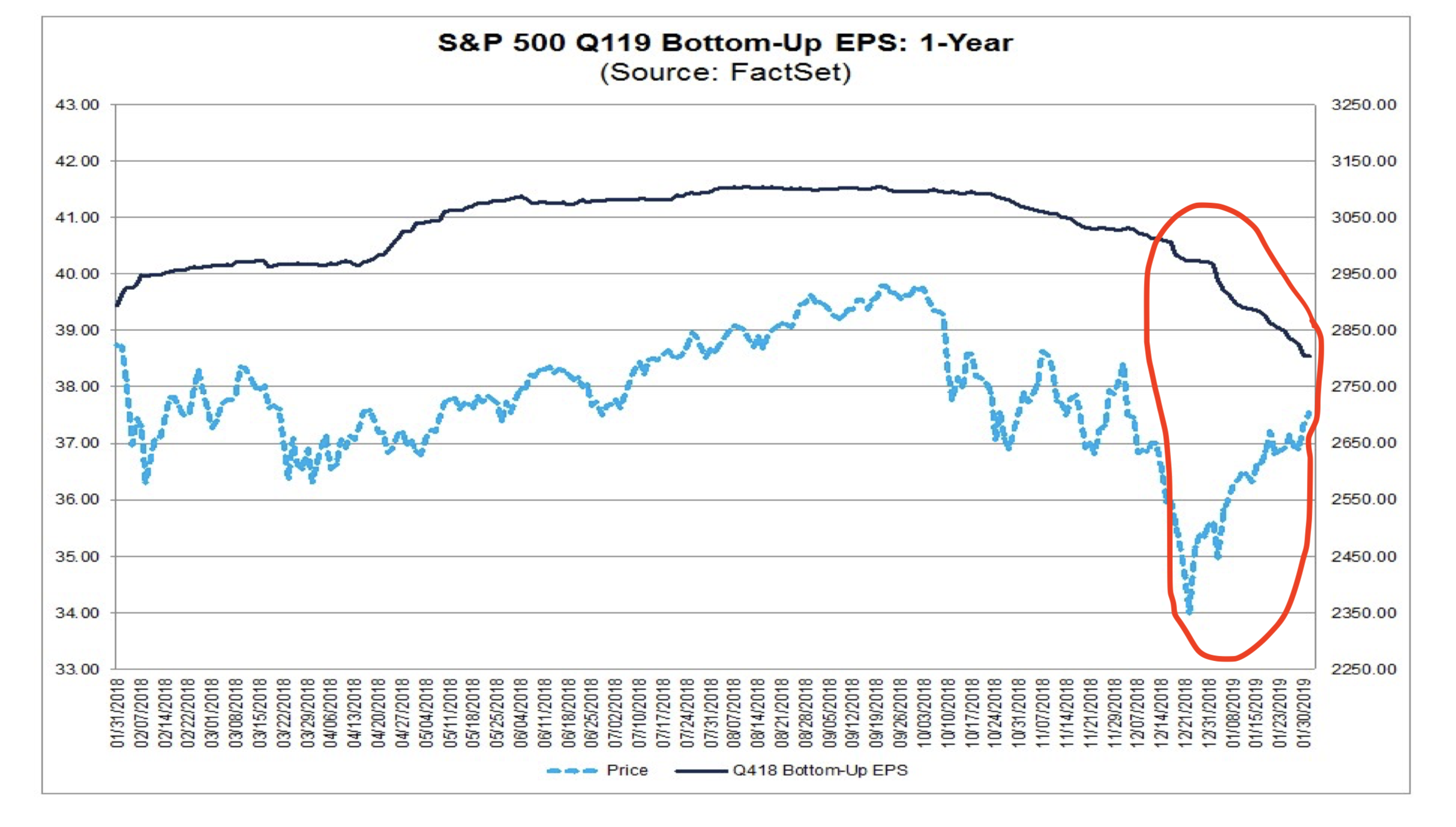 As we do this, known catalysts to watch in the coming weeks will be incremental developments on U.S.-China trade and potential moves by the European Central Bank. Following the weakening economic data in the eurozone, ECB President Mario Draghi said, “The European Central Bank is ready to use all its policy tools to support Europe’s softening economy, including by restarting a recently shelved bond-buying program.” There is also the possibility of another government shutdown should Congress fail to reach an agreement on immigration. Who said 2019 was likely to be boring? 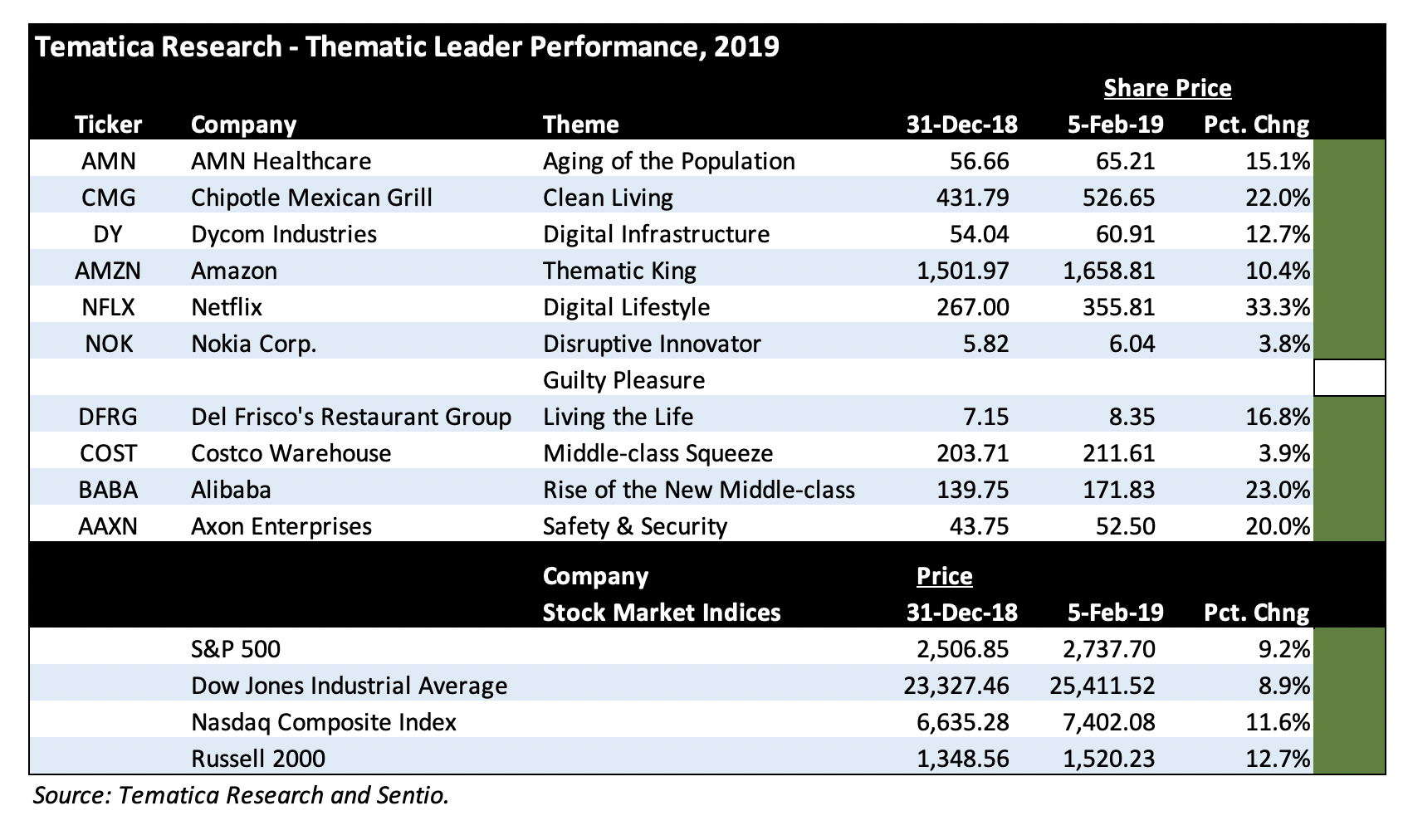 As I have said numerous times, we do not buy the market, but rather invest in companies that are well positioned to capitalize on the tailwinds from our 10 investment themes. From time to time, we are given opportunities to scale into existing positions and in my view, we are seeing that now with Thematic King Amazon (AMZN). The reason for this latest bout of weakness in Amazon’s share price is management’s comments that it will once again investment more than Wall Street expected and the news over e-commerce regulations in India.

From time to time we’ve seen Amazon step up its investment spending and historically its been a great time to load up on the shares because those investments have paved the way for future growth. From opportunities in grocery, mobile payments, streaming video and gaming services, healthcare following its PillPack acquisition as well as expanding the scale and scope of its Amazon Prime service further in the US and abroad, there are ample thematic opportunities for the Amazon business. I also suspect that with FedEx (FDX) looking to collapse order times to under 24 hours for its retail partners, that Amazon too is working on growing its Prime Now offering at the same time.

Let’s turn to the new e-commerce regulations in India and their potential impact on Amazon. The issue is that while these new regulations permit full foreign ownership of ‘single brand’ retailers such as IKEA, restrictions are in place with ‘multibrand’ stores such as supermarkets from outside India. Odds are we will see a rebranding of sorts by the likes of Amazon, Walmart (WMT) and others that are looking to tap into this New Global Middle-Class market. Candidly, given Amazon’s growing private label business that spans apparel, furniture, food, electronics, and other categories, I’m not all that bothered by this. And let’s face it, not only are the folks at Amazon pretty smart, but we have yet to see a market that shuns two-day delivery. I doubt India and its growing middle-class will be the first.

The bottom line with this Thematic King is it is a stock to own as the company is poised to further disrupt other markets, sectors and other business models in the coming quarters.

Del Frisco’s gets serious about entertaining take out bids

After a few weeks of no big news from Living the Life company Del Frisco’s Restaurant Group Inc. (DFRG) after it pre-announced its fourth-quarter revenue in early January, we have a new development that in my view reinforces our belief that the company is putting itself up for sale. More specifically, Del Frisco’s announced on Monday that it has executed a cooperation agreement with its third-largest shareholder, Engaged Capital — the same shareholder that criticized the management team in late 2018 and suggested the company examine its strategic alternatives.

Included in the agreement is the appointment of Joe Reece not only to the Del Frisco’s board but also as the Chairman of the Transaction Committee that is overseeing the company’s previously announced review of strategic alternatives. There are other conditions with the cooperation agreement, but it is the naming of Reece and the comments contained inside the accompanying press release that gives us some insight into his background. The comments read in part:

Glenn W. Welling, the founder and Chief Investment Officer of Engaged Capital, said, “I am pleased to have reached this agreement as part of a constructive dialogue with Del Frisco’s. In addition to his decades of experience working inside boardrooms, Joe Reece brings exceptional experience in investment banking and the capital markets to Del Frisco’s which will be instrumental as the Board evaluates the various opportunities available to maximize value for all shareholders.”

Joe Reece has over 30 years of experience as a business leader. His experience working with executives at corporations, financial sponsors, and institutional investors, as well as serving on several public company boards, will bring an added dimension to the Board.

Mr. Reece is the Founder and Chief Executive Officer of Helena Capital. Mr. Reece previously served as Executive Vice Chairman and Head of the Investment Bank for the Americas at UBS Group AG from 2017-2018 as well as serving on the board of UBS Securities, LLC.

More on Reece’s background is contained in the press release, but as the above excerpt notes, he has ample investment banking experience. In our view, the naming of Reece as chairman of the Del Frisco’s Transaction Committee means two things. First, the company is serious about examining alternatives to remaining a stand-alone company. Second, it is also serious about extracting the greatest value for its business and brands.

As shareholders, this news has increased my degree of confidence that a transaction, be it with private equity or a strategic partner, is likely to happen. As such, we will continue to keep DFRG shares as a Thematic Leader for the time being to capture these potential gains.