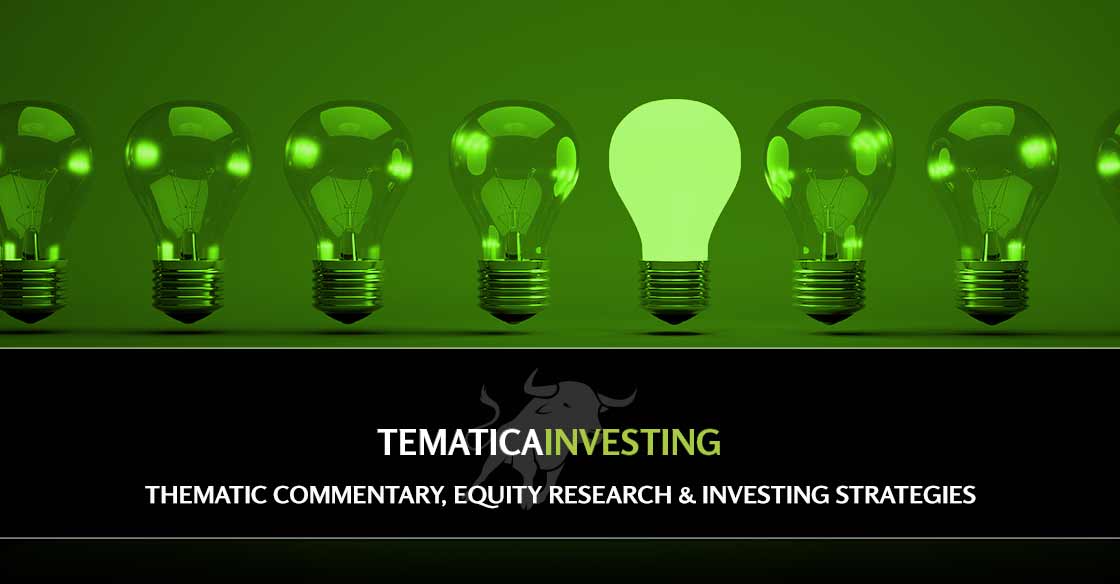 Over the last several days, volatility in the stock market has been rampant with wide swings taking place. Part and parcel of this has been a mood change in the stock market as high-flying stocks, including a number of technology ones, have come under pressure as investors re-think their growth prospects. That continued yesterday as shares of iPhone maker Apple (AAPL) became the latest one to dip into bear market territory with last night’s close following renewed concerns over the company’s device shipments in the near-term. This, in turn, has led to a few downgrades by Wall Street analysts, that at least in my view, are being somewhat short-sighted as the company continues to morph its business into one that is more reliant on high margin services rather than just the iPhone.

The same can be said with Amazon (AMZN), which has seen its shares tumble despite there being no slowdown in the shift to digital commerce as evidenced by the October Retail Sales Report. That report showed Nonstore retail sales for the month climbing just shy of 3x as fast as overall retail sales year over year. That was certainly confirmed in the latest earnings reports this week from Macy’s (M) and Walmart (WMT).  All indications, as well as expectations, have this aspect of our Digital Lifestyle investing theme accelerating into the all-important holiday shopping season. And yes, this keeps me bullish on our shares of United Parcel Service (UPS)

Now here’s the tough part to swallow – while we and our thematic way of investing are likely to be right in the medium to long-term, the mood in the stock market tends to prevail in the short-term. And with several of the concerns I’ve talked about here as well as in Tematica Investing and on our podcast, Cocktail Investing, rearing their heads odds are the stock market will continue to be a volatile one in the very near-term. This will likely see the current expectation resetting continue, especially for the sector-based investor view of “technology” stocks. Talk about a multi-headed sector that is simply a mish-mash of things – I’ll stick to our thematic lens approach, thank you very much. That said, with “tech” being in the doghouse, I’m using the time to evaluate a number of companies for the currently open Disruptive Innovators slot in our Thematic Leaders. Some of the current contenders include cloud-focused companies Dropbox (DBX), Instructure (INST) and Okata (OKT) among others.

What’s been driving the latest round of roller coaster like thrills in the stock market can be found in the intersection of the latest earnings reports, economic data, and political developments. From sector investing perspective, we continue to get mixed results as evidenced by this week’s earnings reports as JC Penney (JCP) lagged expectations while Walmart (WMT) and Macy’s (M) beat them. From a thematic one, however, we see the dichotomy in those results as strong confirmation in our Digital Lifestyle investing theme as both Macy’s and Walmart delivered strong digital shopping performance in those quarterly reports, while JC Penney continues to struggle with its brick & mortar business.

And while the Living the Lifestyle Thematic Leader that is Del Frisco’s (DFRG) reported a sloppy quarter following the disposal of its Sullivan’s business, the company shared a vibrant outlook, including the plan to grow its revenue and EBITDA to at least $700 million and $100 million by, respectively, by 2020 from the September quarter run rates of $420 million and $74 million, respectively. The intent on average will be to roll out two to three Double Eagles, two to three Barcelona Wine Bars and six bartacos restaurants each year, which is a measured move over the coming years and one that could be scaled back quickly should the domestic economy begin to falter several quarters out.

Near-term, Del Frisco’s should benefit from a pick-up in activity quarter to date following the arrival in the third quarter of its new chief marketing officer. On the earnings conference call, management shared Double Eagle’s private dining is up almost 20% in the first few weeks of the quarter and bookings for the rest of the quarter are up more than 20% compared to last year at this time.

The company also confirmed one of the key aspects of our investment thesis, which centers on margin improvement due in part to beef deflation. As discussed on the earnings call, the company’s total cost of sales as a percentage of revenue for the quarter decreased by 60 basis points to 27.3% from 27.9% in the year-ago period due to margin improvements at Double Eagle, Barcelona, and bartaco. This improvement and the year-over-year jump in bookings certainly point to the expected holiday inflection point panning out, which is also the most seasonally profitable time of year for Double Eagle and Grille. Cost-reduction efforts put in place earlier this year at these two brands should lead to visible margin improvement versus year-ago levels as the holiday volumes take effect.

Despite these positive signals and happenings, we have to remember there are several headwinds blowing on the overall stock market. These include Italy standing firm with its latest budget, which puts it at odds with the European Union; Brexit limping forward; inflationary readings in both the October Producer Price Index and Consumer Price Index that will more than likely keep the Fed’s rate hike path intact, a looming concern for consumer debt and high levels of corporate debt; and the pending trade talks between the US and China at a time when more data shows a cooling in the global economy.

On a positive note, the NFIB Small Business Index’s October reading continued the near-two year string of record highs with more small businesses than not citing a bullish attitude toward the economy and expanding their businesses. A note of caution here as most businesses tend to exude such sentiment at or near the economic peak – few see the looming the downside. The NFIB’s report once again called out the lack of skilled workers with 53% of those surveyed reporting few or no qualified applicants.

This signals potential wage pressures ahead, however, the sharp fall in oil prices, which follows the notion of the slowing global economy and rising inventory levels, is poised to give some relief to both businesses and consumers as we head into the holiday shopping season. Yes, average gas prices have fallen to $2.68 per gallon from $2.89 a month ago, but they are still up vs. $2.56 per gallon this time last year. When it comes to gas prices, most consumers think sequentially, which means they are recognizing the drop in recent weeks, which in their minds offers some relief.

Noticed, I said some relief – consumers still face high debt levels with larger servicing costs vs. the year-ago levels. And let’s be honest, a consumer with a 12-gallon gas tank in his or her car that fills up twice a week is saving all of $4.80 per week compared to this time last month. In today’s world, that’s about enough to buy one pizza with some toppings a month. In other words, it will take more pronounced declines in gas prices to make a meaningful difference for those investors that resonate with our Middle-Class Squeeze investing theme.

What to watch next week

In looking at the calendar for next week, we have the Thanksgiving holiday, which long-time subscribers know is one of my favorites. While the stock market is only closed for that holiday, we do have shortened trading hours next Friday – better known as Black Friday – and that will kick off the race for holiday shopping. That means we can expect the litany of headlines over initial holiday shopping sales over the post-holiday weekend as we ease into Cyber Monday. And yes, I will be paying close attention to those results given our positions in Amazon and UPS.

Before we get to share our thankfulness with family and friends, we will have a few economic reports to chew through including October Housing Starts, Durable Orders and Existing Home Sales. This week even Fed Chair Powell recognized the softening housing market as a headwind to the economy, and in my view that sets the stage for yet another lackluster housing report next week. Inside the Durable Orders report, we’ll be watching the all-important core capital goods line, a proxy for business investment. The stronger that number, the better the prospects for the current quarter, which tends to benefit from “use it or lose it” capital spending budgets.

On the earnings front next week, we will continue to hear from retailers, such as Best Buy (BBY), Kohl’s (KSS), Ross Stores (ROST) and TJX Companies (TJX). With regard to our own Costco Wholesale (COST) shares, we’ll be paying close attention to results from competitor BJ Wholesale (BJ). Outside of those retailers, I’ll be listening to what Nuance Communications (NUAN) has to say about the adoption of voice interfaces and digital assistants next week.