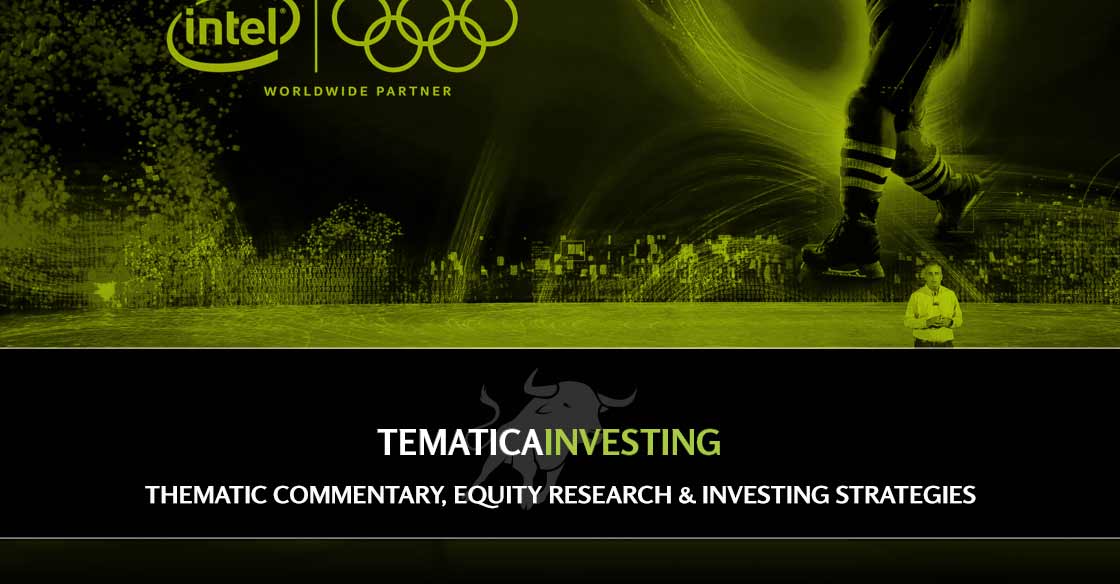 Welcome to this week’s issue of Tematica Investing, where we leverage our proprietary thematic lens to invest in well-positioned companies when it comes to our investment themes.

Over the last week, we’ve seen one of the best starts to a new trading year in some time, and the Tematica Investing Select List has been benefitted from not only that start but news being made at the currently occurring annual technology tradeshow better known as CES 2018. I’ll recap some of the meaningful announcements below in a minute, but the impact of those results have moved our positions in Universal Display (OLED), Applied Materials (AMAT), Nokia (NOK) and AXT Inc. (AXTI) higher over the last week.

These moves and the causes behind them have me once again revisiting my price targets on OLED and AMAT shares to the upside. Confirming data will likely be had in the coming days as 4Q 2017 earnings begin in earnest next Tuesday. As I discussed in this week’s Monday Morning Kickoff, the likely scenario is we see U.S. listed companies offer an upbeat outlook and use the benefit to be had from tax reform to boost 2018 EPS expectations. On an annual basis, those tax reform related benefits should more than outweigh the cold snap weather and winter storm Grayson disruptions that we have likely encountered with restaurant, retail and construction companies. This means that at least in the near-term investors will need to be choosey, hwoever, the net effect should see the stock market melt higher, especially if more Wall Street strategists boost their price targets for the S&P 500, the proxy for the overall U.S. stock market. I expect this to be the likely scenario.

My perspective that I laid our in this week’s Monday Morning Kickoff remains – I continue to suspect expectations could be getting ahead of themselves given the recent climb in consumer debt levels and continued growth in the lack of qualified workers that could hamstring business investment in the coming months despite lower taxes. The strategy that we’ll follow near term is to listen to the data and look for opportunities – companies at prices that offer a skewed risk-to-reward proposition that is in our favor. It has been that discipline married with Tematica’s thematic lens that has steered us clear of such 2017 disasters as GoPro (GPRO) and Blue Apron (APRN).

Watching the Fed minutes this afternoon

Later today, we will receive the next iteration of the Fed’s FOMC meeting minutes. While we know the policy impact from the December meeting, I’ll be interested in seeing more on to what degree the Fed factored in tax reform into its GDP forecasts, and what it sees as some of the swing factors to watch.

While CES 2018, the annual technology trade show held in Las Vegas that features more than 4,000 exhibitors, officially got underway yesterday, we’ve received a number of announcements in the last few days that have sent tech shares in general, and several of our holdings, higher.

Starting with TVs, which are one of the more high-profile items to kick off the annual gathering, we are starting to see artificial intelligence (AI) embedded into these devices. For example, is adding both Alphabet’s (GOOGL) Google Assistant and Amazon’s (AMZN) Alexa to its latest 4K OLED and Super UHD LCD TV lineup. But TVs aren’t the only things that will embed AI in the coming year – yesterday it was announced by Moen that its cloud-based, Wi-Fi enabled shower system “U by Moen” will add support for Apple’s Siri and Amazon’s Alexa AI assistants in the first half of 2018.

Outside of Moen, both Kohler and Whirlpool (WHR) are also bringing voice activation capabilities to their smart kitchen, bath and appliance products. No stranger to voice assistants in its products, Whirlpool is going one step further as the appliances it is debuting at CES this year can be controlled using Alexa or Google Assistant. Per Whirlpool, its offering includes “dishwashers that can be set and started remotely by voice, refrigerators that homeowners can change temperature settings on using a voice assistant, and washing machines that let the user check with Alexa to see how much time is left on a cycle.”

This is a first pass at the CES news flow and I’ll have more over the coming days, so be sure to check back at TematicaInvesting.com for those thoughts.

That is poised to drive semiconductor manufacturing utilization rates higher and bodes well for incremental orders at semi-cap company Applied Materials (AMAT), which is also benefitting from the ramp in organic light emitting diode display demand I noted above. With AMAT shares trading at just 13.5x on expected 2018 earnings, I’m once again reviewing my $65 price target with an upward bias.

I also see Amazon making a significant “land grab” with its Alexa voice assistant, which, in our view, bodes very well for continued growth in Amazon’s Prime membership and the company capturing consumer wallet share. 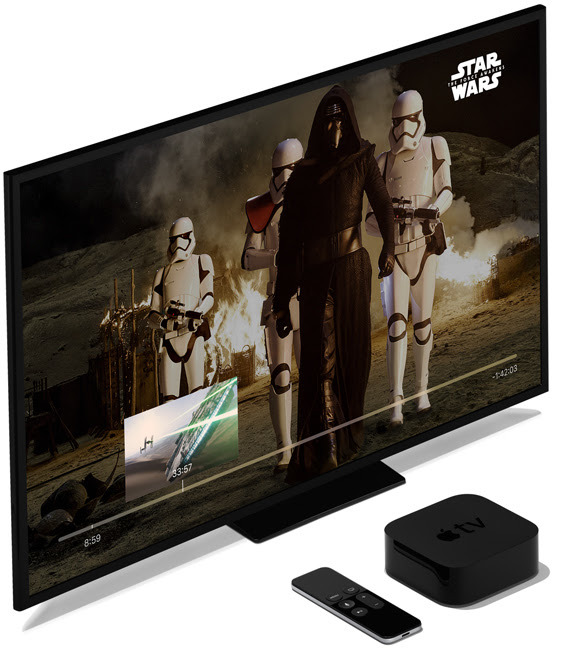 Through our thematic lens, we see this as Content is King meeting the Connected Society, a theme that has led to much creative destruction over the last several years. With Netflix (NFLX), Amazon (AMZN) and now even Apple (AAPL) moving into proprietary content that is streamed to wherever and whenever consumers want, perhaps it’s about time the movie studios ranging from Sony (SNE) to Disney (DIS) and 21st Century Fox (FOXA) get on board. Should it come to pass, it will smack Regal Cinema (RGC), AMC (AMC) and other movie theater businesses right in the high margin snack business. We suspect the Cash-strapped Consumer is hoping for such a move to happen.

Movie studios looking to set up early-access rentals with companies like Apple and Comcast may reportedly push ahead with those negotiations and skip revenue sharing with theater chains, if the latter don’t reduce their demands.Early-access rentals would let people stream movies through services like iTunes just weeks after their premieres, possibly while they’re still in theaters. To appease exhibitors, studios have discussed a revenue split, but balked at proposed long-term commitments up to 10 years, according to Bloomberg sources. For the end customer, early rentals would likely cost between $30 and $50. 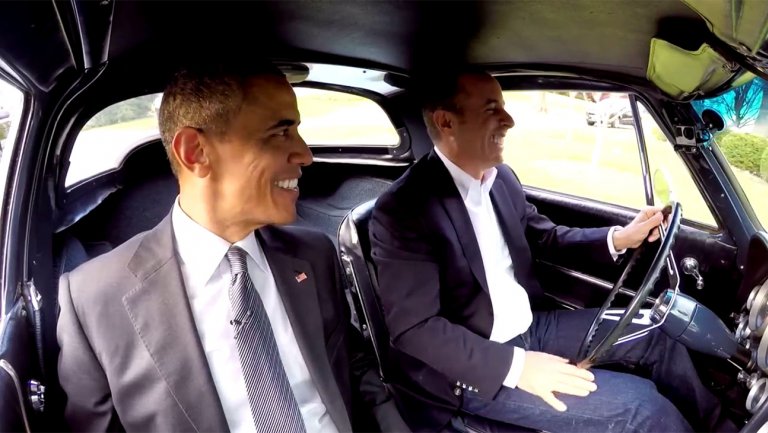 There is little question that streaming content is altering the playing the field, not just how people consume audio and video content, but increasingly where certain content can be found. First, it was movies, then TV shows, but as back catalogs were seemingly pervasive, streaming services like Netflix, Hulu, and Amazon have looked to differentiate themselves through proprietary content. It used to be as Bruce Springsteen sang, “57 channels and nothin’ on,” but that has morphed into hundreds of channels that need to be filled. The end result is an arms race for quality content that is likely to hasten the switch to streaming video services from traditional broadcast and cable networks. If asked, “What’s wrong with that?” for Seinfeld jumping ship to Netflix, we would say nothing… nothing at all.

Jerry Seinfeld is headed for Netflix.The comedian has signed a multifaceted production deal with the streaming giant, The Hollywood Reporter has learned. Under the pact, Seinfeld’s award-winning Crackle series Comedians in Cars Getting Coffee will move with new episodes to Netflix, with the comedian also set to film two new stand-up specials exclusively for the streamer.

The Seinfeld deal marks the latest investment in comedy for Netflix, which also shelled out $20 million each for a pair of Chris Rock stand-up comedy specials. Netflix’s entry into the stand-up space has created a growing arms race to land top talent in an increasingly competitive landscape against featured players Comedy Central, Showtime and HBO, among others. Other comedians who recently have gone to Netflix include Amy Schumer, who made a name for herself via Comedy Central, and Dave Chappelle.

The deal is a blow to Sony Pictures Television’s little-watched streaming service Crackle, which had been the exclusive home for Comedians in Cars, with Seinfeld’s deal with the independent studio expiring.