Weakening GDP Expectations for the Remainder of 2019

Looking back over the last few weekly issues, it would be fair to say they were a little wordy. What can I say, between the economic data and earnings season, plus thematic data points, there was a lot to share over the last few weeks. Today, however, I’m going to cut to the point with my comments, largely because all investor eyes and ears are waiting to see and hear what Fed Chair Jerome Powell has to say about the speed of the US economy as they look for signs over what is coming next out of the Fed.

We’ve talked quite a bit about the slowing speed of the global economy, and even though there have been some individual bright spots across the aggregated hard and soft economic data from both government and third-party sources, the slowing speed is hard to ignore. Based on the published data, domestic GDP hit 3.1% last year, and as we’ve shared recently we’ve started to see the expectations for 2019 move lower in recent weeks. Per the March CNBC Fed Survey of 43 economists and Fed watcher findings, GDP for 2019 is now expected to clock in around 2.3% — not quite cut in half compared to 2018, but dramatically lower and significantly lower than folks were looking for in the back half of 2018.

When the Fed issues its post FOMC meeting statement today, the focus will more than likely not be on the interest rate decision – almost no one expects a hike. Instead, rapt attention will be paid to the Fed’s updated economic dot plot, which will reveal how it sees the US economy shaping up. Let’s remember that one unofficial aspect of the Fed’s job is to be a cheerleader for the economy, so it becomes a question of “if they are cutting their GDP forecast” how deep of a cut could we really see?

Culprits of the slowing economy and these cuts include aspects of our Middle-Class Squeeze investing theme as consumers in the US grapple with debt levels that have risen precipitously over the last several years. The consumer spending tailwind associated with our Living the Life investing theme appears to be slowing some given the rising debt levels of Chinese consumers. Governments have also run up debt in recent years as the current business cycle has grown longer in the tooth. And of course, there is the impact of currency as well as political and trade uncertainties, including the pushout of US-China trade talks to June.

Downside Protection is Key Under These Circumstances

In a little over 10 days, we will be exiting March, entering the second quarter and beginning the earnings season dance all over again. My concern is that given the above and the several unknowns therein, we are poised to see another earnings season during which aggregate expectations will be adjusted lower. Case in point, with the  US-China trade agreement timetable slipping and slipping, it becomes rather difficult for a company to factor any resolution into its guidance, especially when the terms of the agreement are unknown.

Despite all of the above, the domestic stock market has continued to chug higher, once again approaching overbought levels, even though 2019 EPS cuts for the S&P 500 have made the market even more expensive than it was as we exited 2018. 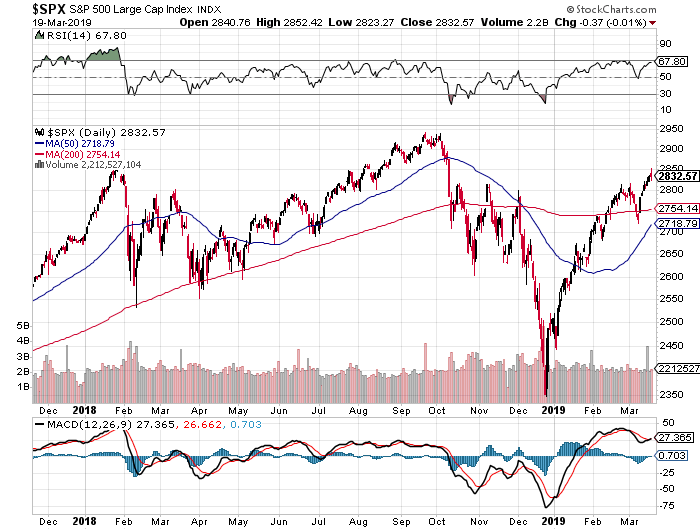 The potential poster child for this is FedEx (FDX), which saw its shares take a fall last night after the company cut its annual profit forecast for the second time in three months due to slowing global growth, rising costs from a 2016 acquisition in Europe and questions over its ability to withstand U.S.-China trade tensions and uncertainty over the U.K.’s exit from the European Union.

Not to go all Groundhog Day on you, but this looks increasingly like the situation we saw in December when I added the ProShares Short S&P 500 ETF (SH) to the Select List. If we didn’t have those shares to offer some downside protection for what lies ahead, I would be adding them today. If you don’t have any of those shares in your holdings, my advice would be to add some. Much like insurance, you may not know exactly when you’ll need it, but you’ll be happy to have it when something goes bad.