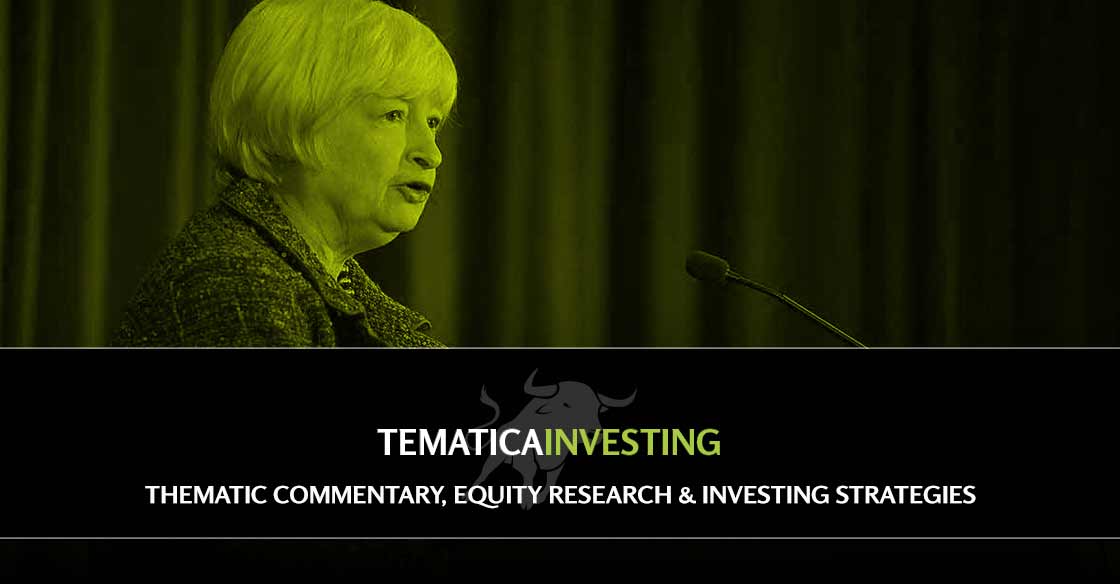 Stocks continued to inch higher over the last several days ahead of today’s next Fed policy meeting. Over the last few days, we’ve seen GDP expectations for the current quarter revised lower from economists, regional Fed banks and even companies like FedEx (FDX), which sees GDP hitting all of 2.2% this year. I continue to see the Fed taking yet another pass on boosting interest rates later today, and given the impact from the recent hurricanes, the team Tematica view is that while next potential interest rate hike could come late this year, it’s more likely going to be in 1Q 2018.

The more closely watched item in the Fed’s comments will be timing for its balance sheet unwinding, and that means parsing the Fed-speak out this afternoon. Much like interest rates, I suspect the Fed will take a pass this month on kicking that initiative off and revisit the strength of the economy at its October/November meeting, but again, more on that once we have parsed the Fed’s words. We’ll have the Tematica take and what it means for the markets as well as the Tematica Investing Select List tomorrow morning.

Keeping the market somewhat in check yesterday was President Trump’s address to the United Nations General Assembly at which he shared he will take a hard line, vowing to “totally destroy” North Korea if it threatened the United States or its allies. Nothing keeps uncertainty alive lately quite like political drama in DC. Such drams also now includes questions over the potential benefits to the domestic economy with corporate tax reform at a time when the federal budget deficit continues to climb. Let’s also remember we are on the cusp of the 2017 election season, and even as President Trump reaches across the aisle, odds are it won’t be an all “cookies and warm milk” as politicians are vying for their own jobs.  For this reason, I see tax reform more likely toward the end of 2017, which happens to be when the debt ceiling conversation will be resumed.

Earnings this week, set the stage for coming 3Q 2107 season

Over the next week and a half we will close the books on 3Q 2017 and face quarterly earnings. Before too long the year-end holidays will be upon us. Last night we had a few earnings reports from FedEx, Bed Bath & Beyond (BBBY) and Adobe Systems (ADBE), and today all three stocks are trending lower. Part of the reason for FedEx missing expectations last night was the disruption it faced due to its recent cyber attack. Such attacks are yet another reminder that the cybersecurity aspect of our Safety & Security theme is a form of insurance in our Connected Society. This keeps us long-term bullish on PureFunds ISE Cyber Security ETF (HACK) shares.

Despite a beat at Adobe, the company signaled softer than expected growth for its cloud business. When paired with revenue guidance that was in line with expectations and the stocks sky-high valuation near 40x 2017 earnings per share, it’s not surprising to see ADBE shares trading off today. I point this out because it is another example of good news being ill-received on Wall Street — another reason to think the next few weeks will continue to be volatile.

While earnings reports from FDX, BBBY and ADBE will factor into our larger thinking, what I found far more interesting was the new partnership announced between thematic investing poster child Amazon (AMZN) and retailer Kohl’s (KSS), which includes Kohl’s offering to accept returns for Amazon customers at 82 stores in Los Angeles and Chicago. This is yet another example of a retail-facing company looking to partner with Amazon, and to me, it speaks to the logistics power that is one of Amazon’s core strengths.

Perhaps the management team at Kohl’s saw what I did in the last week’s August Retail Sales Report –  continued pain at department stores as shoppers continue to shift spending to digital platforms. As much pain as we here at Tematica see for brick & mortar retailers in the upcoming year-end holiday shopping season, we see a similar amount of opportunity for Amazon given its footprint expansion over the last year.

One of the positions that has been lagging this market move higher is Food with Integrity company Amplify Snacks (BETR), and we used August pullback to improve our cost basis. Since that scaling, BETR shares have once again languished, but commentary last week from United Natural Foods (UNFI) offered a confirming perspective. In United Natural’s earnings report it shared its supernatural net sales were up approximately 6.8% year over year and its supermarket channel net sales increased 8.3% year over year in the quarter. To me, that points to consumers continuing to embrace food that is good for you and bodes rather well for healthy snacking options offered by Amplify. Anecdotally, after visiting several Whole Foods locations over the weekend we can attest to a rebound in traffic and shopping bags.

We will continue to be patient with Amplify Snacks (BETR) shares as the company expands its product offering as well as its reach beyond the U.S. As we have said, we see Amplify as a potential acquisition candidate for PepsiCo (PEP), Snyder’s-Lance (LNCE), Post Holdings (POST), General Mills (GIS) or another snack-food company as they look to expand their presence in the “better for you food” snacking category.

Recapping moves made earlier this week

As we get ready for what lies ahead over the coming weeks, we made some maneuverings with the Tematica Select List earlier this week. Those moves included adding two new Buy rated positions – LSI Industries (LYTS) and Nokia Corp. (NOK) – and we exited shares of CalAmp Corp. (CAMP). I’d note that one day after we added NOK shares to the Select List, UBS unveiled a “buy” rating on the shares.

Also, this week, our shares of Applied Materials (AMAT) were upgraded to “outperform” at RBC Capital Markets with a new $55 price target; if you’re thinking “that $55 price target sounds familiar” it’s because it has been our AMAT price target for months. As a reminder, Applied will host its 2017 Analyst Day on Sept. 27, and I see that offering an upbeat dialog for both its display  semiconductor capital equipment businesses

Speaking of displays and price targets, yesterday we increased our price target on Universal Display (OLED) shares to $175 from $135, and we are evaluating potential stop loss levels for this position.

As we close this week’s issue, we’d suggest subscribers that missed yesterday’s comments on the current corn harvest as well as a potential longer-term disruptor to corn supply-demand dynamics and what it means for the Teucrium Corn Fund (CORN) shares on the Select List give them a whirl.

This morning we received the Challenger Job Cuts Report as well as ADP’s view on May job creation for the private sector. While ADP’s take that 253,000 jobs were created during the month, a nice boost from April and more in line with 1Q 2017 levels, we were reminded that all is not peachy keen with Challenger’s May findings. That report showed just under 52,000 jobs were cut during the month, a large step up from 36,600 in April, with the bulk of the increase due unsurprisingly to retail and auto companies.

As Challenger noted in the report, nearly 40% of the May layoffs were due to Ford (F), but the balance was wide across the retail landscape with big cuts at Macy’s (M), The Limited, Sears (SHLD), JC Penney (JCP) and Lowe’s (LOW) as well as others like Hhgregg and Wet Seal that have announced bankruptcy. In total, retailers continued to announce the most job cuts this year with just under 56,000 for the first five months of 2017. With yesterday’s news that Michael Kors (KORS) will shut 100 full-price retail locations over the next two years, we continue to see more pain ahead at the mall and fewer retail jobs to be had.

Sticking with the Challenger report, one of the items that jumped out to us was the call out that,

“Grocery stores are no longer immune from online shopping. Meal delivery services and Amazon are competing with traditional grocers, and Amazon announced it is opening its first ever brick-and mortar store in Seattle. Amazon Go, which mixes online technology and the in-store experience, is something to keep an eye on since it may potentially change the grocery store shopping experience considerably, “

In our view, this means the creative destruction that has plagued print media and retail brought on by Amazon (AMZN) is set to disrupt yet another industry, and it’s one of the reasons we’ve opted out of both grocery and retail stocks. The likely question on subscriber minds is what does this mean for our Amplify Snack Brands (BETR) position? In our view, we see little threat to Amplify’s business; if anything we see it’s mix of shipments skewing more toward online over time. Not a bad thing from a cost perspective. We’d also note that United Natural Foods (UNFI) is a partner with Amazon as well.

We’d also note comments from Chipotle Mexican Grill (CMG) that its recent cybersecurity attack hit most Chipotle restaurants allowing hackers to steal credit card information from customers. In a recent blog post, Chipotle copped to the fact the malware that it was hit with infected cash registers, capturing information stored on the magnetic strip on credit cards. Chipotle said that “track data” sometimes includes the cardholder’s name, card number, expiration date and internal verification code. We see this as another reminder of the down side of what we call both our increasingly connected society and the shift toward cashless consumption. It also serves as a reminder of the long-tail demand associated with cyber security, and a nice confirmation point for the position PureFunds ISE Cyber Security ETF (HACK) shares on the Tematica Select List.